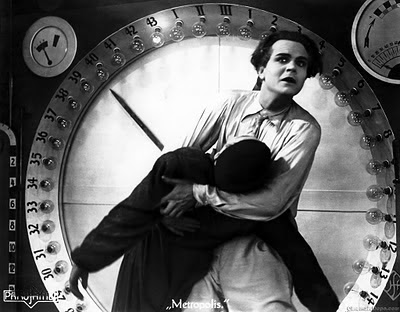 Two sold-out screenings in two days: not a bad way to start 2012!

On New Year's Eve, a screening of 'Metropolis' (1927) at Red River Theatres in Concord, N.H. proved popular enough for us to schedule an encore screening later in January. That way people who were turned away would have at least a chance to catch the film later: specifically, on Saturday, Jan. 21 at 7 p.m. Admission is $15. At that point, Red River will also be showing 'The Artist' (2011), so for one night, two of the theater's three screens will be silent films. Imagine that! 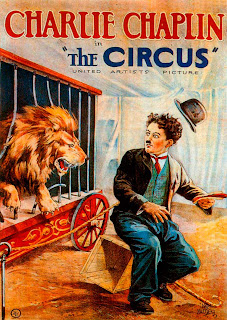 Then, on New Year's Day, this afternoon's screening of Chaplin's 'The Circus' (1928) at the Wilton (N.H.) Town Hall Theatre attracted a standing-room-only crowd, the largest audience ever for our monthly silent film series there. It was a nice way to celebration the opening of the theater's big anniversary year. They've been showing films there since 1912, so this year marks the start of Wilton's second century of cinema.

In both cases, I think the energy of the crowd somehow got translated into the music that came out of me. (For 'The Circus,' we used Chaplin's own score, but I accompanied two short subjects beforehand, Keaton's 'One Week' and Laurel & Hardy in 'Big Business.') There's something about a full house that makes you want the accompaniment to be first rate, or at least that's the case with me. And I found that both screenings were pretty successful. 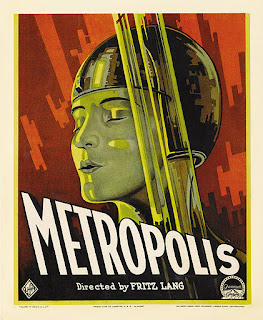 'Metropolis' is a massive film to do music for, but I had strong material (some from an earlier screening, some I developed new) and that helped it all hold together. The most important was what I thought of as the "mediator" theme -- important not only because it goes with Fredrick, the male lead, but because it's an aspirational melody which helps set the tone anytime any character wants something. Plus, the tune is built mostly out of arpeggiated chords, meaning it could easily function as accompaniment or counterpoint to other tunes I used: a "machine" melody with five rising and falling notes, a "hedonistic nightclub" tune used to represent base emotions, the Dies Irae from the Catholic Mass for the Dead (handy in any forboding situation, and fun to harmonize in various ways), and a kind of tick-tock melody for Freder's father, the master of Metropolis, helpful in capturing his character and in illustrating any situation in which someone is facing options or difficulties that are somehow related to him. (Which means anything, really.)

In relatively quiet sections, I'm surprised how all of this music can somehow fit together and play a role in scoring the emotional path of a scene. One theme will morph into another, sometimes in a weird key modulation, and then trail off in another direction, always to illustrate the ebb and flow of what's happening on the screen: not physical actions so much as the emotional temperature of a scene.

Because 'Metropolis' is set in THE FUTURE, I pushed the synthesizer into unusual territory for me, though nothing outrageous. Instead of the usual orchestral texture, a few sequences were done with some semi-weird combo settings to create the right atmosphere. 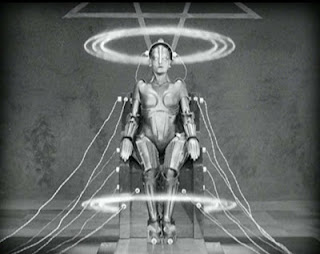 The most successful example of this is the famous laboratory scene where Rotwang transfers Maria's personality to his "Machine Man." For this, I used a setting called "Random Blocks" that has a kind of bubbly xylophone texture to it, and also a prominent echo every time a note is struck. By continuing to strike the note in rhythm with its own echo, or playing a melodic line with this going on, it's possible to get a very eerie soundscape going. This happened quite effectively on Saturday night and I was very pleased with how it came out, especially because tension was created not through volume but by quietly stacking chords, pulling in and out of dissonances, and generally adding patterns that had more and more notes.

On the down side, I think I peaked too early. 'Metropolis' has an extended triple climax. Three big scenes follow in succession -- the workers destroying the machines, the underground city getting flooded, and then the final confrontations in the streets and the cathedral -- any one of which would serve as a satisfying silent movie climax. But in 'Metropolis,' they follow one after another, and if you push too far too early, you're left with nowhere to go while there's still plenty of film left. I'm afraid I ran into this problem, and because I didn't pace it right, the last parts of the film may not have had the impact that they otherwise might.

Overall, I gave myself a B-, mostly because I felt I didn't plan it out well enough to help build excitement in the final sequences. Instead, I went too far too fast, which tends to tire out people's ears and this diminishes the film's impact. (Also, I messed up playing 'Auld Lang Syne' during the New Year's Eve champagne toast afterwards.)

As for 'The Circus' in Wilton, N.H.: I spend so much time accompanying programs in this venue, so it's instructive to just attend a screening and listen once in awhile. One thing that struck me was how sparse Chaplin's music could be at times: often just a little rhythmic vamp, and sometimes even less than that, especially in a big comic scene. It's a good lesson. Overall, I find Chaplin's silent film scores (the original ones for 'City Lights' (1931) and 'Modern Times' (1936), as well as ones he did later such as for 'The Circus') to be effective, but not very daring harmonically. But he knew what he wanted and it's a treat to hear what he came up with, even if in the case of 'The Circus' it was four decades after making the picture.

Alas, our screening was marred by a technical glitch. The disc, when projected at the 4:3 ratio, had everyone on screen squished vertically. I ran back and asked Dennis Markevarich to fix it, which he did by changing the setting to 16:9! This corrected the proportions, but the resulting image was missing about 10 percent from the top and from the bottom. Rats! Why does this happen? The good news is that most people seem not to have noticed, and there only a few key scenes in which the whole image was necessary, including shots of Chaplin on the tightrope.

Still, it's difficult enough to revive a silent film and show it properly to an audience. With all the things that can go wrong, it's a miracle that we can show 'The Circus' at all!
Posted by Jeff Rapsis at 10:00 PM