In which I meet Mr. Kevin Brownlow 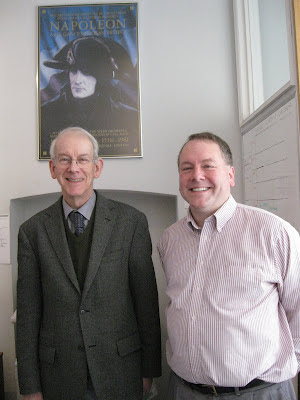 I'll get straight to the point. I met God! Or, in terms of silent film, I met the godfather.

Yes—on Friday, Feb. 17, I met film preservation icon Kevin Brownlow at the London office of his firm, Photoplay Productions. (The photo above is Take 1. Others are below.) We spoke for only a few minutes, as Mr. Brownlow was on his way to an event in Ireland. But it was thrilling to thank him personally for all his work on behalf of silent film, and also congratulate him on his Academy Award last year.

I'm sure I came off as a lunatic, but I imagine that's nothing that Mr. Brownlow isn't used to, given the passionate nature of much of the silent film community. But really — this man, author of books such as 'The Parade's Gone By' and creator of documentaries such as 'Buster Keaton: A Hard Act to Follow' — has set the gold standard for showing the world the lasting value of the silent film medium. 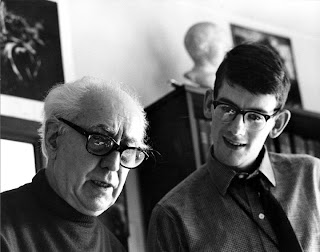 And then there's 'Napoleon.' Brownlow has spent nearly his entire life recovering and restoring this 1927 masterpiece of French director Abel Gance. (Here's a picture of an elderly Gance and a young Brownlow back in the 1970s.) The reassembled picture now clocks in at something like 5½ hours, recreating Gance's vision and ranking as the silent film equivalent of 'Les Troyens,' the sprawling and impossibly ambitious opera by Hector Berlioz.

With its three-screen "polyvision" effects and projection demands (not to mention the need for 5½ hours of live music), few venues anywhere are equipped to properly present Brownlow's restoration. One of those is the Paramount Theater in Oakland, Calif., where this spring Brownlow and the San Francisco Silent Film Festival will run 'Napoleon' with full orchestra just four times over two weekends: Saturday & Sunday, March 24 & 25 and March 31 & April 1.

These screenings, the first in the U.S. since an earlier (and shorter) version of 'Napoleon' went on tour in the early 1980s, are likely to be the only such events in North America this generation. So we're heading out for the screening on Sunday, April 1, which made the chance to actually meet Mr. Brownlow beforehand an extra special thrill.

What was I doing in London? Just in town to take in some theater and celebrate the anniversary of my proposal to my wife-to-be, which took place in February, 1995 in Hyde Park. (In front of the Peter Pan statue, if you can believe that.) But for awhile now I've been inquiring about renting some of Photoplay's 35mm prints of silents, which in some cases are the best available anywhere. One example: Brownlow's print of his own restoration of 'The Birth of a Nation' (1915), which I'd like to screen (and provide live music for) in Boston on some future Martin Luther King Day.

To do this, last summer I began corresponding via e-mail with Sophie Djian of Photoplay, who looks after the office for Brownlow and his business partner, Patrick Stanbury. We haven't settled on terms just yet, but when making plans to visit London, I figured it couldn't hurt to stop by and say hello in person.

At the time, I had no idea that the entire staff of Photoplay Productions consisted of just Sophie, Patrick, and Kevin. So when Sophie mentioned that "Kevin" would be out of the office on the day I planned to stop by, at first I didn't realize just she whom she was talking about.

Then it dawned on me — of course, it was Kevin Brownlow himself! I replied that I would still like to drop in, and Sophie graciously encouraged me to do so.

So, on Friday, Feb. 17, I found myself in a London taxi (running late for the noon meeting, no time for public transit) threading its way through the Primrose Hill neighborhood north of Regents Park, searching for 21 Princess Road. (Apparently this area is not part of the required "knowledge" for London cabbies.) We finally got as close as we could, given the tricky one-way streets, and then I hoofed the short distance to Photoplay's office — a relatively modest storefront tucked in among shops and other local businesses. Sunset Boulevard this was not. 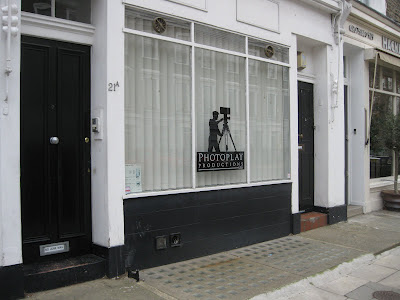 Sophie, recognizing me from her perch inside the window, let me in the locked front door. The office had the air of an overcrowded library. Piles of cardboard document boxes rose from the floor, with walls hidden behind bookshelves, file cabinets, and vintage film posters. Here's a badly lit photo of the place, with Sophie at her desk. 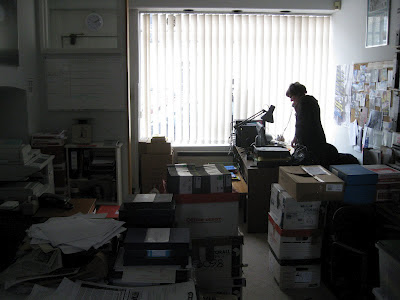 Despite all there was to look at, my attention went almost immediately to a white-haired gentleman working at a desk tucked away in a back corner.

Delighted with the chance to meet Mr. Brownlow, I strode right over to shake his hand and say a few words. Despite the unexpected intrusion, he was courteous and seemed appreciative as I tried (unsuccessfully) not to gush. After thanking him for work that's been a major influence on me, we chatted briefly about getting that 'Birth of a Nation' print to Boston (Mr. Brownlow immediately reminded me it required proper projection, meaning a triple-bladed shutter and variable speeed), we posed for a few quick in-office photos of Brownlow, me, and Napoleon, courtesy a poster hanging behind us. Here's one in which he has an "I've got to get to Ireland this afternoon" look on his face. 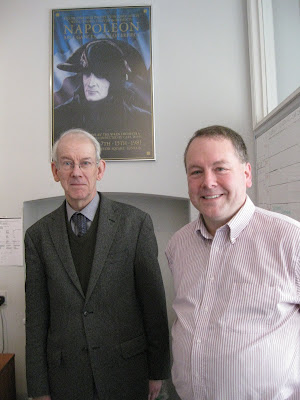 This experience produced Mr. Brownlow's most memorable remark of our brief exchange: "That camera sounds like a pigeon!" We talked about how I'm going to the April 1 screening of 'Napoleon' in California. We talked a bit about how he's scheduled to be a guest at the next "Keaton Festival," slated for September in Iola, Kansas, and how he was looking forward to it.

And by then I sensed he was really eager to get back to his work, so I thanked him and then stepped back into Sophie's care. Thus endeth my visit with Mr. Brownlow, but not to his world. I had promised Sophie lunch, and so — after she reminded her boss he was due at the airport in a very short time — we walked a few blocks to "Trojka," a local Russian restaurant and a favorite of Mr. Brownlow, apparently. 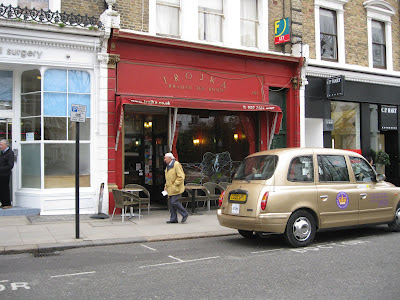 Over Ukrainian goulash (I think Sophie went for the "Gypsy Latke"), we talked silent film and Photoplay and so much else, all of it pleasant. Sophie's a lively woman, originally from France, and passionate about cinema of all eras. We then meandered back to Photoplay's office, now minus Mr. Brownlow. Sophie offered to show me around, so I got a tour.

First, here's Kevin's workdesk, where he does a lot of his writing. Notice the electric typewriter still in the position of prominence, though a fairly old model laptop occupies a competing perch. 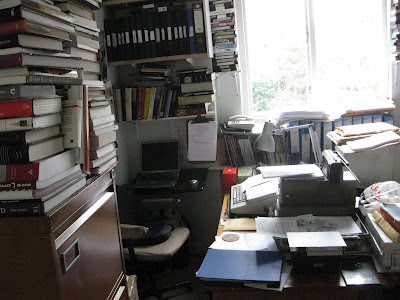 So this is where so much magic has happened, at least since 1982, when Photoplay took up residence here. Below is a closer view of Kevin's cockpit. By the typewriter, note the boxes of index cards — once a basic organization tool for all writers, but now less commonly used. 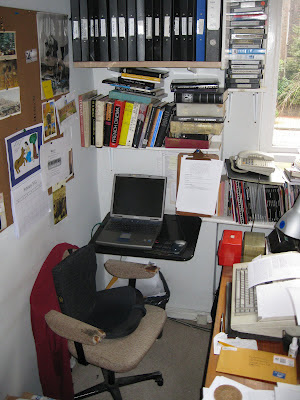 The air of pilgrimage to holy cinematic ground intensified as we went down a narrow staircase to the basement, which houses an editing suite and the Photoplay film vaults, which are behind a glass door and climate-controlled. The basement, as in many older retail properties, extends out under the sidewalk, presumably to make it easier for deliveries to be put in storage in bygone days. This area under the sidewalk, a series of brick chambers, is where the Photoplay 35mm prints are stored. 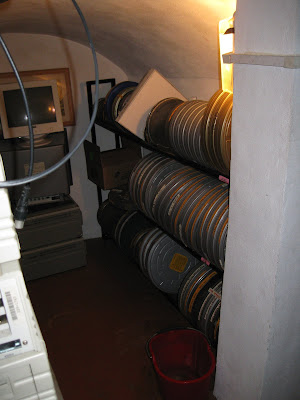 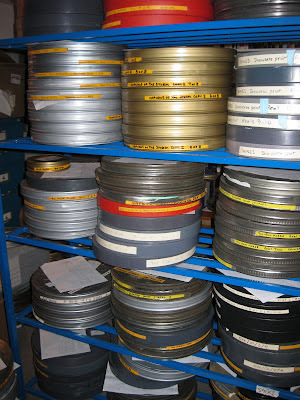 We went through the doors for a closer look. Directly above us was the sidewalk, with light coming through glass tiles set in the pavement. (See the photo below.) While looking at the stacks of film cans of films such as 'Orphans of the Storm' (1921) and 'The Iron Horse' (1924), it was weird to occasionally glimpse the outline of people's feet overhead — I wonder if passersby realize how much film history they're stepping over. 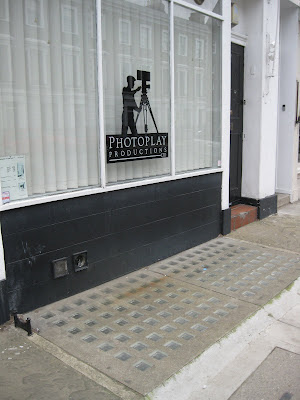 In another space in the back, metal shelves held oversized document boxes that turned out to contain orchestra scores and parts for a large number of silent film scores. This was of special interest to me. At random, we pulled out a box containing music for 'Sunrise' (1927), the great F.W. Murnau film, and gave the conductor's score a cursory glance. It was heavily scored for full orchestra, with the pages resembling a Richard Strauss tone poem.

That's all that was possible, alas, as it was now 2:30 p.m. and I was due at a 3 p.m. performance of the brand-new staging of 'Singin' in the Rain' at the Palace Theatre on Charing Cross Road, back down in the West End.

Even the appeal of pawing over scores used by Carl Davis and other greats couldn't compete with the fear of being late for an expensive musical, so off I went, bidding Sophie goodbye and hailing a cab back into the city for 'Singin' in the Rain.' (Wow, yet another silent film-related activity! Am I in a rut?)

I hope there's at least a chance to see and greet Kevin Brownlow again in San Francisco, but odds are he'll be mobbed the entire time, and by the final showing of 'Napoleon' (the one we're attending) he'll probably be exhausted as well. But he's a link to so many of the personalities that loom so large from the silent era, having met them, interviewed them, helped restore their films, and more. Plus he seems like a genuinely nice person, and it was a pleasure to make his acquaintance. Maybe I'll get to the Keaton Festival in Iola this fall and follow up then — you never know.

If so, I'll try to keep things light. Maybe I'll ask him if he made that plane to Ireland. But if he missed it because of me, maybe that's something I don't want to find out. Perhaps it's best for me to take a cue from Mr. Brownlow's lifelong work, and just remain silent. 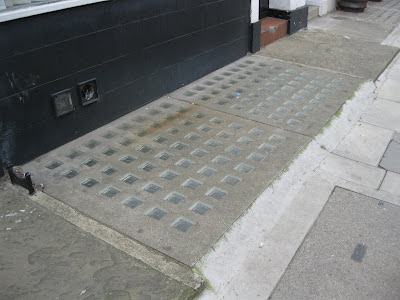