Completing a busy stretch of accompaniment 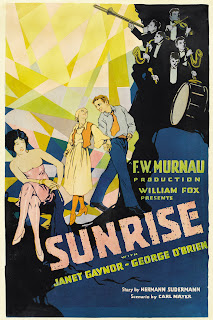 This past Sunday's screening of 'Sunrise' (1927) in Wilton, N.H. marked the completion of a fairly intense six weeks of silent film accompaniment. Starting with 'Metropolis' (1927) on New Year's Eve in Concord, N.H., I did 14 separate shows at venues that ranged from smalltown theatres to a sci-fi/fantasy convention in Boston, with an educational farm in New York State mixed in for good measure.

For a complete round-up, check out the 'Info on Past Screenings' page on this blog. The numbers don't add up, by the way, because the public list doesn't include two Friday morning screenings I did for a film class at Southern New Hampshire University. Silent film at 9:30 a.m.!

One reason I booked so many screenings during this time was that I'm hoping it helps me get ready for two high-profile public accompaniment gigs that are well beyond my usual orbit. The last weekend of February sees me at the Kansas Silent Film Festival, where I'll do music for Harry Langdon's 'Tramp Tramp Tramp' (1926) and some short films. And then mid-March finds me as one of a trio of accompanists at Cinefest, the large vintage film confab held each year in Syracuse, N.Y.

This last one is a bit daunting because my colleagues are two extremely capable musicians whom I consider absolutely tops in the field of silent film accompaniment: Phil Carli and Andrew Simpson. I've long admired Carli's work, which I've heard live and on many recorded scores. I'm less familiar with Simpson's music, but what I've heard has been top-notch. Still, they both hold doctorates in music and have long lists of accomplishments to their credit.

And then there's me. How do I get into these things? But still, I'm eager to go and contribute what I can, and benefit from the experience. And one way to prepare for this is what I did during the past six weeks: just play a lot of live shows and get the momentum going so there's something to work with when the big gigs arrive.

I find that it really helps. The last couple of screenings produced what I thought were splendid scores with minimal preparation. A double feature of 'The Sheik' (1921) and 'Son of the Sheik' (1926) on Thursday, Feb. 9 in Plymouth, N.H. fell together amazingly well, and 'Sunrise' (1927) on Sunday, Feb. 12 in Wilton, N.H. was a very satisfying effort. (For that one, I even managed to use my grandmother's old brass school bell to lend atmosphere for Murnau's shots of the village in sihouette.)

All of this was prompted, of course, by Valentine's Day, which is tomorrow (Tuesday, Feb. 14) as I write this. Last week's Valentino program at the Flying Monkey Moviehouse up in Plymouth drew about 35 people—not a bad figure, at least when compared to the grand total of five (five!) people who attended the January screening of 'The Birth of a Nation' at the same venue.

I had previewed 'The Sheik' that afternoon but did not prepare any special thematic material, just to see how I did playing the film 'cold.' Right off the bat, I thought I managed to set the atmosphere perfectly with a modal melody played in one of my synthesizer's 'World Music' settings, and things stayed solid from then on. With each change of scene, I shifted between World Music, Traditional Orchestra, and Strings, and each time I hit it right on the money. Created some pretty good stuff in the strings, I thought, when things begin to get hot and heavy between Valentino and Agnes Ayres—one sustained dissonance after another underneath climbing scales all based on the modal melody I started with. 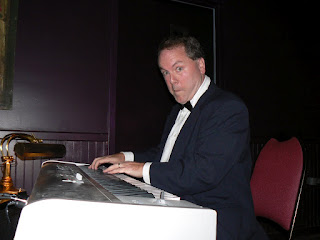 I was less prepared for 'Son of the Shiek' but it still came out very well, I thought. (That's a goofy picture of me at the Flying Monkey, by the way, just to show how I don't prepare my personal appearance, either.) Most miraculously, I came up with a "running figure" for the first scenes of Valentino riding his horse, and this little figure proved to be extremely versatile, gradually becoming the heart of the score. And though as a matter of pride I try to create new material for the second picture of any double feature, because this sequel featured Valentino playing his father (the Sheik in the first film), I could justify reuse of the "sheik" theme from the first movie.

'Son' is a bit harder to score effectively, I think, because it's a richer and more confident film, with more humor embedded in it, and far less mannered than the original. But I stayed with it and tried to keep it all going throughout the program, which amounts to more than 2½ hours of film (and music) without a break.

I prefer no intermission not because I'm a sadist, but because I believe that the best silent film casts a spell, and once that spell is broken (by an intermission), it takes time to recover. So I generally like to play right through any program without a break. In terms of endurance, the Valentino double feature felt like 'The Birth of a Nation' with sand, but actually the time seems to fly. Once I'm 'in the zone' and absorbed in responding to a film musically, time ceases to exist.

This approach does have its drawbacks. Prior to 'The Birth of a Nation' in January, I had drunk maybe a half-dozen cups of tea in an unheated Chinese restaurant (ah, the glamour of New Hampshire in mid-January), and then found myself in, er, extreme discomfort starting about a half-hour into the show. (I remember thinking to myself, "Cripes, the Civil War hasn't even started yet!") So for me, 'The Birth of a Nation' was uncomfortable to watch, but not for the usual reasons.

For the Valentino double feature, I learned my lesson: fluids to a minimum, and visit the men's room just prior. And because we're comparing 'Birth,' let me point out that 'The Sheik' is full of blatant racism that's no less embarrassing than anything D.W. Griffith put before a movie cameras. In 'The Sheik,' not only are "Arabs" portrayed as uncivilized and uneducated savages (oh, but they're happy savages), but the film's love story is resolved only at the end, when Agnes Ayres observes that Valentino has "small hands for a Arab," which prompted the revelation (from Adolph Menjou, of all people)that the Sheik is actually the son of English and Spanish nobility. Oh, such joy in Western Civilization Land! Our audience couldn't help but laugh at this, and I didn't blame them.

'Sunrise' is a film I've wanted to do for a long time, but wanted to wait until I felt I had the technique and equipment and skill to do it justice. So putting it at the end of this run of screenings was kind of like my "final exam" prior to the gigs in Topeka and Syracuse. I'm proud to say that I was very satisfied with how it came out—I felt the music brought out the drama in the film, helped punctuate the big moments, but didn't get in the way. We had about 100 people on hand, and afterwards more than one gave me the ultimate compliment: that the music matched the movie so well that they forgot it was being created live. Nice!

I guess I need to find a way to easily post sound files to this site, as I would love to share the thematic material I used for 'Sunrise.' It was a very symphonic score, if I do say so, with no filled-out tunes but instead a collection of cells that all proved versatile in bringing director Murnau's visions to life for an audience in 2012. There was one especially important meldodic scrap that sounded quite insubstantial at first, but later morphed quite on its own into something menacing and heart-breaking at the same time, and was immensely useful in keeping the emotional tempo of the film going along with Murnau's at-times incredible visions.

Speaking of which: I would love to visit the city portrayed by the City Woman near the start of the film, where dance bands come equipped with a half-dozen Sousaphones all swaying in unison. What is it with Murnau and horn bells? Remember the trumpet in 'The Last Laugh' (1924)? Also, there's defintely a thing in 'Sunrise' for windows: the opening glass train shed, the windows into the dance hall, and so on.

Back to the music: the only actual "tune" in the score was a Peasant Dance that George O'Brien and Janet Gaynor do near the end of the city scenes. This tune, which keeps going through my head this morning, just came to me the morning of the show, and is related to the jingle for "Sunbeam Bread" that I had been hearing on the radio all week long prior to this. Funny how things evolve and cross-pollinate.

One thing I find interesting about 'Sunrise' was how Murnau made it seem timeless. There are very few references to contemporary culture or specific locations. The city is simply a city. The country is simply the country. Is it in Europe? America? Shangri-la? There's a lake and a row boat, and a wedding in a church—simple and basic things that we still accept today as part of the landscape around us. I think that helps lend the film a universal quality that still comes through today, even though clearly many things have changed (barbershops, photographers) in the 85 years since this picture played in theaters.

Probably the funniest reaction was from a colleague of mine, who mistook Murnau's universal urban setting as some kind of science fiction conceit, which prompted this response: "What kind of city of the future has a carnival in which you heave things to make piglets go down a slide?"

Okay, so now it's time to focus on 'Tramp Tramp Tramp' and get ready for Syracuse after that. Better get out the Hanon technical exercises...
Posted by Jeff Rapsis at 9:39 AM