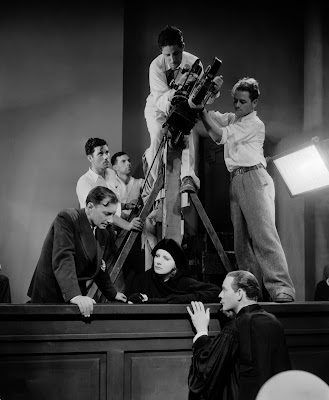 I'm looking forward to tonight's screening of 'The Kiss' (1929), a late silent that I've grown to appreciate after looking at it a few times. The screening, by the way, is Tuesday, Feb. 7 at 6 p.m. at the Manchester (N.H.) Public Library, 405 Pine St.; admission is free.

In preparing music for this flick, I've become very impressed with the visual story-telling in this picture, noteworthy as MGM's last silent release. Although it's not a spectacular blockbuster, it's a well made film that shows how fluent directors and actors had bcome in the silent film art by the late 1920s.

Visually, the film is filled with all manner of lively and creative shots: tracking shots, extreme close-ups, mirrors, and so on. But you get shifting tones even at the basic level of the rhythm of the performances, even without music.

The film's opening scene demonstrates that perfectly: a guide is taking visitors through an art gallery so fast as to be comical, but as the group finally sweeps out of frame, we are suddenly left in the midst of a torrid love scene with Greta Garbo and Conrad Nagel, setting the main plot immediately in action.

What a perfect way to jump-start a plot, to carry us breathlessly from our world into the story's world. It works well even without music! But I'll try to underscore it to bring out that contrast between the brisk comedy and intense romance.

Throughout the film, director Jacques Feyder (that's him on the right in the above photo) uses the camera and the medium of visual story-telling with creative flair. There are multiple exposures (in the tennis scene) and fantasy sequences in which Garbo re-enacts a scene in her mind, making it up as she goes along, with the hands of a clock spinning crazily out of control as she changes her mind.

Look how the scrawny detective, played by George Davis, trails Garbo by watching her reflection in store windows. And just as basic story-telling, the first time we see THE GUN in a opened desk drawer clearly sets the stage for bad things to come. Interestingly, later on we do NOT see the gun being used, but knowing where it is lends the scene immense power, even if it's staged behind a closed door.

Alas, it's not a great silent because it does rely a bit heavily on dialogue-driven intertitles, and the ending is kind of a let-down in my opinion. (Judge for yourself: come see the picture!) But as an example of how fluent the makers of silent film had become just as the medium was being phased out, 'The Kiss' stands as an excellent example.

And finally, if you're having a little trouble getting in the right spirit for Valentine's Day, then a film titled 'The Kiss' might help, too.
Posted by Jeff Rapsis at 1:47 PM