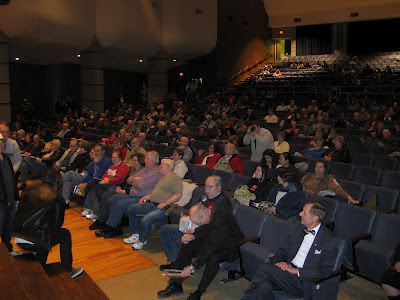 What it is: The Kansas Silent Film Festival is a wonderful annual gathering of people who enjoy silent film, held the last weekend in February at Washburn University in Topeka, Kansas. Films are screened on Friday night and then all day Saturday. (Sometimes there are additional screenings on Sundays, but not this year.) All films are shown with live music, with the acclaimed Mont Alto Motion Picture Orchestra contributing several performances each year.

How they do it: Unlike most vintage film events, admission is free, and most films are selected for general interest rather than rarity or obscurity. As a result, attendance is huge: usually at least 400 and sometimes more than 700 people (mostly local folks) fill Washburn University's White Concert Hall, where the films are shown. It's a terrific chance to experience these films the way they were intended to be seen. A large audience and live music really makes a difference. 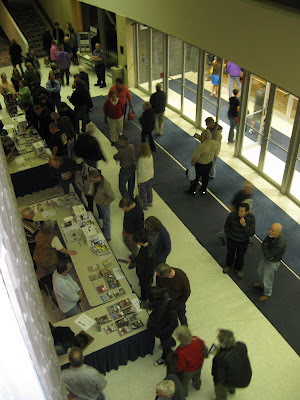 The people are great: The folks who stage this festival are a friendly bunch who go out of their way to welcome newcomers to the event and to silent film in general. The first year I came to Topeka (back in 2000, on a complete whim), I was invited to the after-festival party, and wound up carrying the prints of several of that year's films in the trunk of my rental car. My wife and I have been made to feel welcome every year since, and even now (13 years later), the organizers make an effort to welcome first-timers and include them in activities or events.

A lot of this stems, I think, from the efforts of founder Jim Rhodes (who welcomed me the first time I attended) and longtime director Bill Shaffer, who both have set a tone of friendliness that's a big part of the festival. It's shared among the many festival volunteers who make it all happen, Brigadoon-like, every year. Below, here's Bill Shaffer and longtime volunteer Enid Stendebach talking film with two fans at Bobo's Drive-In on Friday. 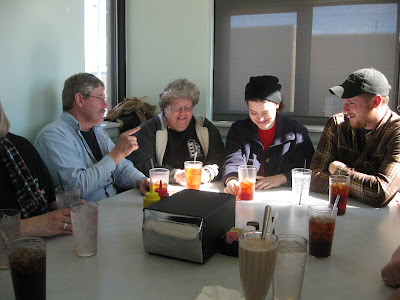 Also, it's a chance to socialize with silent film devotees from other parts of the country, although it's definitely not a collector-dominated gathering. 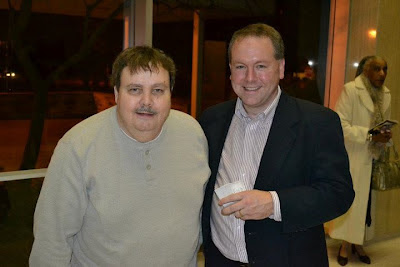 Texas film collector Jim Reid and me, in a snapshot by fellow Texan Bruce Calvert.

Interesting films: Every Kansas Silent Film Festival introduces me to at least a few worthy films that I wasn't familiar with, and this year was no exception. Leatrice Joy in 'The Clinging Vine' (1926), the featured Friday night attraction, was a revelation. What an audience reaction this gender-bender comedy got. And Fritz Lang's 'Spies' (1928), screened Saturday afternoon, was a film I would like to accompany someday as well. On Saturday night, the 1922 'Monte Cristo' featuring John Gilbert wasn't quite the barn-burner I'd hoped for, but still worth watching. 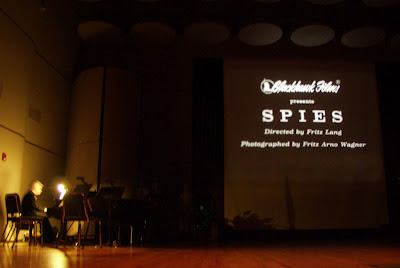 And you haven't really seen silent comedy unless you've seen it with a large audience. This year's program included Chaplin's 'The Cure' (1917) and 'Sugar Daddies' (1927), a pre-team Laurel & Hardy comedy actually starring James Finlayson; both were greeted by gales of rowdy laughter. Seeing the familiar films at the Kansas Silent Film Festival was like seeing them for the first time!

My "coming out" performance: In the "big news for to me" department, this year marked my debut as a feature-length accompanist at the festival. On Saturday morning, I got to sit down at the White Concert Hall's big Steinway and do music for Harry Langdon's great comedy 'Tramp Tramp Tramp' (1926).

What a kick to be on the same program with some talented accompanists! There's Rodney Sauer and the Mont Alto Motion Picture Orchestra. And there's Marvin Faulwell, a theater organ enthusiast who's well known locally and an old hand at bringing silent films to life. And Greg Foreman, a pianist and organist who draws extensively from virtuoso keyboard works to create remarkable live scores. And Phil Figgs, the festival's volunteer coordinator, who also contributes music. 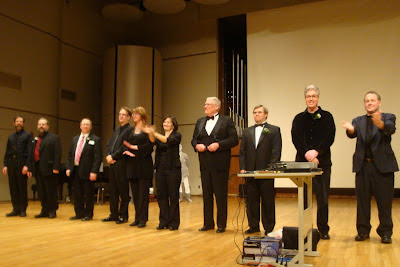 The musicians take a bow at the festival's conclusion. Photo by Melodie Foreman.

I'm not sure where I fit in. (In the above photo, I'm at far right.) For the past few years I've been doing "fill-in" keyboard work at the festival, happy to help with shorts and cartoons. But this year, I was thrilled to be given the chance to work up music for the Langdon film. His comedy seems to lend itself to my approach, and I figured it would be good practice for doing music at Cinefest in Syracuse, N.Y. next month.

So on Saturday, I sat down and off we went! 'Tramp Tramp Tramp' was shown via a good 16mm print, and almost immediately I got into the zone, forgetting about the audience (maybe about 400 folks, pretty good for a Saturday morning) and going with the film. It was just the movie, the keyboard, and me. Less was more: I found that by keeping things simple, I came up with what seemed to be delicate but effective underscoring for some of Langdon's antics. I think things got out of hand a little bit during the climactic cyclone sequence, but otherwise it seemed to work well, with the themes and melodies morphing quite effectively, I thought, as the film progressed.

I'm not often pleased with what I do, especially on solo piano, but this turned out quite well, I thought. I worked with a selection of a half-dozen tunes, including the "title" song, a lilting 6/8 tune for Harry himself, a stronger 4/4 melody (usually in the bass) for Harry's rival, a pompous chord progression for scenes set in a business conference room, and a theme for the romance between Harry and co-star Joan Crawford.

I also made use of an "evil" theme, though this is a picture without much evil in it. I used it only for the "landlord" scene near the beginning and for when some gun-toting deputies nab Harry for stealing a chicken. That's about it for "evil" in 'Tramp Tramp Tramp,' a film that still manages a rousing climax courtesy a cyclone. 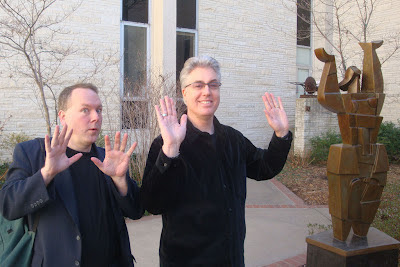 Fellow accompanist Greg Foreman and me outside the hall. Photo by Melodie Foreman.

You don't go hungry: There may not be food allowed in the White Concert Hall, but there's plenty available outside it. In fact, so many breakfasts, brunches, lunches, and dinners are associated with the festival that I joke with Bill Shaffer that it should be renamed the "Kansas Silent Film and Food Festival. Here's me captured by festival volunteer Carol Yoho in a typical scene, about to sample apple pie with "satin freeze" (the local term for soft-serve ice cream) at Bobo's Drive-In on Friday: 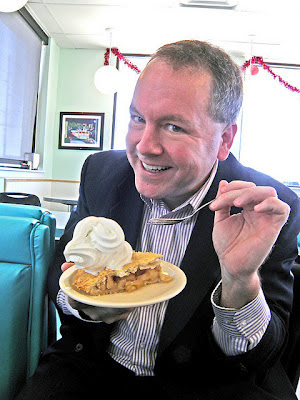 It's personal: Finally, a key reason I keep coming back to Topeka is because The Kansas Silent Film Festival helped reconnect me with silent film. I've had an interest since adolescence, but hadn't been very active for quite some time until I came out to this event for the first time in 2000.

At first, I attended with the idea of writing a book that would draw heavily on the silent film era (and I still plan to), but that gradually morphed into doing music to help bring the films to life and get them in front of modern audiences. I tell my wife I've finally found my artistic niche: "collaborating with dead people." And it was the Kansas Silent Film Festival, and its concentrated dose of great films, music, and people, that pointed me in that direction.

What else can I say? Well, other than the dates are already set for the next Kansas Silent Film Festival. Mark your calendars: Friday, Feb. 22 and Saturday, Feb. 23, 2013, will be here before we know it!

Oh yeah, the carpeting: I'm always mesmerized by the carpeting used in the White Concert Hall. It's an unusual pattern -- kind of like a floral variation on the international biohazard symbol -- that I've never seen elsewhere, and each year I don't really feel like I'm in Topeka until I've seen it once again. 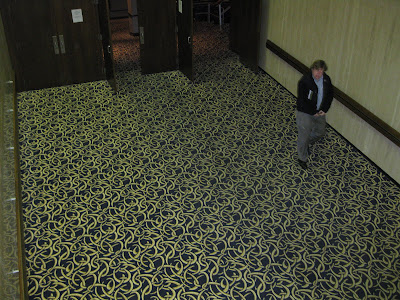 I think it's the coolest carpeting ever. May it never need replacing.