'Trail of '98' on Tuesday, Dec. 4:
Adventure with something for everyone 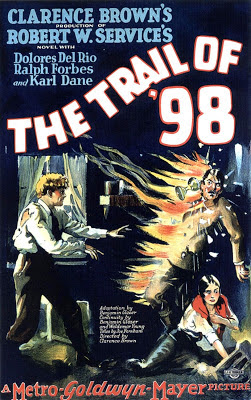 I'm really looking forward to our screening of 'The Trail of '98' (1928), an adventure film directed by Clarence Brown, intended as a blockbuster by MGM, and released at the very end of the silent era.

For one thing, it features a ship named the "Topeka," which reminds me of the Kansas Silent Film Festival, held every February on the campus of Washburn University in Topeka, Kansas. (The next one is Friday and Saturday, Feb. 22 & 23, 2013.)

But more interestingly, I think, is that the film seems to me to be a template for many of the "disaster" movies that Hollywood churned out in the 1970s, most famously by producer Irwin Allen.

The standard method in those pictures was to lay out maybe a half-dozen stories featuring a variety of character types: the headstrong young man, the woman he loves, the ailing child who needs a transplant, the shortcut-taking businessman, the engineer who predicts disaster, the cute elderly couple, and so on.

We get to know them a little, and then BAM! They all get caught in whatever disaster is the real star of the movie. Pick one: an earthquake, a flaming skyscraper, a capsized cruise ship, a plane doomed to crash—even a swarm of bees.

No kidding! There was not only Irwin Allen's big screen epic 'The Swarm' (1978), but a made-for-TV movie from 1974, 'Killer Bees,' that featured one of the last performances of no less than Gloria Swanson. 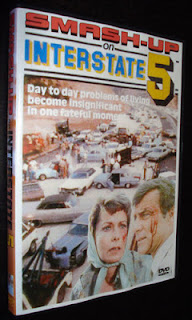 Speaking of made-for-TV, I can boast of one small personal connection to the golden age of 1970s disaster movies. One of the lesser entries was 'Smash-Up on Interstate 5' (1976), a made-for-TV movie based on a novel called 'Expressway.'

I can vaguely recall it being broadcast with much fanfare back when there were just three networks. A quick Internet search finds the cast included the likes of Robert Conrad and Buddy Ebsen. Wow, James T. West and Jed Clampett in the same movie! Well, doggie!

Now fast-forward to the early 1990s. I am employed as a reporter at the Keene (N.H.) Sentinel, and one of my colleagues was a guy named Philip Price. And it turned out that Philip's father was the guy who adapted 'Expressway' into the script for 'Smash-Up on Interstate 5' so long ago.

Wow, brush with fame! I know, but hey, we take what we can up here in glamour-starved New Hampshire.

So what does all this have to do with 'The Trail of '98'? Well, it's a picture about a BIG subject—in this case, the Alaskan Gold Rush of 1898, but also the larger matter of human greed in general.

How to tackle these topics but make a good movie? It seems to me that the film's structure is very much like the formula I remember from the disaster-movie era: take a bunch of people of varying types, get to know them, and then fling them together and put them through some kind of ordeal. In this case, the ordeal is the demanding challenge of getting through the snowbound wilderness of the great North in search of untold riches.

This technique itself seems to be a variant of the formula of exploring a "big" topic by telling stories in various eras, a technique pioneered by D.W. Griffith in 'Intolerance' (1916) and familiar enough to be parodied by Buster Keaton in 'The Three Ages' (1923).

But 'The Trail of '98' seems a lot closer in spirit to, say, 'The Towering Inferno' (1975), so it's interesting from that perspective.

It's also interesting because it's one of those pictures released right when silent film was quickly going the way of the dodo bird. As such, it just didn't get a lot of attention, and never seems to have been taken seriously by scholars, authors, or researchers.

That's a shame, because I think 'The Trail of '98' is an important example of silent-era filmmaking and storytelling at its full maturity. MGM lavished nearly $2 million on the film, and it took director Clarence Brown forever to finish, delaying its release practically to the bitter end of the silent era, which I think obscured its prominence.

Alas, it has no big-name stars (even in cameos) to rescue it from oblivion, although silent era buffs will enjoy such mainstays as Dolores Del Rio and Karl Dane. (It does have a young Lou Costello—long before he teamed with Bud Abbott—credited as Delores Del Rio's stunt double, which must rank as one of the oddest film production credits of any era.)

But the cast is able, if not famous, and the story has something for everyone, so I'm looking forward to seeing how 'The Trail of '98' plays for an audience when we screen it on Tuesday, Dec. 4 at 6 p.m. at the Manchester (N.H.) City Library.

I kinda hope we'll have some snow by then, as it'll add to the atmosphere. But I'd settle for a packed theater, so please put it on your calendar. For more information, I'm tacking on below a recent press release about the screening as well as the library's silent film schedule for the next few months. Hope to see you there! 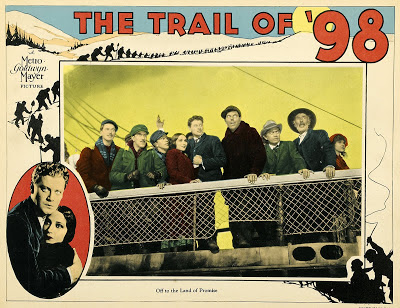 MANCHESTER, N.H.—Comedy, adventure, and romance are all on tap as the Manchester (N.H.) City Library announces its winter/spring series of silent films presented with live music.

The screenings take place in the library's Carpenter Auditorium, 405 Pine St., and are free and open to the public. Music is provided by silent film accompanist Jeff Rapsis, a resident of Bedford, N.H. and one of the nation's leading silent film musicians.

Screenings generally occur once a month, and take place on Tuesdays starting at 6 p.m.

The series aims to recreate the full silent film experience, with restored prints projected on the big screen, live music, and the presence of an audience. All these elements are essential to seeing silent films they way they were intended, Rapsis said.

"If you can put it all together again, many of these films still contain a tremendous amount of excitement," Rapsis said. "By staging these screenings of features from Hollywood's early days, it's possible to see why people first fell in love with the movies."

Live music is a key element of each screening, Rapsis said. Silent films were never shown in silence, but were accompanied by live music made right in each theater. Most films were not released with official scores, so it was up to local musicians to provide the soundtrack, which could vary greatly from theater to theater. 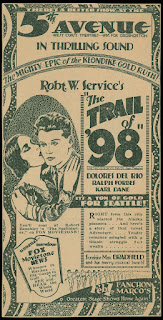 The first film in the winter/spring series will be 'The Trail of '98,' a drama set in the days of the Yukon gold rush, which will be shown on Tuesday, Dec. 4 at 6 p.m. Directed by Clarence Brown and starring Dolores Costello, this 1928 adventure film offers outdoorsy silent drama on a grand scale. Fortune hunters from all over the country rush to the Klondike to seek their fortunes in the gold, and are tested by hardships of the journey.

"This was one of the last great silent epics released before talking pictures took over completely in 1929, and stands as a great example of silent film at the peak of its story-telling power," Rapsis said. "With its multiple unrelated story lines interwoven around one big event, 'The Trail of '98' actually formed a template for Hollywood's later disaster movies such as 'Earthquake' and 'The Towering Inferno.'

Other upcoming features in the Manchester City Library's silent film series include:

• Tuesday, Jan. 15, 2013, 6 p.m.: 'Battling Butler' (1926). Silent film funnyman Buster Keaton's rarely screened boxing comedy gives the star a chance to be even more physical than usual. Rich and pampered Buster reluctantly takes up the Sweet Science to impress his girl, leading to knockout comedy both in and outside the ring.

• Tuesday, March 5, 2013, 6 p.m.: 'Conductor 1492' (1924). In honor of St. Patrick's Day, join obscure comic Johnny Hines in a fast-paced romp about a young lad from the Emerald Isle who comes to "Americky" to make his fortune—but the fun really begins when dear old dad arrives from the Old Sod to help fight his battles.

• Tuesday, May 7, 2013, 6 p.m.: 'The Chaser' (1928). Strange late comedy from Harry Langdon, once considered Chaplin's rival. Carousing Harry is ordered by a judge to swap domestic duties (and clothing!) with his wife. One of Langdon's last feature films and a real curiosity from the final days of silent film.

All screenings are free and open to the public, and take place in the library's historic Carpenter Auditorium, on the lower level of the library, 405 Pine St.

The next installment in the library's silent film series will be 'The Trail of '98' (1928), to be screened with live music by Jeff Rapsis on Tuesday, Dec. 4 at 6 p.m. in the Carpenter Auditorium of the Manchester City Library, 405 Pine St., Manchester, N.H. For more information, call (603) 624-6550. For more information about the music, visit www.jeffrapsis.com.