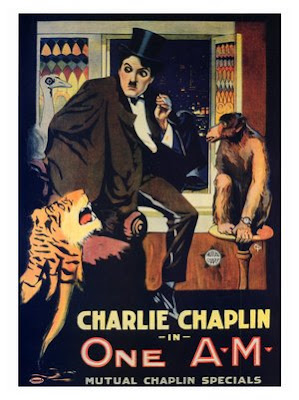 A couple of Chaplin programs coming up this month, so a few thoughts about how his comedies are often the way that folks first get curious about silent film.

That was the case with me. My first exposure to silent film was Chaplin's two-reeler 'One A.M.,' a Mutual comedy from 1916, which was shown in a 7th grade study hall by a music teacher who was also a film buff.

It was a 16mm print from Blackhawk films, and I was entranced. Mr. Salvo, the music teacher, explained that this one was noteworthy because Mr. Chaplin was entirely alone, except for a brief appearance early on by Mr. Albert Austin as a taxi driver.

Even then, something in me was marching to the beat of a different drummer. While my classmates dozed, I couldn't get enough of the antique antics I was seeing. I was especially taken by the idea of Chaplin carrying a movie all by himself.

I had heard of Chaplin (Who knows how exactly? Perhaps watching Lucille Ball imitate him?) of course, and somehow knew he was considered the greatest of the great. But here he was actually doing the stuff that made that reputation. To my 7th grade mind, it was like finding the source to the Nile.

Mr. Salvo (after all these years, I still can't bring myself to refer to him as anything else) brought in other prints from his film collection, and eventually invited a small group of us to his home for screenings -- a very big deal in the days before home video.

He had what seemed to be an immense film collection, as well as a projector set up in a closet. The image was thrown via two mirrors to a large screen mounted on an outside rooftop deck high above the streets of Nashua, N.H. With the canopy of trees, it had a kind of Swiss Family Robinson feel to it.

And that led to the Blackhawk film catalog, and soon I was saving up for Super 8mm prints of Chaplin, Keaton, Laurel & Hardy and more. And that, in turn, led to the library and Walter Kerr's 'The Silent Clowns,' a book so packed with analysis and observation that I am still finding new things in it, all these years later.

So watch out, unsuspecting film-goers! Our upcoming Chaplin programs may hook you in the same way I became hooked back in 7th grade. And I wouldn't be happier.


+ + +
Get your Chaplin fix on Thursday, Nov. 15 at 6:30 p.m. at the Flying Monkey Moviehouse and Performance Center, 39 South Main St., Plymouth, N.H.; (603) 536-2551; http://www.flyingmonkeynh.com/. A collection of comedy short films that trace Chaplin's rise from unknown comedian to the most popular star in all of early cinema. Get ready to laugh, as they don't make 'em like this anymore! Part of a monthly silent film series at a newly restored moviehouse in Plymouth, N.H. Admission, $10 per person.