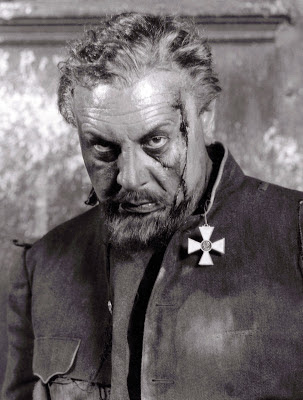 NOTE: Due to continuing recovery efforts following Hurricane Sandy, our screening of 'The Last Command' on Thursday, Nov. 8 at Molloy College in Rockville Center, Long Island has been postponed. I'll update this when we get rescheduling details.

With Halloween over, things quiet down a bit on the silent film music front for the next couple of months. Relatively light duty until we get through the holidays, but still some good gigs coming up.

Of special interest is 'The Last Command' (1928) on Thursday, Nov. 8 at Molloy College in Rockville Center, N.Y. If you're in the area, come by and check it out! (There's more info on the "Upcoming Screenings" page at right.)

One of the great scenes in all silent cinema is in this picture, when Emil Jannings finally goes berserk. (It was enough to get him the "Best Actor" at the first-ever Academy Awards.)

Let's hope the good folks of Molloy College are okay after the recent storm that battered Long Island. For now, let me round up a few thoughts from the recent busy run-up to Halloween, culminating in three films in the past four days.

Because the main character is a concert pianist losing his mind, it's a fun film to do music for. One of the main themes turned out to be a weirdly harmonized version of the melody of an "easy listening" pop tune from the 1960s—one I can't remember the name of but goes "DAH DAH DAH...da-da-da-da-da, da-da-da-da-da: DAH DAH DAH da-da-da-da-da-, da-da-da-da-da. (I know that's not too effective written out in a blog like this.) It turned out to be versatile figure that lent itself to being stripped down to just its rhythm, or even weirder alternate harmonies as the film progressed.

But overall, 'The Hands of Orlac' moves at too slow a pace to cast any kind of a spell. One comment from a regular: "There was nothing you could have done to save that film." So sorry, Robert Wiene and Conrad Veidt! Probably won't be scheduling that one anytime soon again.

• However, 'The Cabinet of Dr. Caligari' (1920) is one of those films that seems to gain a certain energy and presence on the big screen. At our screening in Manchester, N.H. on Tuesday, Oct. 30, it seemed to move right along, and the audience stayed with it the whole way.

Somehow the music fell together, too, with scraps of the "Dies Irae" mixed in with little cells borrowed from Stravinsky's 'Rite of Spring.' It all contributed to a powerful experience. I'd love do the film again, especially as it's one of the most frequently requested of all silent movie titles.

• Our Halloween screening of 'Phantom of the Opera' at Merrimack College in North Andover, Mass. was a hoot. However, for future screenings, I've got to get there earlier to set things up. It's my own fault, but once again I wound up without enough light on the keyboard, so didn't have the flexibility (or accuracy) that I usually have at my disposal. End result is the folks got a slightly-more-atonal-than-intended score, which was okay for a picture like 'Phantom,' but would have been a problem for, say, Rin Tin Tin in 'Clash of the Wolves.' (also 1925).

• And speaking of 'Phantom,' I've just learned of an excellent blog post describing our screening of that film at the Somerville Theatre in Somerville, Mass. on Sunday, Oct. 21. Raquel Stecher writes about classic film on her blog, "From Out of the Past," and she really did a nice job recounting what the Somerville experience was like in this post. Thanks, Raquel!

• Okay, that's about it. Next local screening will be a program of Chaplin short comedies on Thursday, Nov. 15 at the Flying Monkey Moviehouse in Plymouth, N.H. Hope to see you there!