Flying down to Stratford, Conn.
for a screening of 'Wings' (1927) this weekend 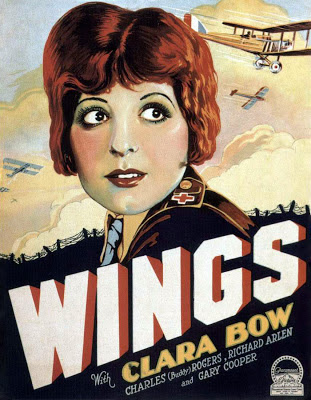 Well, actually driving, not flying. Especially because the last part of my route is on Interstate 95. (That could be more like crawling.)

Destination: the Stratford Theatre in Stratford, Conn., where I'm doing music for a screening of 'Wings' (1927) on Saturday, June 8 to benefit the William A. Barry Scholarship.

I didn't do press materials for this one, but a nice write-up by journalist Joe Meyers appeared last week in a group of weekly papers in the region. It has all the details. Thanks, Joe!

And here's a link to a radio interview I did with a gentleman named Richard Pheneger, who hosts a program called "State of the Arts" on a local station, and also manages the theater. Thanks, Richard!

For anyone in Connecticut new to 'Wings' or silent film in general, welcome to this little corner of the Internet, where I prattle on about my adventures creating live music for silent film screenings around New England and sometimes further afield. (In September, I have the honor of being accompanist at the prestigious annual Buster Keaton Festival out in Iola, Kansas, close to Keaton's birthplace.)

What I do is part show biz and part traveling carnival and part history lecture and part technological geekery, and something I completely enjoy doing for a whole host of reasons. I get to meet nice people, make music, and help bring to life some of the great films that caused people to first fall in love with the movies. (I tell my wife that I've finally found my artistic niche: collaborating with dead people!) Plus, there's a benefit to society, because if this wasn't my creative outlet, I'd probably be spray-painting bridge abutments or something like that.

And in this case, one of the nice people was (and is) Hinda Wolf, whom I met last October at a screening of 'Wings' in Ludlow, Vt. Hinda happened to be in the audience, and enjoyed the experience enough to inquire about me doing something similar at a local theater back home in Stratford. I said of course, and here we are! Let's hear it for total serendipity! But many thanks to Hinda to organizing all the details of this screening and giving me a chance to do my thing in the Nutmeg State.

About 'Wings': the film itself, from the silent era's peak, is one that still makes a strong impact on an audience, and I love doing music for it. Like all the big silent films, it has a little bit (or actually a lot) of everything: drama, adventure, comedy, and an intensity of emotion that's the hallmark of all great silents, I think.

Also, I have a soft spot for this one because my dad was a pilot of the World War II generation, and was 11 years old when this movie hit the screens in his hometown of Nashua, N.H. It was just the right age for him to be swept away by the movie and say, "Wow, that's what I want to do when I grow up!"

Or so I imagine. We lost Dad way back in 1968, when I was just four years old. So there's no way to really know until I someday meet him in heaven, or wherever we go when we're all done here. But something about him seeing 'Wings' at that impressionable pre-teen time feels right to me, and thus I cling to this idea, and it somehow adds a personal layer to this cultural artifact that had such a big impact when it was released.

The film speaks for itself, even if it is silent. But I've found that a few bits of context help today's audiences understand a little about what all the excitement was about.

Remember that in 1927, aviation was brand new. Very few people had even seen an airplane, never mind gone up in one. Back then, a plane flying over a community or (gasp!) landing in someone's field was still big news.

Today, when we think of aviation, what comes to mind are things like crowded airliners and flight delays and endless security lines and baggage fees and lousy food and so on. Air travel has become so familiar (and so unpleasant) that it's lost all the magic that it once had.

Think of it! For eons, mankind dreamt of flying. Now, in just a couple of generations, we've turned it into a mundane experience devoid of wonder. It's now something that must be endured. 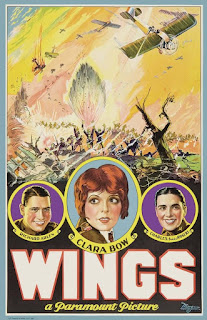 So, to understand how exciting 'Wings' must have been, you have to remember that flight was still brand new, just like the movies. So it must have been amazing to see scenes of mid-air dogfights and scenes shot right from the cockpit of planes swooping and diving over active battlefields. It still is, even to our jaded eyes, but how much more so it must have been to Aunt Matilda in 1927!

And then there's the "World War I" angle. This global conflict (then called 'The Great War' as we weren't expecting another) was the 9/11 of its time. So to its original audiences, 'Wings' had a certain immediacy and urgency that's important to remember. I'm guessing that the feeling must have been close to what we would feel today watching a movie like 'Flight 93,' which dramatized events on one of the hijacked planes.

And then, remember that the motion picture camera could suddenly bring people to places they'd never seen before, and that included the battlefield. For all of human history, the only people who truly knew the horrors of war were those who fought in it. Suddenly, the motion picture could bring anyone (even Aunt Matilda) into the trenches and provide a vivid sense of combat on the front lines—the heroism, yes, but also the wasteful slaughter.

All this was big news to anyone in a movie theater in 1927, and contributed to the immense popularity of 'Wings.'

Even without this context, I've found 'Wings' still holds an audience today, which is a credit to its makers. It does not require the equivalent of the notes that you sometimes need to truly understand something like, say, a play by Shakespeare. (It's coming to that, though: very few of us really know what World War I was about.) However, understanding a little about the era really does help understand a little about why this film was such an event when it was first released, so thanks for bearing with me.