One on, one off, two on:
Not baseball, but silent film music 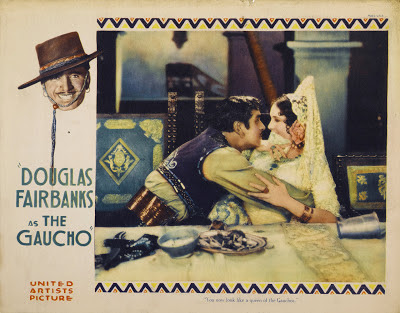 After a bit of a break, another "three shows in three states in four days" series is looming, with all screenings somewhat far from home base. Sometimes I feel like the Red Sox heading out on a road trip.

But each of the three has something that I'm really looking forward to:

• Thursday, June 13 brings 'The Gaucho' (1927) to the Flying Monkey Moviehouse in Plymouth, N.H. Showtime is 6:30 p.m. It's the only big Fairbanks swashbuckler that I've yet to tackle, so getting trying to get into a Latin mood in the next couple of days.

• On Saturday, June 15, it's a program of Chaplin Mutual two-reelers (specifically, the last six) at Brandon Town Hall in Brandon, Vt. The fun starts at 7 p.m. I'm looking forward to this because it's been a request and the audience reaction is always strong at this venue.

That last item on 'The Bond' was interesting enough that I actually just sent out a separate press release to alert the media. We'll see if a World War I propaganda film helps fill the seats.

But first things first: for Thursday's showing of 'The Gaucho' (1927), here's the press release that went out for that. I'm curious to see how it plays with an audience, and you can help that by flying up to the Flying Monkey Moviehouse and being on hand to cheer on Doug's brush with spirituality. Hope to see you there, amigos!

P.S. I notice that reviews for contemporary films are now listing "scenes of smoking" in the roster of things that parents should be cautioned about. Wow! If on-screen smoking in the movies bothers you, don't expect to find 'The Gaucho' very enjoyable. :) 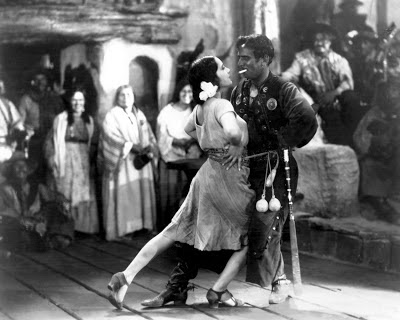 PLYMOUTH, N.H. — He was the Harrison Ford of his time—an action hero who first entertained movie audiences with thrilling on-screen adventures and feats of derring-do.

He was silent screen idol Douglas Fairbanks Sr., whose best work includes 'The The Gaucho' (1927), a timeless adventure film that features a great story, spectacular settings, and memorable performances.

'The Gaucho' will be shown with live music for one screening only on Thursday, June 13 at 6:30 p.m. at the Flying Monkey Moviehouse and Performance Center, 39 South Main St., Plymouth, N.H.

'The Gaucho' opens in dramatic fashion, with a young girl saved by a miracle after falling from a high cliff in the Argentine Andes. She is blessed with healing powers, causing a shrine to be built on the site. A city grows around it, rich with gold from grateful worshipers.

The wealth eventually catches the eye of bandits, including the Gaucho (Fairbanks), charismatic leader of a legendary band of mountain outlaws. The Gaucho, who spurns religion, makes plans to plunder the treasure.

But then the city is overtaken by Ruiz, an evil and sadistic general, who closes the shrine, confiscates the gold, and brings oppression to the pilgrims. The Gaucho, meanwhile, is handed over to the authorities when a love affair goes sour.

Can the Gaucho and his band ride to the rescue? And can the love of a woman help the Gaucho find meaning and inspiration in good deeds as well as the spirituality he once spurned?

Written by Fairbanks and directed by F. Richard Jones, 'The Gaucho' set new standards for visual design in the movies, with action scenes taking place in stylized mountain passes that looked spectacular on screen.

'The Gaucho' also marked a departure for Fairbanks, who until then had played characters with virtue on their side throughout each film. In 'The Gaucho,' however, Fairbanks portrayed a genuine outlaw who, as the story progresses, must grapple with serious moral questions about his life and his beliefs.

'The Gaucho' is "one of the best, most mature and most interesting films in his career," wrote critic Sean Axmaker following a screening at the San Francisco Silent Film Festival in 2009.

Fairbanks took the role in part because as he entered middle age, he needed to broaden and deepen the complexity of the characters he portrayed.

The film is also highlighted by the screen debut of actress Lupe Velez, playing a mountain girl whom the Gaucho romances. Their spats are "amazing, she all tempestuous, hot-blooded, impulsive, a star-struck fan turned jealous sex-kitten, he the smiling bandit king with a playful spirit and a patronizing attitude that tolerates and even appreciates her tantrums," wrote Axmaker.

Rounding out the cast is actress Eve Southern as the Girl of the Shrine.

Live music for 'The Gaucho' will be provided by silent film accompanist Jeff Rapsis, who uses a digital synthesizer to recreate the sound and texture of the full orchestra.

"'The Gaucho' is a wonderful film for music," said Rapsis, who improvises accompaniment using themes or melodies he composes beforehand. "The dramatic settings, especially the scenes in the South American Andes, lend themselves to some evocative scoring to heighten the drama and tension."

'The Gaucho' is appropriate for family audiences, although it includes intense scenes that may frighten very small children. The film is one-and-a-half hours long.

The screening of 'The Gaucho' is part of the Flying Monkey's monthly silent film series, which gives today's audiences a chance to experience the great films of Hollywood's early years as they were intended: in restored prints, in a theater on the big screen, and with live music and an audience.

Upcoming silent films at the Flying Monkey include:

• Wednesday, July 17, 6:30 p.m.: 'The Gold Rush' (1925) starring Charlie Chaplin. Cool off from mid-summer heat with Chaplin's iconic tale of prospectors in the snowbound Klondike. Instead of finding gold, The Little Tramp stumbles upon something much more precious: love. Timeless silent comedy that speaks across the generations.

• Thursday, Aug. 8, 6:30 p.m.: 'Sunrise: A Song of Two Humans' (1927) starring Janet Gaynor, George O'Brien. Director F.W. Murnau's fable about love is widely regarded as one of the most moving and beautifully photographed silent pictures ever made, with innovative camerawork that influenced a generation of directors. Warning: Bring plenty of Kleenex. Winner of an Academy Award for "Unique and Artistic Production" at the first-ever ceremony.

The Flying Monkey runs silent film programs with live music each month. For more information about the music, visit www.jeffrapsis.com.