Showing tonight: Constance Talmadge
in 'The Duchess of Buffalo' (1926) 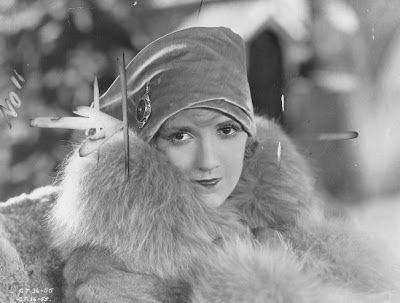 Constance Talmadge all kitted out, and fashionably so, for the Russian winter in 'The Duchess of Buffalo.'

The more I see of Constance Talmadge, the more I like her.

It's not that my opinion was ever low. It's just that most of her films have been unavailable until recent years. And as I've gotten familiar with them, I've discovered an actress with a charm and a flair that comes through quite strongly, even after all these years.

Until the past few years, all I knew of Constance was that she specialized in light romantic comedies, and was the younger sister of the great dramatic actress Norma Talmadge, who tended to overshadow everyone around her. (She was also Buster Keaton's sister-in-law.) But most of Constance's films were lost or just not available for casual viewing.

My acquaintance with Connie began in 2009, when I did music for 'Lessons in Love' (1921), a feature long unavailable but which had recently been restored. The screening, at the now-closed Donnell Library on West 53rd St. in Manhattan, really opened my eyes to an actress whose name I knew, but whose work I didn't. (Many thanks to Joe Yranski of the New York Public Library for bringing me in for this project.)

Then, in 2011, I got a chance to do music for 'Her Sister From Paris' (1925), another Constance Talmadge feature that had been restored and re-released. While I enjoyed 'Lessons in Love,' this one really impressed me: Constance played both a housewife and her nearly identical (but very aristocratic) sister. and you could instantly tell them apart by the slightly different ways she carried herself in either role.

If that wasn't enough, the plot required each to impersonate the other, and Talmadge was able to carry the differing traits through that fun house. Add to this her ability to act "natural" and seem perfectly at home in front of the camera, and I came away with quite a high regard for Connie's talents. (And it didn't hurt that she was quite easy on the eyes.)

And now it's 'The Duchess of Buffalo' (1926), one of Constance's last big pictures and another title that isn't readily available. Some time ago, however, a collector provided me with a digital transfer of a 16mm print of the film. And so tonight (Tuesday, June 4) we get to bring the whole thing back to life during a screening at the Manchester (N.H.) City Library.

Hope to see you there! For more info, here's the press release that went out a little while ago...

MANCHESTER, N.H.—One of Hollywood's most popular actresses of the 1920s returns to the big screen when Constance Talmadge stars in 'The Duchess of Buffalo' (1926). The romantic comedy will be screened on Tuesday, June 4 at 6 p.m. in historic Carpenter Auditorium at Manchester City Library, 405 Pine St. in downtown Manchester, N.H.

Admission is free; donations are encouraged to defray expenses. The program will be accompanied by live music performed by New Hampshire composer Jeff Rapsis.

The picture follows the misadventures of an American dancer (Talmadge) on tour in Imperial Russia, where she falls in love with Vladimir Orloff, a young Army officer (Tullio Carminati). However, the officer's father is the Grand Duke of Russia, and despite being married, he has designs on the girl himself, and refuses to let his son marry her.

'The Duchess of Buffalo' is a prime example of the kind of escapist entertainment that Hollywood was turning out as the silent film era reached its peak in the 1920s: exotic locations, fancy costumes, and a plot filled with equal helpings of romance, adventure, and light comedy.

Actress Constance Talmadge excelled at such roles, and at the time was among the most popular stars in the Hollywood firmament. Her starring role in 'The Duchess of Buffalo' was a high point in her career, so much so that afterwards among family members she often went by the nickname 'Dutch.'

And hers was not just any old family. Talmadge was member of a clan that made up a big part of Hollywood royalty at the time.

Talmadge was sister of Norma Talmadge, a popular dramatic actress in silent films, who was married to Joe Schenck, the powerful producer responsible for Constance's films, including 'The Duchess of Buffalo.' Another Talmadge sister, Natalie, was married to movie comedian Buster Keaton and had appeared as his leading lady in Keaton's 'Our Hospitality' (1923).

Along with her sister Norma, Mary Pickford, and Douglas Fairbanks, Constance Talmadge inaugurated the tradition of placing her footprints in cement outside Grauman's Chinese Theater. She left a trail of five footprints in her slab.

Talmadge retired from the screen in the late 1920s, when Hollywood made the transition to pictures with recorded sound and dialogue. Though still popular, she opted to focus on business investments for the balance of her life. She died in 1973 at age 75.

Jeff Rapsis, a New Hampshire-based silent film musician, said silent movies such as the Constance Talmadge comedies were not made to be shown on television or viewed on home entertainment centers. In reviving them at the Manchester City Library, organizers aim to show silent film as they were meant to be seen—in high quality prints, on a large screen, with live music, and with an audience.

"All those elements are important parts of the silent film experience," said Rapsis, who improvises accompaniment as a film is screened. "Recreate those conditions, and films of early Hollywood leap back to life in ways that can still move audiences today. They all featured great stories with compelling characters and universal appeal, so it's no surprise that they hold up and we still respond to them."

Upcoming silent films at the Manchester City Library include:

• Tuesday, July 9, 6 p.m.: 'Burn 'Em Up Barnes' (1921) starring Johnny Hines. Son of a wealthy auto manufacturer would rather race cars than join the family business, so leaves home to make his own way. After being robbed, he befriends a group of hobos who show him their carefree lifestyle.

• Tuesday, Sept. 10 at 6 p.m.: 'The Tempest' (1928) starring John Barrymore, Camilla Horn. Epic drama in which an officer in the Czar's army (Barrymore) falls hard for a haughty princess (Horn), who spurns him and causes him to be stripped of rank. But the tables are turned with the Russian revolution, which upends the aristocracy and puts the soldier and the princess at the mercy of forces that no one can control.

• Tuesday, Oct. 1 at 6 p.m.: 'The Crackerjack' (1925) starring Johnny Hines. A pickle salesman finds himself in the middle of a South American revolution, impersonating a rebel general and falling for the general's daughter.