In which we set sail this summer
with silent sea-faring epics in Wilton, N.H. 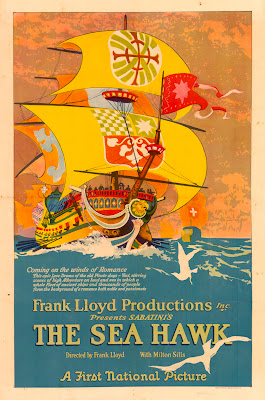 When summer comes in our part of the world, you head to the ocean.

The reason for this is that for three months of the year (from now until about Labor Day), inland New England tries its darndest to become a tropical rain forest, with blazing sun and humid days and monsoon-like rains making it seem more like the Congo. The weeds grow like, well, weeds.

But within ten miles of the coast, a refreshing "sea breeze" keeps things bearable. Hence, our propensity to decamp to the beach. (That, and the excellent fried clams and miniature golf.)

This summer, however, we figured we'd bring the ocean inland, with a series of sea-going silent swashbucklers at the very land-locked Wilton (N.H.) Town Hall Theatre. So, for June, July, and August, you can feel the salty spray in your face without having to fight the crowds at the beach. Just breathe deep into your popcorn, and you'll get the effect.

The thing is, the silent era was awash in ocean-borne stories, and silent film came along at just the right time to capture some of the natural feel for life on the sea as it was lived prior to diesel engines, radio communication, and satellite navigation. That's true for historical epics as well as "contemporary" films, which are now so far in the past that they seem historical as well.

So we're shipping off to sea this summer, and I hope you'll join us. Here's a recent press release for the series. Plase note that we're adding an extra show in August to augment our usual monthly cadence in Wilton. Hey, the ocean is a big place. 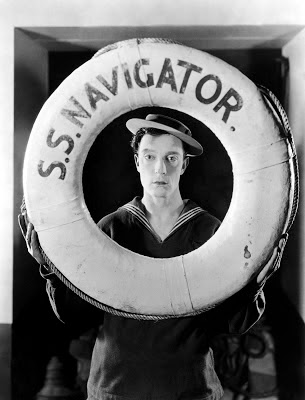 Avast all movie buffs! Gang way for high seas action; ocean-going classics to be screened this summer with live music

WILTON, N.H.—You may not put salt on your popcorn, but you're sure to enjoy all the brine-soaked action on screen this summer as the Wilton Town Hall Theatre launches a series of silent films set on the high seas.

The movies include 'The Yankee Clipper' (1927), an epic drama about the wind-powered sailing ships in the 1840s that raced between China and New England; the original screen adaptation of the historical novel 'The Seahawk' (1924) about a disgraced 16th century English nobleman forced to become a pirate; 'Across to Singapore' (1928), an intense drama of a family of sailors that was almost lost to decomposition; and Buster Keaton's classic ocean-going comedy 'The Navigator' (1924).

All screenings are free and open to the public, with donations encouraged to help defray expenses.

"In warmer weather, many people head to the ocean to cool off," said Jeff Rapsis, who provides musical accompaniment for the Wilton Town Hall Theatre's silent film screenings. "This summer, we figured we'd bring the ocean to our audiences, as we showcase the enduring romance between Hollywood and stories set at sea."

Each of the films offers a different porthole into the rich treasure trove of tales rooted in ocean-going traditions. Each also offers footage of scenes that in some cases are now quite historic, including images of ships and ship-board life that long ago vanished.

• Sunday, June 30, 4:30 p.m.: 'The Yankee Clipper' (1927). Set sail in the era of the great clipper ships in a thrilling race between American and British vessels speeding from China to Boston, with rival crews using only the wind and their wits to win. Produced by Cecil B. DeMille; gorgeous production filmed at sea for six weeks aboard the 1856 wooden square-rigger Indiana. Starring William Boyd (who later played Hopalong Cassidy), Elinor Fair and Frank Junior Coghlan; watch for character actor Walter Long, a native of Milford, N.H.

• Sunday, July 28, 4:30 p.m.: 'The Seahawk' (1924). Swashbuckling historical adventure on the high seas about an English noble sold into slavery who escapes and turns himself into a pirate king. Based on a novel by Rafael Sabatini; later remade into a talkie starring Errol Flynn. The sea battle action sequences in the original silent version were so good, they were reused decades later in the Errol Flynn remake.

• Sunday, Aug. 11, 4:30 p.m.: "Across to Singapore" (1928) starring Ramon Novarro, Joan Crawford, Ernest Torrence. Captain's daughter loves youngest son of seafaring clan, but then the families betroth her to the boy's gruff older brother while he's in home port. When the brothers set sail for Singapore, a gale stirs up the situation into a full-blown crisis.

For each film, Rapsis will improvise a score from original musical material that he creates beforehand, using a digital synthesizer to recreate the sound and texture of a full orchestra.

The three-month sea-faring program is part of a monthly series of silent films presented with live music at the Wilton Town Hall Theatre. The series provides local audiences the chance to experience silent film as it was intended to be shown: on the big screen, in good-looking prints, with live music, and with an audience.

"If you can put pieces back together again, it's surprising how these films snap back to life," Rapsis said. "By showing the films under the right conditions, you can get a sense of why people first fell in love with the movies."

The sea-faring silent film series will launch with a screening of Cecil B. DeMille's 'The Yankee Clipper' (1927) on Sunday, June 30 at 4:30 p.m. at the Wilton Town Hall Theatre, 40 Main St., Wilton, N.H. Admission is free, with donations encouraged to defray expenses. For more information, visit www.wiltontownhalltheatre.com; for more information on the music, visit www.jeffrapsis.com.