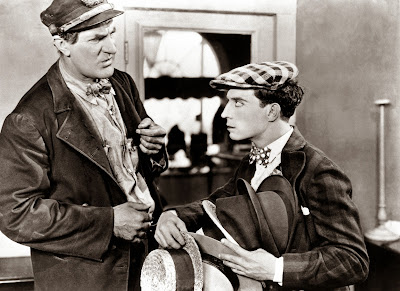 I expected one to be good, but not both!

And yet two different silent film programs, each vastly different from the other, made strong connections with audiences this past weekend.

So before I leap ahead into May and its increasingly busy schedule of screenings, here's a brief report of this past weekend's activities, with some observations.

I call this my "Junior" program, as it's Keaton's 'Sherlock Jr.' (1924) paired with 'Steamboat Bill Jr.' (1928). Silent film programming is a bit like wine selection or meal planning, I imagine, although most of my meal planning experience consists of selecting which drive-thru has the shortest wait.

But which films you choose can really make a difference, and to get it right you have to consider everything from length to content to mood to audience expectations.

With all that in mind, I've found 'Sherlock' and 'Steamboat' to be a really solid match. Both are great films that audiences still respond strongly to. The first is short enough to work well as a warm-up and to introduce Keaton to those unfamiliar with his work. The second has a better developed story and a climax on a much larger scale, so it makes for a nice progression.

And they both offer good examples of how Keaton's early life on stage influenced his work in the cinema. 'Sherlock' is full of live-action illusions (such as Buster jumping through a suitcase and seemingly disappearing) taken from vaudeville, while the cyclone climax of 'Steamboat' includes an eerie episode in theater being destroyed around our hero.

I've done this pairing before, and it always gets a good response. However, the reaction at the College of Saint Mary Magdalen in rural Warner, N.H. was surprising for its sheer intensity. From the opening titles in 'Sherlock,' everything in the film was greeted by raucous, uproarious, and absolutely genuine laughter. 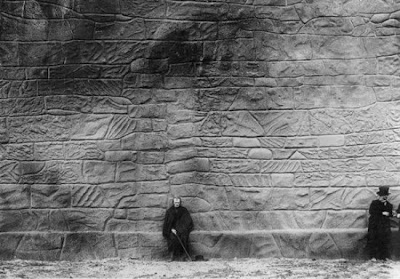 Death, played by Bernhard Goetzke, sits outside his wall in 'Destiny' (1921).

I've wanted to do Lang's 'Destiny' (1921) for a long time, and that time finally came this past weekend with a screening at the Wilton (N.H.) Town Hall Theatre.

I really wasn't sure about this one. In previewing it prior to the screening, the film seemed slow and creaky. The image quality was less than stellar, and the pacing seemed really drawn out. How would a live audience respond to it?

Well, I needn't have worried. On the big screen and in a theater with about 100 people present, the film surprised me by holding the screen. And then it really surprised me by building to a very intense climactic sequence not unlike the end of Lang's later masterpiece 'Metropolis' (1927).

So it unexpectedly became one of those experiences where the film just swept up everyone (including me!) in an experience that I have trouble finding words to describe. A collective emotional catharsis? A unifying narrative apocalypse? A cinematic group hug?

I really don't know how to describe it other than to say it was a real rush to feel the emotional power of the film spreading out from the screen and taking hold of the audience. And somehow the music seemed to fit exactly, pushing emotions over the edge and helping everyone feel this emotional power, almost as one.

For 'Destiny,' I created a melody and chord sequence that to me sounded like one of those "building block" themes of Brahms—not so much a fully formed tune, but material to work with that was so open-ended as to go anywhere. So it was kind of like the main tune of the first movement of the Brahms Symphony No. 1, with dramatic leaps and a harmony that inevitably resolves to the tonic. Fate? Well, if fate has a sound, that's what I was going for.

And it really seems to fit. No matter what mood was called for, my fate music found a way to wrap its melodic tentacles around the on-screen action and embrace it with abandon. (Wow, did I just write that?)

At the end, I was in tears, and so were others in the the audience. And I stood up and took a few bows, but the applause was not just for the film or the music, but for all of us to have come together and shared something that I think brought out our collective humanity. Surprise! We're still human after all, with the capacity to care and love and actually feel something.

Thanks, Mr. Lang, for helping us remind ourselves that we're not dead yet.