Thoughts on 'The Navigator':
Cannibals, racism, and laughter 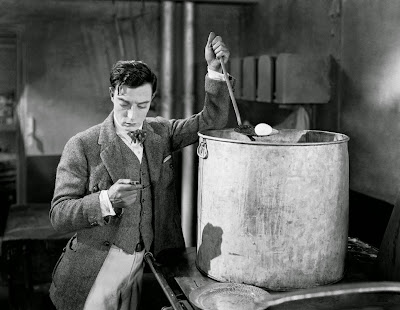 Buster boils an egg in 'The Navigator.'

Something not so funny happened at our screening of Buster Keaton's great comedy 'The Navigator' this past Sunday.

The film reaches a climax when Buster and his lady friend, stranded alone on a drifting ocean liner, run aground on a tropical-looking island.

Through a pair of binoculars, they see the place is not deserted, but swarming with what Keaton somehow immediately identifies as cannibals. "We're safer on the boat," he says.

But the boat is now sinking, leading to further adventures, both on deck and underwater, as Buster matches wits with the primitive island people, who are depicted with all the subtlety of cartoon boogeymen.

Most of this was missed by at least one member of the audience--a woman who was so offended by this unexpected blast of vintage racism that she left the theater and escaped to the lobby.

Wow! I only found out about this afterwards, when she approached me to discuss her reaction. We had a nice chat, actually, about the challenges of presenting films from an era when different ideas about so many things held sway, including race.

Her point was an interesting one: the racism was bad, but what really offended her was that so many people around her didn't seem to be bothered by it at all. (In fact, they were laughing, which is what Buster intended.)

Anyway, she asked that we provide some kind of disclaimer prior to screenings at the Somerville Theatre, where we're doing a monthly series. I didn't object, saying that those of us who are marinated in silent film sometimes lose track of how old-time racism can come across to newbies unprepared for it.

But at the same time, I don't want to go overboard (hey, a pun!) with political correctness. Buster Keaton's films need no apologies from me or anyone. If you can't accept the obvious fact that they're a product of their times, then don't watch. But don't fault others for accepting the movies on their own terms, or actually enjoying them.

It's not like this hasn't come up before. Check out this post about 'The Birth of a Nation,' a veritable powder keg of on-screen racism. But it's a film still worth watching today, a century after its release, in part because it shows how pervasive racism was, and how accepted it was by so many in American society of the time.

And this makes a larger point: as the years pass, films from the silent era can gather layers of meaning and interest that their makers never intended. That's one reason I think people will continue to come back to these movies, even as time marches on. (Another is how they're open to new music, but that's a whole other topic.)

Speaking of cannibals (what a great transition!), a guy who attended Sunday's screening of 'The Navigator' uncovered something in the movie that I'd never heard before.

After the show, I got this e-mail from Vincent Recca:


My son and I spoke with you briefly after the screening of 'The Navigator' and I overheard someone ask if the cannibal chief was played by the same actor as the chief in 'King Kong'. In reading up on 'The Navigator' today, I happened across the answer:

It seems possible that Rollo's fight with the invading cannibals inspired a memorable scene in Walt Disney's '20,000 Leagues Under the Sea.' Some of Keaton's films use racial stereotypes in gags that aren't malicious yet haven't aged well. In 'The Navigator,' Keaton presents an entire black tribe without resorting to 'darkie' humor. The cannibal king is played by Noble Johnson, a noted friend and associate of both Keaton and Lon Chaney. A decade later Johnson portrayed the imposing native chief in 'King Kong.'

So the tribe leader in 'The Navigator' was the same guy who played the head chief in 'King Kong.' And I always thought if you've seen one cannibal, you've seen them all.

Oops! There I go again!