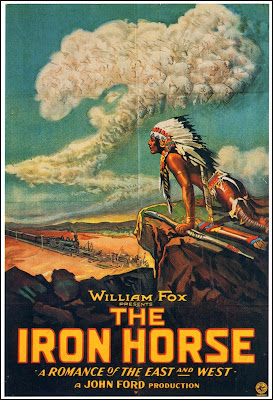 Directed by a young John Ford, the film depicts the building of the transcontinental railroad in the 1860s. It's notable for many reasons, not the least of which is its amazing location photography.

Because most Americans today do not use railroads for travel, a film such as the 'Iron Horse' is unlikely to connect with contemporary audiences the same way it would have at the time of its original release. In the 1920s, everyone travelled by train.

So how to make up for that? In introducing the film, I plan to point out that a good way to look at 'The Iron Horse' is that when it was released, the completion of the transcontinental railroad was only about a half-century in the past, or within memory of a lot of people still around.

Here was this amazing era-defining accomplishment that helped shape so much of American life and society, and yet there were people around who had been born before it had been created.

How can we relate to this today? Well, today the function of our passenger rail network has largely been taken over by the Interstate Highway System. And isn't it convenient that the Interstate system was created in 1956, which is almost precisely as far in our rear-view mirror as the transcontinental railroad was in the 1920s?

So to understand the impact of 'The Iron Horse' on its original audiences, you need to not only remember how new movies were, but you also have to allow for how prevalent railroads were in everyone's lives back then. And to do that, you might try imagining a film celebrating the heroic construction of...(drum roll, please)...the Interstate Highway System! 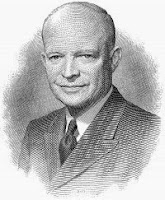 And this raises the question: Who's going to play Dwight D. Eisenhower?

One more thought about 'The Iron Horse.' Silent films being a niche activity, I'm willing to consider any avenue to get an audience. So for this train-related picture, I posted a notice on a local railfan bulletin board. You'll find it listed someone down the roster of topics. As of now, the post has had 183 views.

I don't know if this will get any attendees from the world of "foamers." (That's the term for railfans used by actual railroad employees, and refers to the tendency to foam at the mouth in the presence of a train.) But I was amused by the registration process to post on the board, which required you to prove your expertise.

How? In order to gain access to the railfan bulletin board, you needed to know the train-related character who was once used to promote the popular "Good & Plenty" candy!

I knew it, hence my ability to post. Do you?

I'll give the answer at tonight's screening, so there's another incentive to make the trek. In the meantime, for more info, here's the text of the press release. Hope to see you there! 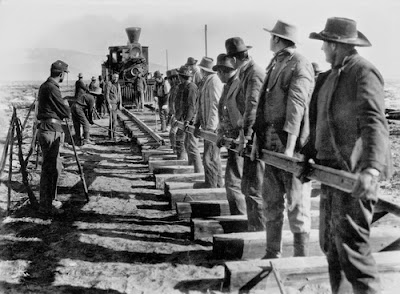 John Ford's 'The Iron Horse’ to be screened with live music on Friday, June 13 at Concord's Red River Theatres

CONCORD, N.H.—The battle to complete the transcontinental railroad provides the setting for 'The Iron Horse,' a John Ford-directed silent film epic that mixes history and fiction.

Shot in the wide open spaces of New Mexico, Arizona, and Nevada, 'The Iron Horse' set new standards for location photography and was a huge hit for Fox Studios when released in 1924.

Though based on actual historical events, 'The Iron Horse' weaves fictional story lines into the massive effort to build a railroad across the West, linking California with the rest of the nation.

The project, authorized by President Abraham Lincoln in 1862 at the height of the Civil War, was not completed until 1869 with the driving of the Golden Spike in Utah.

Although only a half-century in the past when 'The Iron Horse' was made, the completion of the transcontinental railroad had already taken on a mythic status as part of the nation's story.

Director John Ford was just 31, but already a veteran of 35 features and dozens more two-reelers, many of them westerns, when he lobbied William Fox to helm 'The Iron Horse.' 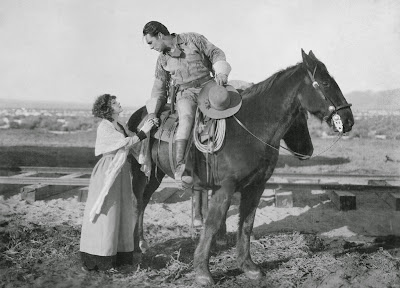 George O'Brien and Madge Bellamy in 'The Iron Horse.' O'Brien is the one in the saddle.

For the leading role of Davy Brandon, Ford cast an unknown. George O'Brien had been a stuntman, extra, and camera assistant when Ford, impressed by his screen tests and his pluck, cast him over the studio's reservations.

'The Iron Horse' made O'Brien a western star and his subsequent career included many more Ford films as well as the lead in F.W. Murnau's masterpiece 'Sunrise' (1927).

The female lead was played by Madge Bellamy, a major leading actress of the silent film era.

Taking advantage of the movie camera's flexibility, Ford and his crew shot the film on location in New Mexico, Nevada, and Arizona. Locations were chosen for wide open spaces and dramatic landscapes.

The production battled snow constantly, and the shooting day often began with the entire company shoveling and sweeping the snow off the streets of the sets.

To add authenticity, Ford brought in real Native Americans to play the "Indians" (they also doubled as Chinese laborers for a few shots) and hired local cowboys for the riding scenes and stunts.

The film opened to rave reviews and became one of Fox's biggest hits of the silent era, earning over $2 million on a negative cost of $250,000.

John Ford's first American epic is about the nation's physical and symbolic unification in the wake of the Civil War. It is, in many ways, the birth of Ford's essential themes: the meeting of cultures (the Irish, the Italian, and in a rather token way, the Chinese laborers of the West Coast), the sprouting of civilization (at least as defined by the American settlers) in the wilderness, and the building of a community in a shared purpose.

The frontier towns that spring up like desert weeds and pull up roots to follow the construction crews are pockets of both wild anarchy and native justice, and Ford's location shooting set the human drama against the magnificent Western landscapes.

The screening at Red River is a chance to experience 'The Iron Horse' as it was intended to be seen: in a high quality print on the big screen, with live music and with an audience.

'The Iron Horse' will be screened with live music performed by silent film accompanist Jeff Rapsis.

Rapsis, who uses original themes to improvise silent film scores, said silent film dramas such as 'The Iron Horse' focused on big and universal human emotions such as Love, Despair, Anger, and Joy.

Because of this, audiences continue to respond to them today, especially if they're presented as intended — with a live audience and live music.

"Dramas such as 'The Iron Horse' were created to be shown on the big screen as a communal experience," Rapsis said. "With an audience and live music, they can give audiences today a sense of why people first fell in love with the movies."

• Friday, Aug. 15 at 7 p.m.: 'The Last Command' (1928). Emil Jannings snagged the first-ever Best Actor Academy Award for his towering portrayal of a Czarist general and patriot forced to contend with the Russian Revolution in this sweeping late silent drama directed by Josef von Sternberg. One of early Hollywood's most creative and challenging looks at World War I.

• Friday, Oct. 24 at 7 p.m.: 'Nosferatu' (1922). Celebrate Halloween by experiencing the original silent film adaptation of Bram Stoker's famous 'Dracula' story. Still scary after all these years—in fact, some critics believe this version is not only the best ever done, but has actually become creepier with the passage of time.