Reasons you should see 'The Navigator'
on Sunday, June 8 at the Someville Theater 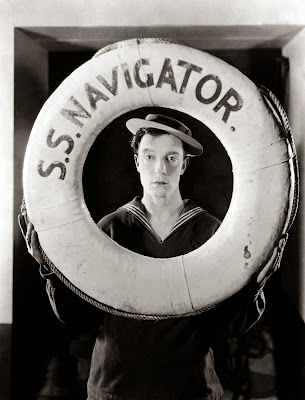 Starting with zero, we count the reasons to see 'The Navigator.'

Okay, 10 reasons to see Buster Keaton's 'The Navigator' (1924) on Sunday, June 8 at the Somerville Theatre in Davis Square, Somerville, Mass.

1. Showtime is at 2 p.m., which means you have the whole morning for church, and you'll still be out in time to enjoy the remainder of Sunday afternoon and evening.

2. It's being shown in 35mm, the native format for silent film. With the recent conversion to digital formats, it's not going to be easy to see any film in 35mm in the years to come. Silent film will be especially hard to come by in 35mm: not just the prints, but the knowledge and skill and equipment needed to project it properly in a large theater. All of this you get with the Somerville's show. 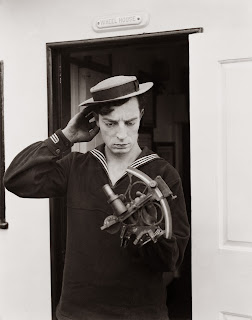 3. It's a great example of 'found' comedy. Buster and his crew started with getting use of the ocean liner first, almost by accident, and went from there. They created a story (and all the gags with it) around the ship, so 'The Navigator' has a wonderfully organic feel to it. Sequence after sequence comes clearly from what Buster and his team found on board The Buford.

4. Speaking of The Buford: the ship used in 'The Navigator' is an interesting piece of history all by itself. Prior to becoming Keaton's biggest prop, it was used by the U.S. Department of Justice and Department of Labor to deport 249 non-citizens (including activist Emma Goldman) to Russia from the United States because of their alleged anarchist or syndicalist political beliefs.

5. 'The Navigator' contains some underwater sequences that are, well, groundbreaking. To get them, Keaton went up to Lake Tahoe, where the water is clear but freezing cold, and shot footage around a mock-up of the ship's exterior. It's clearly Keaton in the bulky diving suit, and his ability to get laughs while even under the most rigorous and demanding physical conditions is really something to see.

6. The program includes two rarely seen Keaton short comedies, both in 35mm. One is 'Convict 13,' which takes Buster from the golf course to a grim prison camp; the other is 'The Electric House,' in which Keaton gets to indulge in his passion for gadgetry. Both are full of Keaton's unique brand of physical comedy and are great warm-ups for 'The Navigator.'

7. The musical accompaniment is live and made up right there on the spot. I sometimes neglect to play up this angle because the main focus should be on the film, which the music should support. But the improv element really does add a certain freshness and immediacy to a silent film screening that makes it different from other movie-going experiences. 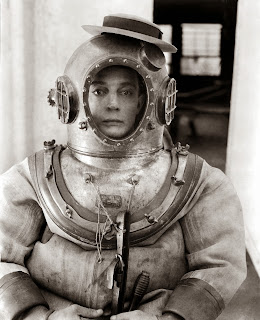 8. You just have to see Buster in his old-school deep-sea diving gear.

9. The Somerville Theatre sells beer and liquor. The fine print: "You must have a valid Massachusetts I.D. or U.S. Passport in order to purchase beer or wine."

10. 'The Navigator' is funny. Really. But it's only really as funny as it ought to be when seen on the big screen, and with live music, and with a live audience, as it was intended to be shown. See for yourself by joining us on Sunday, June 8 for this screening at the Somerville Theatre.

If you'd like more info, the press release is below. Hope to see you at 'The Navigator,' and at all the upcoming films that make up the Somerville Theatre's 'Silents, Please!' series. 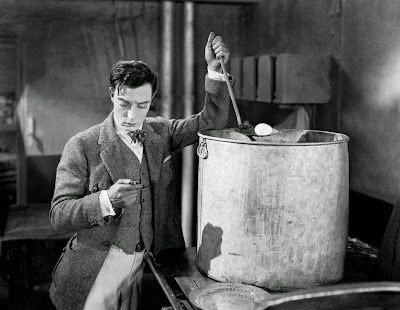 SOMERVILLE, Mass.—He never smiled on camera, earning him the nickname of "the Great Stone Face." But Buster Keaton's comedies rocked Hollywood's silent era with laughter throughout the 1920s. Acclaimed for their originality and clever visual gags, and also admired for their authentic location shots and amazing stunts, Keaton's films remain popular crowd-pleasers today.

See for yourself with a screening of 'The Navigator' (1924), one of Keaton's landmark feature films, at the historic Somerville Theatre on Sunday, June 8 at 2 p.m. The program, which launches a monthly series at the Somerville dubbed 'Silents Please,' will be accompanied by live music performed by Jeff Rapsis. Admission is $15 per person, $12 students/seniors.

The Somerville Theatre, which recently celebrated its 100th anniversary, continues to screen revival films in their native 35mm format whenever possible.

'The Navigator' follows the adventures of wealthy nitwit Rollo Treadway (Keaton) and his pampered girlfriend, who find themselves adrift alone on a massive ocean liner. Forced to fend for themselves without servants, the pair attempt to cope with day-to-day life, creating classic comedy in the process.

Filmed at sea on a real ocean liner that Keaton turned into the largest prop in comedy history, 'The Navigator' has been hailed as one of the most original and distinctive movies to come out of silent film's golden era of comedy. The film was highlighted by underwater scenes, with Keaton in an oversized antique diving suit, that were revolutionary at the time.

The program also includes two of Keaton's short comedies, both from 35mm prints: 'Convict 13' and 'The Electric House.'

In reviving 'The Navigator,' the Somerville Theatre aims to show silent film as it was meant to be seen—in high quality prints, on a large screen, with live music, and with an audience.

"All those elements are important parts of the silent film experience," said Rapsis. "Recreate those conditions, and classics of early Hollywood such as 'The Navigator' leap back to life in ways that audiences still find hugely entertaining."

"What I do is something of a high wire act—kind of like 'Who's Line Is It Anyway' for film scoring," Rapsis said. "But it definitely creates a one-of-a-kind spontaneity that reflects the energy of the film as well as the audience's reaction to it." 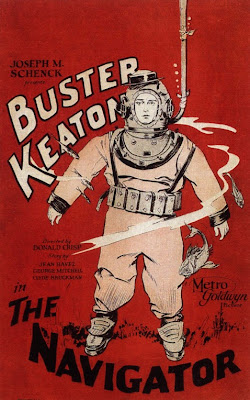 'The Navigator' marks the restart of the Somerville's monthly program of screening silent films in 35mm with live music. Dubbed 'Silents, Please!', the series aims to help audiences understand why people first fell in love with the movies.

"It's a real pleasure to put these pictures on the big screen so that they can be seen as intended," said Ian Judge, the Somerville's manager. "People who've never experienced silent film like this are surpised at how well they work when you put all the elements back together."

Following 'The Navigator' (1924) on Sunday, June 8 at 2 p.m., the Somerville has scheduled the following silent films to be shown in 35mm in the venue's main theater. All will be screened with live music by Jeff Rapsis.

• Sunday, July 13, 2 p.m.: 'Orphans of the Storm' (1921) starring Lillian and Dorothy Gish. Pay tribute to Bastille Day with D.W. Griffith's silent blockbuster set during the French Revolution. The story: Country girl Lillian Gish accompanies her blind sister Dorothy to Paris for an operation to restore her sight. Separated and then swept up in events beyond their control, they each must fight to survive amidst chaos that threatens to destroy the nation.

• Sunday, Aug. 10, 2 p.m.: 'Chaplin Short Comedies' starring Charlie Chaplin. Program includes 'A Dog's Life' (1918), 'Shoulder Arms' (1918), and others. Spend an afternoon with the Little Tramp on the 100th anniversary of his first screen appearances. The whole family will enjoy restored prints of some of Chaplin's most popular comedies.

• Sunday, Oct. 5, 2 p.m.: 'The Crowd' (1928). Director King Vidor's intense drama about the life of an everyman who aims high, but life has other ideas. Released by MGM near the end of the silent era, and filled with iconic scenes showing the eloquence of silent film at its most fluent.

'The Navigator' (1924) starring Buster Keaton will be screened in 35mm with live music on Sunday, June 8 at 2 p.m. at the Somerville Theater, 55 Davis Square, Somerville, Mass. Admission is $15 adults, $12 students/seniors; general admission seating. For more information, call (617) 625-5700 or visit http://www.somervilletheatreonline.com.

Critic comments on 'The Navigator':

"The Navigator looks and feels like it could be one of today's summer mega-blockbusters. It has a great, simple premise that includes the destroying of a huge set. It's endlessly imaginative, funny, inventive, etc. It's one of the greatest movies I have ever seen."
—Jeffrey Anderson, Combustible Celluloid, 2001

"His comic timing is brilliant. He says more in his face than most actors today do with their face and voices. It's a very funny story with dozens of very memorable comic scenes. A true classic."
—James Higgins, Turner Classic Movies, 2011