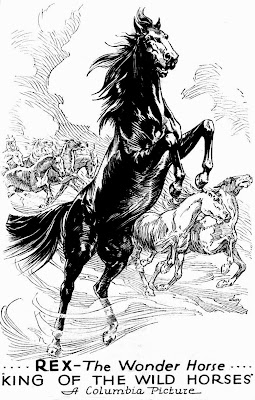 Any show involving animals is bound to contain surprises. And our 'Rex the Wonder Horse' double feature will be no exception.

No indeed—we have time for a few extra added attractions, as both features are pretty compact. So there's room for a few cinematic treats that I hope audiences will find worthwhile.

Speaking of audiences: our part of the world (New England) has been in the grip of a stretch of absolutely beautiful weather: day after day of sunny skies, warm air, and low humidity. It's like California without—well, California!

And from the forecast, it looks as if this great run will continue at least through the weekend.

Ordinarily, beautiful weather would cut into attendance. But around here, the weather has been just so gosh-darned nice that by showtime next Sunday, people might be coming down with the opposite of cabin fever.

I don't know if such a condition exists. But if it does, I would be the first to prescribe an afternoon in a darkened theater as just the place to recuperate from this overdose of terrific weather.

If you'd like more info about the show, Rex the Wonder Horse, or this summer's "All-Star Animal Summer Silent Film Extravaganza," the text of the press release is pasted in below. 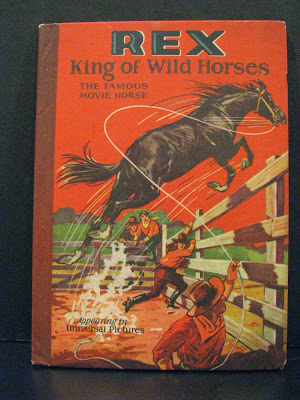 Rex the Wonder Horse and master of multiple media platforms, too.

WILTON, N.H. — Rex the Wonder Horse gallops across the silver screen once again in the next installment of the Wilton Town Hall Theatre's summer series of films starring animals.

On Sunday, June 29 at 4:30 p.m., the amazing horse appears in two action-packed equine adventures. In 'Wild Beauty' (1927), Rex plays an untamed horse used by the villains (humans, of course) to foil a high-stakes derby, with unexpected results. In 'The Devil Horse' (1926), Rex aids pioneers on the Great Plains in battling a fierce tribe of Native Americans.

The double feature is free and open to the public. A donation of $5 per person is suggested to help defray costs.

Dubbed "The All-Star Animal Summer Silent Film Extravaganza," the series runs through August and encompasses a total of 13 silent feature films with animals of all types in the lead roles.

Live music for the screenings will be performed by Jeff Rapsis of Bedford, N.H., one of the nation's leading silent film accompanists.

His trainer was Jack "Swede" Lindell, who found him in a boys' school in Golden, Colo. He discovered that Rex had the unusual behavior of trying to bite a whip when it was cracked. Lindell encouraged this and would often stand behind the camera to get a dramatic shot on film. Lindell never left Rex alone on set unless he was locked in his own trailer.

Besides well-known stars such as Rex the Wonder Horse, the series will include the work of more obscure performers such as Thunder the Dog, Strongheart (another German Shepherd), and the only surviving film featuring pachyderm Oscar the Elephant. Other pictures feature monkeys, lions, and even dinosaurs.

"At their heart, these pictures capitalized on people's love of animals to produce great entertainment," Markaverich said. "They still work, and really do come to life when shown in a theater with live music and an audience. Also, because of the passage of time, they're perhaps even more interesting today than they were when first released."

The series runs now through August. Upcoming programs include:

The "All-Star Animal Summer Silent Film Extravaganza" continues with a double feature of movies featuring equine superstar Rex the Wonder Horse on Sunday, June 29 at 4:30 p.m at the Wilton Town Hall Theatre, 40 Main St., Wilton, N.H. Admission is free, with a donation of $5 per person suggested to help defray expenses.