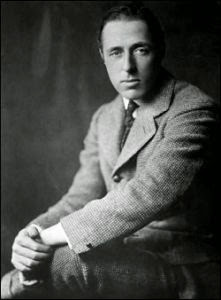 Today's sermon is on director D.W. Griffith. But first, a funny story involving me and law enforcement—no, not the Keystone Kops!

So I'm heading up Interstate 89 on Saturday afternoon, on my way to accompany the monthly silent film program in Brandon, Vt., when I notice I'm running low on gas.

No problem, I think. A few miles ahead is Exit 13, where there's not much, but there is an Irving gas station. So I can fill up there.

Except as I get near the exit, a clot of slow-moving vehicles is blocking both lanes. When the passing lane finally opens up, I figure I have time to get back, so I make my move.

And just as I accelerate, we enter a down-grade, and wouldn't you know, a state trooper is right there, running radar. Cripes! And as I pass by, I see his lights go on, and I figure I'm done for.

Oh, well. I'm on the road a lot, so I figure I'm bound to get stopped once in awhile. I pull back in the right lane and resume 65mph, looking in my rear view mirror to see the cop come around the bend behind me with blue lights flashing.

And then there's Exit 13, which I was planning to take. So I do. Down I go, stopping at the stop sign, and then drive down the road to the Irving Station, which is in plain view of the highway.

I get as far as starting to fill my tank when I see a green state police cruiser go flying up the highway in the direction I was traveling. (No lights on, though.) Was he looking for me? And was I in trouble for evading an officer of the law?

I didn't really want to find out. So after filling up, I went into the store, which turns out is not a convenience store but a pretty substantial local grocery store, complete with deli counter.

Worth checking out, I thought, especially if I'm on the lam. Thus did I spend more time than usual inspecting the produce before finally deciding on a package of sunflower seeds.

And when I got back on the highway, no trooper in sight. Was he not after me after all? Either way, as I felt the feeling of having escaped take hold, I was reminded of something I once heard attributed to Winston Churchill: "There is nothing as exhilarating as getting shot at and missed."

Saturday's screening was a real rush, as they always are in Brandon. Strong response for a Keaton program featuring 'The Navigator' (1924); attendance of more than 100 people, the best so far this season.

This was followed on Sunday by a matinee screening of D.W. Griffith's 'Orphans of the Storm' (1921) in 35mm at the Somerville Theatre in Somerville, Mass.

Earlier this year, a Sunday screening in Somerville competed with the Super Bowl. This time around, it was the World Cup. Hence my opening remarks to our audience of about 70 people, which was larger than I expected:

"Coming in here, I heard on the radio that this afternoon's World Cup Final between Germany and Argentina would be watched by more than 1 billion people. And then there's you folks..."

The print was missing the very opening scene (where Henrietta's father gets stabbed) and it seemed to run a tad rapidly at 24fps, which made some of the dramatic scenes seem comically rushed in that way that reinforces unfortunate stereotypes of silent film.

But still, the power of Griffith to command an audience's attention once again trumped any concerns.

And perhaps here is the place to at least outline an aspect of Griffith's genius that I think has been completely overlooked as the years have passed.

Here's the thing: for more than 20 years prior to working in motion pictures, Griffith was a man of the theater. More specifically, he was a man of the small-town theater, directing touring companies in melodramas that toured small town theaters in one-night stands.

As you might imagine, to do this successfully, you HAD to hook an audience early and give it what it wanted. If you didn't, there would be real consequences. They'd throw things, or possibly run you out of town on a rail.

So Griffith developed in his bones a keen sense of what it took to mesmerize an audience. And he carried this into the then-new art of motion pictures, where such knowledge was just as crucial.

Think of it. If the people making pictures (such as Griffith) did not know how to tell a story and hold an audience, motion pictures might never have developed the massive and quick following they did.

In presenting silent films to live audiences, I've seen this happen again and again. A Griffith film such as 'Way Down East' (1920) that seems creaky and old and dull when viewed alone is utterly transformed by the presence of an audience to react to it, and to itself.

It somehow magnifies everything, making the presence of an audience a crucial part of the cinema experience, and a key reason (I think) why people really did fall fast and hard for the movies.

Griffith understood how this worked, and he baked this knowledge (a combination of mob psychology and crowd control) into most of his big pictures, guided at the time probably just by his own instincts of showmanship and sense of what would work.

At the same time, however, he was just creative and open-minded enough to recognize that motion pictures help new possibilities for narrative and story-telling that went beyond what could be done on stage. And so he was among the first to employ innovations such as split-screens, rapid editing, shots of differing distances, and so on.

Griffith has always gotten a lot of credit for such innovations. But none of it would have mattered if he hadn't been rooted in the melodrama stage tradition all along, creating stories that audiences simply were powerless to resist.

So in the way Griffith brought the crucial and vital elements of the theater into the world of motion pictures, but then also made use of new tools in a new art form, he stands as a hugely important and pioneering figure in cinema.

To me, Griffith occupies a similar position to that of Beethoven in music. Beethoven grew up in the disciplined Classical tradition of Mozart and Haydn, but then pushed the idiom and language to a whole new level that made possible the era of Romanticism that was to follow.

Of course in due time, Griffith's rather old-fashioned style (and Victorian morality) was superceded by new directors in the 1920s, many of whom pushed the possibilities of cinema much further, and many of whom were not hamstrung by the kind of deep traditional stage background that Griffith had.

But still, would they have been able to do what they did if Griffith hadn't shown the power of the medium to hold an audience in the first place?

No one can say for sure, but I think it's safe to say that Griffith was the right man at the right time to get the movies jumpstarted from nickelodeon to the art form of the 20th century.

And it was not just because he pioneered many of the techniques that would become the language of cinema. It's also because he knew how to keep an audience on the edge of its seats, and that aspect of his craft should be neither underrated nor forgotten.

The best proof of this? Just run a D.W. Griffith film the way it was intended: with live music and in front of an audience, the larger the better. As long as people still gather in one place to watch a movie together, they still work. And they probably always will.