A few notes from the road...

Okay, so I hand my passport to the TSA agent at Manchester (N.H.) Airport, and she says, "Are you performing somewhere?"

Performing? Turns out she recognizes me as the guy who "does all the silent films."

Wow, recognized at the airport! That's the closest I'll ever get to feeling like a rock star.

We'll, the truth is, I'm not performing, but heading off to attend my wife's family reunion in Switzerland. (If I do any performing there, it'll only be because I've had too much beer and there's a tuba lying around.)

I'll be back to doing music for silent film soon enough, though, and will resume reports prior to what promises to be a busy August.

For now, let me see if I can post a picture of the hiking boots I'm wearing using my trusty old BlackBerry. Here goes! 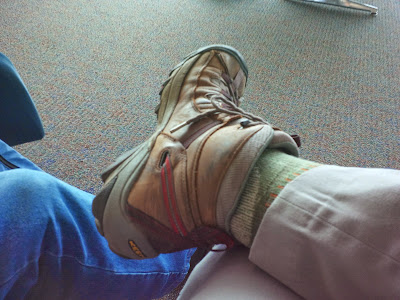