Why theaters should coordinate schedules,
and thoughts on why live music is important 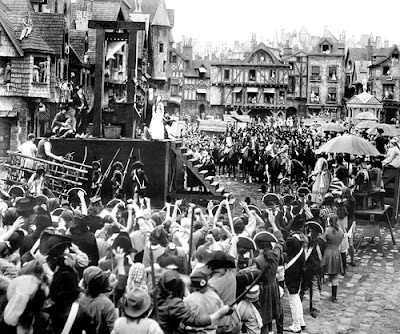 See 'Orphans of the Storm' (1921), D.W. Griffith's sweeping drama set during the French Revolution, in 35mm on Sunday, July 13 at 2 p.m. at the Somerville Theatre, Davis Square, Somerville, Mass.

Okay, I have something about silent films and theater schedules and live music to get off my chest. But first, an update on the latest.

This evening I head up to the Flying Monkey Moviehouse in Plymouth N.H. to do music for a screening of Keaton's 'The General' (1926) at 6:30 p.m., and then get to catch my breath prior to weekend shows way up in Vermont and way down in Boston.

Last night we had a surprisingly intense screening of 'The Scarlet Letter' (1926) directed by Victor Seastrom and starring Lillian Gish. A much-bigger-turnout than expected contributed to the excitement, I suppose, but the film itself really came across.

Alas, it only exists in a version that's half camera-negative (which looks beautiful) and half blurry 16mm print-down, which is a shame, because the film has such visual power throughout. Let's hope the missing material turns up in pristine form someday.

For now, 'The Scarlet Letter' is a vivid demonstration of how different a film can be when it's too many generations away from the original.

In the sections of 'The Scarlet Letter' take from the 16mm print, there's almost no detail visible on faces, and so the acting just doesn't register. It's more like a dance of puppets. But in the pristine sections, the performances of Gish and her co-stars all instantly leap to life.

With the original material of so many films gone forever, it's important to remember this distinction when watching any movies from the early days of cinema. Good or bad, they all looked great. Otherwise, people would not have fallen in love with them. Right?

Looking ahead, it's the screening of 'Orphans of the Storm' on Sunday, July 13 that I'm most interested in promoting. And one reason for that is because another Boston-area theater has decided to schedule a big silent film program on exactly the same day and at exactly the same time as our long-planned event.

Yes, I'm glad that Boston is a big enough city to support such robust silent film programming. However, the audience for this art form is limited. And by forcing people to choose one screening over another, neither screening will get the total attendance it should have.

So what? Well, this robs the films of their respective impacts, which depend on a critical mass of viewers. But it also perpetuates the idea that few people are willing to attend or support such programs. After all, look at all the empty seats!

So, in an age of instant downloads and audiences of one, can't theaters trying to keep the cinema experience alive at least coordinate their offerings?

And a sad side note to this situation is that the other theater is using recorded sound rather than live music to accompany their silent program. I know it sounds self-serving to point this out, but live music is truly essential to the silent film experience, and it's disappointing to see that some knowledgeable theater operators just don't understand that.

I must say the people who restore and reissue certain silent titles are contributing to the problem. By distributing DCP versions of great classics with convenient recorded scores, and touting them as a whole package and how great the score is, they encourage theater operators to take the easy way out and dispense with live musicians.

Again, I know it sounds self-serving. But film restoration people and theater operators alike ought to understand the intrinsic value of using live music for a silent film rather than a recorded score.

You wouldn't watch a play where the actors all lip synched their lines to a pre-recorded dialogue track, would you? So for silent film, you shouldn't expect a recorded track to function as a substitute of equal value to live music. It's not.

I'm deliberately not mentioning the other theater, not out of cowardice, but out of respect. Plus I'd rather just promote our screening anyway, and you don't do that by mentioning other options. :)

Okay, off my soapbox. So, with a bit more feeling than usual, I urge you to see 'Orphans of the Storm' (1921), D.W. Griffith's French Revolution epic, in 35mm and with live music on Sunday, July 13 at 2 p.m. at the Somerville Theatre in Davis Square, Somerville, Mass.

If you'd like more info, here's the press release: 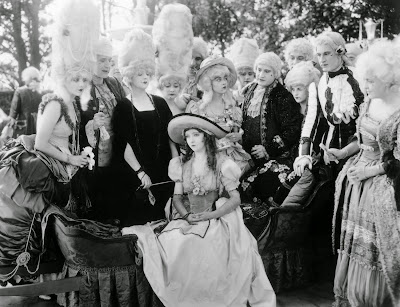 Ladies of the French aristocracy suffer through a big hair day upon the occasion of peasant girl Lillian Gish arriving in their midst.

SOMERVILLE, Mass.—Heat up Bastille Day this year with the fire of revolution! 'Orphans of the Storm' (1921), a sweeping silent film drama set during the uproar of the French Revolution, will be shown with live music on Sunday, July 13 at 2 p.m. at the Somerville Theatre, 55 Davis Square, Somerville, Mass.

Admission is $15 per person. The movie will be screened in 35mm and accompanied by live music performed by New Hampshire silent film composer Jeff Rapsis.

'Orphans of the Storm,' set in 1780s France, follows the story of two sisters, one blind, who seek to cure her vision by risking a trip from their country village to Paris. There, they are soon separated as anarchy erupts, the aristocracy is toppled, and the city is engulfed by the unpredictable chaos of revolution. Will fate reunite the two sisters before the guillotine separates them forever?

The film, part of the Somerville's monthly 'Silents, Please!' series, is being shown in part to mark Bastille Day (July 14), a holiday in France known as La Fête Nationale that celebrates the storming of the notorious Bastille prison in Paris in 1789 as a symbol of the French Revolution.

'Orphans of the Storm,' directed by legendary silent film pioneer D.W. Griffith, features dramatic mob scenes of revolutionary Paris filmed on a massive scale. Also, the story builds towards a spectacular and fast-moving race-to-the-rescue climax that wowed audiences in 1921, making 'Orphans of the Storm' one of the year's biggest hits.

Leading roles in 'Orphans of the Storm' are played by two actual sisters, Lillian and Dorothy Gish, both major stars of Hollywood's silent era. Lillian Gish, an iconic actress of the silent era, went on to a career that lasted long enough to include an appearance on 'The Love Boat' television series in the 1980s. She died in 1993 at age 99.

Younger sister Dorothy Gish also enjoyed a productive career that included stage, film, and television roles into the 1960s; she died in 1968 at age 70.

'Orphans of the Storm' was the last in a string of successful blockbusters helmed by Griffith, who pioneered large-scale historical epics with films such as 'Birth of a Nation' (1915), 'Intolerance' (1916), and 'Way Down East' (1920). Though he continued making films, Griffith was superseded the 1920s by a new generation of filmmakers willing to take his innovations even further, creating the foundation of the motion picture industry we know today.

Although 'Orphans of the Storm' was released nine decades ago, critics today say Griffith's French Revolution epic holds up well for modern viewers. Leonard Maltin praised the film's "lavish settings and race-to-the-rescue climax," judging it "still dazzling." Critic Jeremy Heilman of www.moviemartyr.com wrote "the sheer amount of realized ambition on display in it makes it a sight to behold."

About D.W. Griffith, film historian Kevin Brownlow summarized his genius by writing, "however skillful the other early directors might have been, none of them knew how to project anything but the most basic emotions until Griffith showed them. And it was emotion, rather than close-ups and fade-outs, that made the people of the world fall in love with the moving picture."

The screening of 'Orphans of the Storm' will be accompanied by an improvised score created live by silent film musician Jeff Rapsis. Rapsis achieves a traditional "movie score" sound for silent film screenings by using a digital synthesizer that reproduces the texture of the full orchestra.

• Sunday, Aug. 10, 2 p.m.: 'Chaplin Short Comedies' starring Charlie Chaplin. Program includes 'A Dog's Life' (1918), 'Shoulder Arms' (1918), and others. Spend an afternoon with the Little Tramp on the 100th anniversary of his first screen appearances. The whole family will enjoy restored prints of some of Chaplin's most popular comedies.

• Sunday, Oct. 5, 2 p.m.: 'The Crowd' (1928). Director King Vidor's acclaimed drama about the life of an everyman who aims high, but life has other ideas. Released by MGM near the end of the silent era, and filled with iconic scenes showing the eloquence of silent film at its most fluent.

'Orphans of the Storm' (1921) starring Lillian and Dorothy Gish will be screened in 35mm with live music on Sunday, July 13 at 2 p.m. at the Somerville Theater, 55 Davis Square, Somerville, Mass. General admission is $15 adults, $12 students/seniors. For more information, call (617) 625-5700 or visit www.somervilletheatreonline.com.