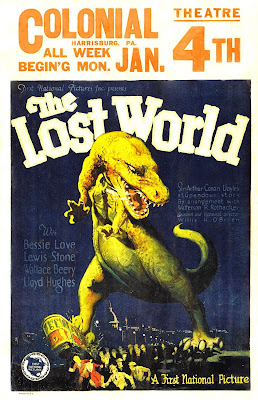 Two screenings of 'The Lost World' (1925) in the past few days gave rise to a few thoughts worth preserving. Fossils, if you will.

I usually end up introducing the shows I do, with the comments often as improvised as the music that follows.

But once in awhile, apart from the usual blah-blah-blah, I find myself saying something that actually sounds worth pointing out.

In the case of 'The Lost World,' the random slot machine of my addled brain came up with an interesting notion, which was this: how fitting for a story about an extinct creatures to be told in an extinct art form.

Dinosaurs and silent film. What a poetic combination!

But then I had another thought. Just as the early filmmakers brought the dinosaurs back to life (at least on screen), so would we (me and the audience) help bring silent film to life.

It was an interesting way of making a point I try to make: that these films were designed from the ground up to be seen a certain way. You need live music, you need a big theater, you need a big audience.

Take any of those away and you're not going to understand why people first fell hard for the movies.

Yesterday's screening of 'The Lost World' was part of a double feature at the Wilton (N.H.) Town Hall Theatre that included 'Tarzan and the Golden Lion' (1927). We had a surprisingly big turnout for a holiday weekend and fine weather (something like 100 people) and the reaction was strong throughout.

And I don't know. Sometimes I just let loose, and that's what happened with the Tarzan film, which came first. I really hadn't prepared anything so I started big and never looked back. And rather than become tiresome, the approach seemed to be just right.

Maybe it's because 'Tarzan and the Golden Lion' is that kind of film: pretty much non-stop action.

I was concerned that I had unloaded too much prior to 'The Lost World,' but that turned out to not be the case. Something about the structure and the pacing of 'The Lost World' provided the break we all needed.

I believe the way the story unfolds, with an extended all-human prologue in London and then the Amazon jungle before the stop-motion dinosaurs make their first appearance, really helped.

So when I amped things up once the exploration party makes it to the plateau, everyone's ears (including mine) were ready for some big stuff again. 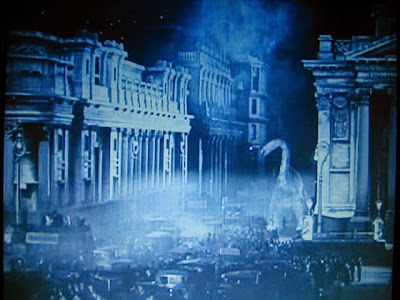 And I have to say that one of the best moments in all silent film is the first sight of the escaped brontosaurus stomping around central London to create the film's climax.

Audiences see this and just go crazy, which is what happened Sunday afternoon in Wilton. There's something about this moment, knowing that it's setting the stage for a century or more of movie mayhem to come, that people feel compelled to cheer.

I think because it's such a genuine moment. Here it is, folks! You're present at the creation! (Or the destruction, really.) 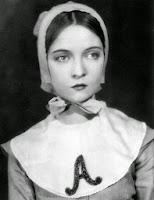 Complete info for each show can be found by clicking 'Upcoming Silent Film Screenings' page at upper right. Hope to see you at a screening real soon!