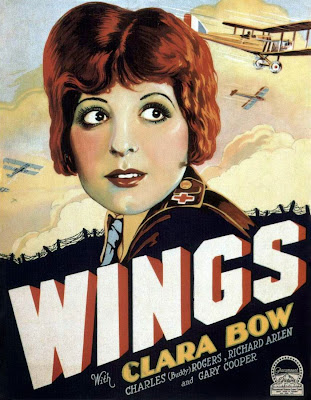 Clara Bow stars in 'Wings' (1927), to be shown with live music on Wednesday, Nov. 19 at 7 p.m. at Harvard University's Carpenter Center. Screening is free and open to the public. More info below!

Yesterday's screening of Langdon's great comedy 'The Strong Man' in 35mm at the Somerville Theatre surprised me by drawing well over 100 people.

Yes, it was a rainy day. But it was also Langdon, who's not exactly a household name, even among film buffs.

In fact, his name has so little recognition that we actually promoted 'The Strong Man' as first picture helmed by a very young Frank Capra.

And they came in numbers enough to make possible the kind of contagious laughter than sometimes happens with silent movies and large audiences.

Here's how it works: Someone starts laughing, which starts other people laughing. And before you know it, you start laughing, too, helpless to resist joining in. 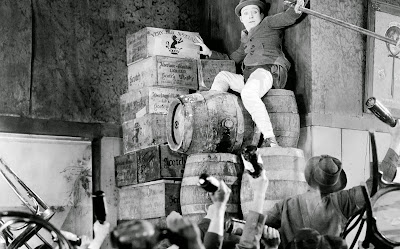 Langdon atop his throne of beer barrels near the climax of 'The Strong Man' (1926).

That's what happened on Sunday afternoon, making for one of the high points so far in the Somerville's ongoing series of screening silent films in 35mm and with live music.

One of the great joys of this series is working with the Somerville's intense veteran projectionist, David Kornfeld.

Those who attend the screenings know David from his colorful on-stage introductions prior to running up to the booth.

But those of us on the "inside" also get regular and detailed reports of prints that pass through David's hands.

These are always entertaining—especially when a print has been somehow mishandled in the past, or if David doesn't like a particular movie.

But David does not hold back when something truly impressive crosses his bench, as it did in the case of 'The Strong Man.'

Check out this excerpt from David's write-up that was circulated among a trusted group of film-lovers prior to the show:

If any of you is on the fence about coming to see The Strong Man today at 2.00, GET OFF THE FENCE & SEE THIS MOVIE.

I just ran it for myself, and the film is nothing short of great (not a word I often use). Langdon movies NEVER SHOW -- EVER -- so this is a rare chance to see a rare, great, wonderful thing.

And the print is TERRIFIC. I think it was struck in 1968, and it sure looks like it came off the camera negative -- or something so close to it I cant tell (which I sort of doubt) -- the detail & the image are fantastic.

I cant praise this movie enough. I know this notice comes late in the day, but trust me & get your butts to the theatre!!!!!!!

You will thank me!

Either way, I've found that working with dedicated fanatics such as David is one of the joys of the vintage film arena.

In his great book about the silent era, "The Parade's Gone By," author Kevin Brownlow pointed out that silent era personalities he interviewed almost without exception displayed an unmistakable spark of enthusiasm and sense of excitement about what they did and about life in general.

I've found the same thing in many people who work with these films today. David's certainly one of them. And it's great that the Somerville has given him a place to practice his vanishing craft.

Speaking of large audiences: I hope we have one for a screening of 'Wings' (1927) on Wednesday, Nov. 19 at 7 p.m. at the Carpenter Center at Harvard University.

It's being run as part of a class, but it's open to the public and you can't beat the admission price: FREE!

Hope to see you there. For more info, check out the attached press release below: 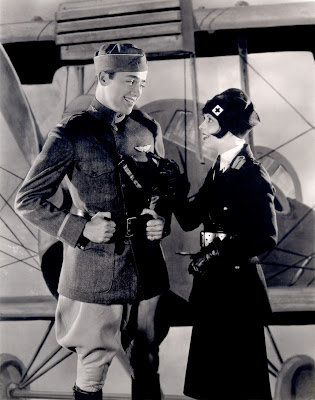 Buddy Rogers and Clara Bow (and a painting of an airplane) from 'Wings' (1927), to be shown this Wednesday at Harvard.

Epic silent 'Wings' (1927) to be shown on Wednesday, Nov. 19 at Harvard's Carpenter Center

Sprawling story of U.S. aviators in World War I won first-ever 'Best Picture'; to be screened with live musical accompaniment

CAMBRIDGE, Mass.—Silent film with live music returns to the Harvard University's Carpenter Center with 'Wings' (1927), an epic adventure set in World War I that won 'Best Picture' honors at the very first Academy Awards ceremony. 'Wings' will be revived for one showing only on Wednesday, Nov. 19 at 7 p.m.

The screening, which is free and open to the public, will allow audiences to experience silent film the way its makers originally intended: on the big screen, with live music, and with an audience.

The screening of 'Wings' will feature live accompaniment by Jeff Rapsis, a New England-based composer who specializes in creating music for silent film presentations.

Seen today, the film also allows contemporary audiences a window into the era of World War I, which began a century ago this year. 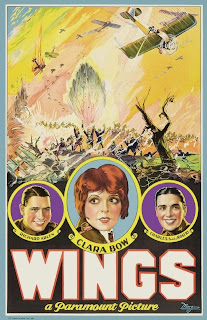 The screening of 'Wings' is presented by the Visual and Environmental Studies at Harvard University and the Harvard Film Archive in connection with a course led by Harvard Prof. Tom Conley.

'Wings' will be screened on Wednesday, Nov. 19 at 7 p.m. at Harvard University's Carpenter Center for the Visual Arts, 24 Quincy St., Cambridge, Mass. The screening, presented by the Department of Environmental Studies and the Harvard Film Archive, is free and open to the public. For more information about the Harvard Film Archive, call (617) 495-4700 or visit hcl.harvard.edu/hfa/. For more about the music, visit www.jeffrapsis.com.