Thanksgiving in N.H.: Chaplin in Concord,
Keaton in Wilton, and 'Prince' in Manchester;
also, thoughts on 'Klinghoffer' at the Met 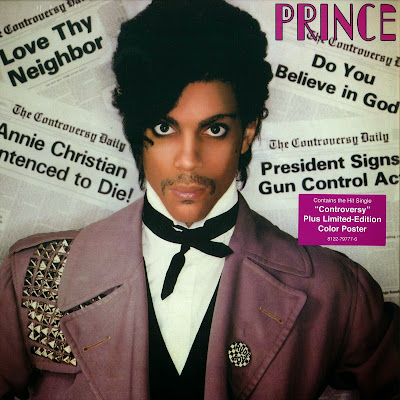 No, not that Prince. I mean MGM's frothy adaptation of 'The Student Prince in Old Heidelberg' (1927), which I'm accompanying on Tuesday, Nov. 25 at the Manchester City Library in downtown Manchester, N.H. 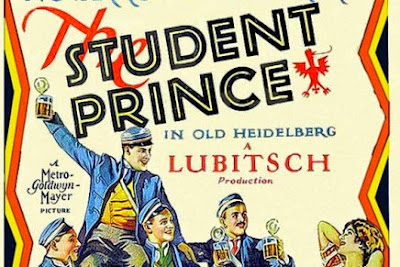 The fun, directed by Ernst Lubitsch, starts at 6 p.m. and the price is right: FREE! So hope to see you there.

I must confess that I'm not a great fan of Lubitsch's silent work. To me, it all comes across as fuzzy—the stories, the characters, the focus.

But I've never scored 'Student Prince,' so I'm prepared to be proven wrong. We'll see how it does in a theater and with an audience. So yes, I need you there.

Also, this weekend sees the return of two silent comedy icons to the big screen: Charlie Chaplin and Buster Keaton. 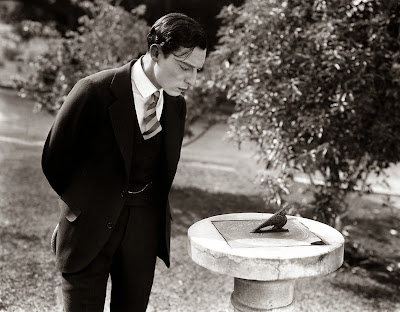 On Saturday, Nov. 29, I'm doing music for an evening of Chaplin short comedies at Red River Theatres in Concord, N.H. The show starts at 7 p.m.; admission is $10 per person.

In past years, I've found Thanksgiving is a good time to uncork classic comedies that for many of us formed the "gateway drug" into silent film.

By the end of a long holiday weekend filled with turkey, football, and shopping, families are hankering for something different.

So taking in a silent film serves as something like a cultural dessert: a cinematic chocolate cream pie. It's a great chance to introduce people to the silent film experience.

And if you're an old hand, I hope you'll consider attending, too. Even if you know Chaplin and Keaton's work better than some of your relatives at the Thanksgiving table, there's nothing quite like seeing these films in a theater with live music and with an audience.

So come one, come all! This Thanksgiving weekend, see for yourself why people first fell in love with the movies. 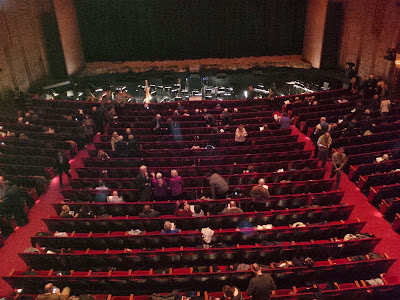 The Met seen from the balcony during intermission at 'The Death of Klinghoffer' on Saturday, Nov. 15. Look at the size of that pit!

The cynic in me wants to credit the Metropolitan Opera with ingenious marketing savvy.

I was really looking forward to taking in the simulcast of their recent production of 'The Death of Klinghoffer' until the broadcast was cancelled due to controversy.

So instead, I hauled myself all the way down to Lincoln Center and paid five times as much to see it in person. Nicely played, Peter Gelb!

The performance was a matinee on Saturday, Nov. 15, the final one in the Met's 'Klinghoffer' run, and also the one that would have been broadcast.

But I'm glad I saw it in person. For one thing, it allowed me to ponder this ad in the program book: 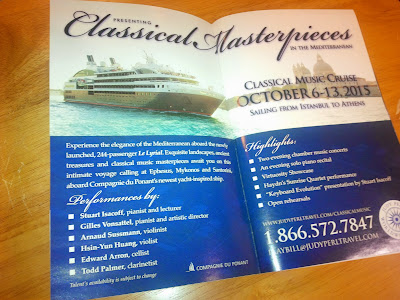 Let's see: an opera about the hijacking of a cruise liner in the Mediterranean Sea in which a wheelchair-bound man is killed and tossed overboard. Is this really the best place to promote this kind of excursion?

It's either tremendous guile or tremendous stupidity. Or possibly both. Either way, the mind reels.

About the opera: the mind also reels. I find myself completely inarticulate about 'Klinghoffer,' but for the best of reasons, I think. 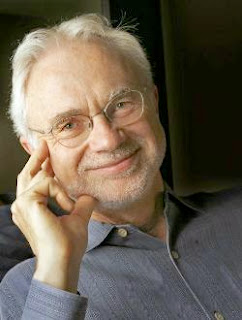 For one thing, I am flat-out bowled over by the musical style that composer John Adams has forged during his career. (That's a recent headshot at left. Amazingly, he grew up right here, in the area of New Hampshire I call home, although he escaped early, first to Harvard and then to California.)

Simply put, I respond to it. It speaks to me in the same way that silent film does: I recognize something in it that reflects the world as I experience it.

Also, it gives me hope that there is music being created today, and tomorrow, that can embody the spirit of the life and times in which we live.

What's more, the music that Adams creates really connects with audiences even upon first hearing, I think. In fact, I know this from personal experience.

Consider: about 10 years ago, I attended a New Hampshire Symphony Orchestra concert at the Palace Theatre in downtown Manchester, N.H.

At intermission, I strolled outside onto Hanover Street, where I encountered a young couple wandering aimlessly on a Saturday night.

They asked me what was going on at the Palace, so I impulsively invited them in to check it out. They didn't have tickets, but not to worry: it was after intermission and there were plenty of empty seats where I was sitting in the balcony. (Alas, that's one reason the New Hampshire Symphony is no longer with us.) Just walk in with me like you belong, I said.

They agreed. The fact that my new friends both sported multi-colored hair, ample facial piercings, and were dressed in leather from head to toe didn't seem to faze anyone as we walked past the ushers and made our way up to the balcony.

The piece right after intermission was 'The Chairman Dances,' adapted by John Adams from his 1987 opera 'Nixon in China.' Conducted by Ken Kiesler, the music was mesmerizing right from the downbeat.

Really! It had a presence that riveted the attention of everyone in that auditorium for the duration of the piece, all the way to the final petering out of the piano/percussion combo.

During the applause that followed, one of my new friends asked: "It is always like this?"

Well, not always. But Kiesler and the NHSO followed the Adams with a performance of Respighi's 'The Pines of Rome' that, as David Letterman might have put it, blew the roof off the dump.

Fast forward to now. For the past five years or so, I've been making so much of my own music in live performance that I've neglected exploring music of others.

But seeing 'Klinghoffer' prompted me reconnect with Adams. Prior to 'Klinghoffer,' I ordered a few used CDs online and was surprised to get one actually signed by the composer: 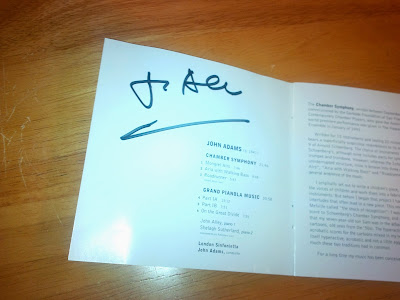 An omen? Time to start taking my own style and start committing it to paper?

Well, could be. 'Klinghoffer' got me all excited about making music beyond the limits of my current improv-based silent film scoring.

For instance: I still think an opera based on the Pam Smart saga could really be something. So we'll see.

I'm reminded of that part of Vonnegut's 'Breakfast of Champions' where Kilgore Trout awakens to the possibilities of attending the arts festival in far-off Midland City, Ohio.

As he mutters to his parakeet Bill: "There's work to be done."