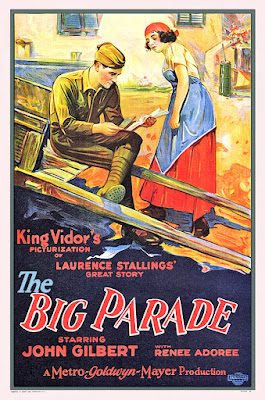 An original poster for MGM's blockbuster 'The Big Parade' (1925).

Looking for something different to mark Independence Day?

Then march on over to the Somerville Theatre in Somerville, Mass., where I'm doing live music for a screening of 'The Big Parade' (1925) in 35mm on Sunday, July 5 at 2 p.m.

Despite now being 90 years old, this amazing movie—all about American soldiers who ship off to Europe to join in World War I—has lost none of its emotional impact.

Directed by a very young King Vidor, the film set new standards for realism in the then-still-new medium of cinema. It was the 'Saving Private Ryan' of its time, as mentioned in the press release below.

The result was an enormous blockbuster for MGM, which had just been created by a recent merger. 'The Big Parade' caused a sensation, becoming the studio's highest-grossing picture up until 'Gone With the Wind' hit the screen in 1939.

What I like most about 'The Big Parade,' and what I think still works just as intended, is its very simple but powerful structure.

Vidor directed the first half of the film in the style of a light romantic lark. We follow the GIs into the French countryside, where they bunk together in barns and get to know one another—and we get to know them. Plenty of hijinks ensue, including flirting with the local women, with no shortage of humor. It's kind of like a Sad Sack comic book story come to life. 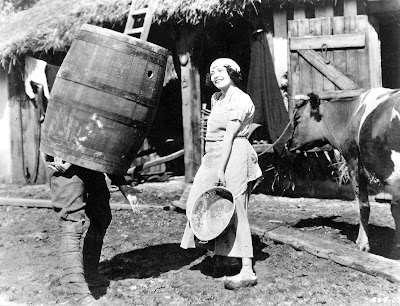 That's John Gilbert under the barrel, getting to know a French village gal played by Renée Adorée.

But then the men get called up to the front, and everything changes. Vidor takes the men we've gotten to know and marches them into the trenches, and we can't help but be pulled along with them. We're suddenly in a world of darkness and mud and giant explosions and shrapnel and death everywhere. 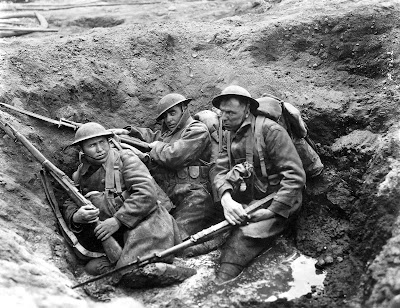 Who will make it? Who will not?

I've accompanied this film many times now, and the structure never fails. You get to know these characters, and then you're tossed into the trenches with them. Everything is suddenly more intense, more vivid, more urgent, and more real. It's as if you wake from a dream but then get caught up in a nightmare.

Vidor not only brought you visually into places most audiences had never been taken, but his structure helped mimic the emotional landscape of battle. His structure helps us feel at least a little bit of what it's like to be part of a group now facing danger in a strange land for a cause that may or may not be worth fighting for, despite your duty.

With this in mind, it's a great film for music. To help underline the contrast, I've found it works well to score the whole first half as if it's one of those Sigmund Romberg operettas—a fanciful European fairytale.

Then, in the second half, I shift to an entirely different and much more aggressive style of accompaniment to communicate how things have changed. To me, the point where there's no turning back is the scene when the soldiers emerge from a forest and move out onto a blasted battlefield that's under continuous shellfire. No more Romberg from then on, folks.

'The Big Parade' is sometimes called the first "anti-war" film, but I think that's overemphasizing one aspect of it and putting it into a box in which it doesn't fit.

Rather, I think it celebrates the whole complex experience of being an American and serving one's country. And I can't think of a more satisfying way to finish a weekend of fireworks celebrating our nation's birth.

So come see 'The Big Parade.' More info about the screening is in the press release below. Hope to see you there!

P.S. Interesting trivia about 'The Big Parade'...renowned painter Andrew Wyeth first saw the film with his father in 1925, sparking a life-long interest. In a 1975 letter to director King Vidor, Wyeth claimed to have seen the film more than 200 times! For more info, check out info on this lecture at the Farnsworth Museum in Maine, where I've been trying to program 'The Big Parade' for some time now. How about it, guys? 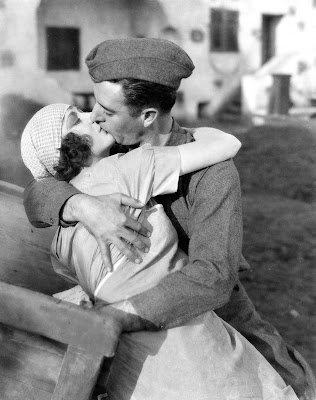 The classic shot: John Gilbert and Renée Adorée in 'The Big Parade' (1925).

Epic war movie 'The Big Parade' to be screened in 35mm on Sunday, 7/5 at Somerville Theatre

To be shown with live music; blockbuster silent film drama
changed the way Hollywood depicted battle on the screen

SOMERVILLE, Mass. — It was the 'Saving Private Ryan' of its time — a movie that showed audiences combat as experienced by a soldier whose life is changed forever by the horrors of war.

It was 'The Big Parade' (1925), a sprawling World War I epic and a box office sensation that made MGM into a powerhouse studio in Hollywood's golden years. It's the latest installment of 'Silents, Please!,' a monthly silent film series with live music at the Somerville Theatre.

'The Big Parade' will be screened in 35mm one time only at the Somerville Theatre on Sunday, July 5 at 2 p.m. General admission is $15; seniors/students $12.

'The Big Parade,' released just a few years after World War I ended, was hailed by critics as the first Hollywood film to depict the harsh reality of combat and its impact of troops in the trenches and foxholes. Its hellish battle scenes were staged on a massive scale and still retain their ability to shock audiences.

The picture, based on the best-selling novel "What Price Glory?", follows the story of a young man (John Gilbert) who rebels against a privileged background by enlisting in the army just before the U.S. enters World War I.

Other upcoming features in the Somerville's silent film schedule include:

• Sunday, Aug. 2, 2 p.m.: 'Speedy' (1928) starring Harold Lloyd. Can Harold New York City's last horsedrawn streetcar line from the clutches of a greedy transport tycoon? The Big Apple co-stars in one of Harold's great silent comic masterpieces. Plus an extended cameo appearance from none other than Babe Ruth!

• Sunday, Sept. 13, 2 p.m.: 'The Matrimaniac' (1916) starring Douglas Fairbanks Sr. An unusual program that contrasts this early Fairbanks marital farce with another picture released by the same studio after Fairbanks had moved on, but which uses material from the Fairbanks film to support an entirely different story.

MGM's silent blockbuster ‘The Big Parade’ will be shown in 35mm and with live music on Sunday, July 5 at 2 p.m. at Somerville Theatre, 55 Davis Square, Somerville, Mass.