Finding my way to this year's 'Mostly Lost':
joining in an interactive vintage film event 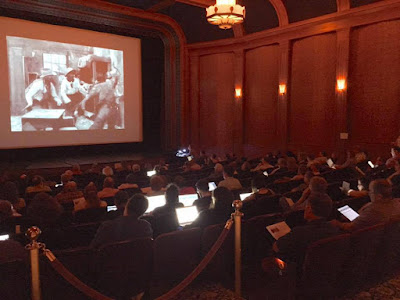 My own photos of Mostly Lost in action were—well, mostly lost causes. This one is borrowed from accompanist Ben Model.

What happens when you assemble dozens and dozens of unidentified film clips, and then run them in a theater full of vintage movie experts armed with Internet access?

You get 'Mostly Lost,' a unique classic movie gathering—unique in that it actually encourages audience members to talk (the louder the better), check their laptops, and generally raise a ruckus, all while a film is running.

The idea is that someone might be able to identify something on screen: an actress, a location, a detail that fixes a year or date. And often, that's enough for everyone else to start calling out suggestions or mining the Internet for more info to nail down the film's title.

The thing is, it works! More often than not, a film is identified thanks to the collective brain power of some of the film community's biggest nerds—er, leading aficionados. 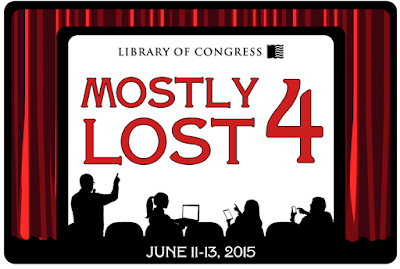 And I've seen it in action, having just returned from attending the most recent edition of "Mostly Lost," now in its fourth year at the Packard Center of the Library of Congress down in Culpeper, Virginia.

The full "Mostly Lost" is three days of film screenings and other events. But a tight schedule meant I could only make it down for the final day on Saturday, June 13.

Even so, a visit to the Packard Center earlier this year (thanks, Rob Stone!) had me eager to see "Mostly Lost" in action.

That, and a $59 round-trip airfare (that's no misprint) on JetBlue out of Hartford was enough for me get down there. And I'm glad I did.

What really surprised me is how interactive the whole process is. Once the films start running, one after another, everyone joins in. And I mean everyone—not just the big-name experts on hand, but just plain folks of all ages. They all throw out suggestions, comments, corny jokes, and anything else that comes to mind.

It's surprisingly refreshing—because, I think, we're so used to experiencing cinema as a passive art form. We sit, we watch. But at "Mostly Lost," we engage with the screen in a way that transforms movie-going into a collaborative effort. 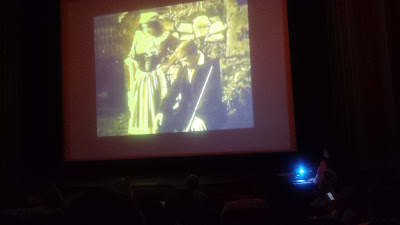 The view from my seat on Saturday during 'Mostly Lost.' That's Phil Carli at the keyboard at lower right.

I think it's a close cousin to what an accompanist does in creating a live score for a silent film. The real-time involvement with the motion picture is engrossing, absorbing, and satisfying in a way that transcends cinema as a passive activity.

At Mostly Lost, the screenings take place in the Packard Center's comfy and well-appointed theater. No conference room atmosphere here, folks—it's one case in which I can see my federal tax dollars put to good use. (Actually, the whole Packard Center is like that. We'll see how I feel next April 15, though.)

Sessions are broken into chunks of roughly 90 minutes each, and follow a definite pattern.

At first, we all stare at whatever footage comes up. Then invariably, someone recognizes something—often a performer, with a comment such as "that's the guy who played the orphanage director in Chaplin's 'The Kid,' but I don't remember his name.

Then someone else remembers the guy's name, and soon the cross-referencing begins, checking cast lists against plot summaries against studio production lists, all online in various places.

So it's like a crossword puzzle. Often, if you get one solid answer, you can fill in many other things based on that. And before you know it, the formerly unknown film now is now reconnected with its name, production date, studio, cast, and so much else. 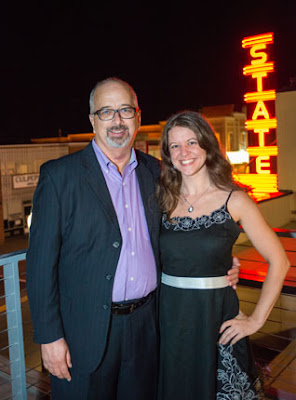 At this year's Mostly Lost, selections ran the gamut from "Unidentified Auto Comedy" to "1917 Crime Melodrama." The Saturday session I attended included American films in prints from the Netherlands that sported Dutch intertitles that no one could really translate in real time. "GOUD IS LOKKEND EN MACHTIG," anyone?

Still, almost all the films were positively identified via records of their original U.S. release.

And even if what's on screen isn't entertaining, usually the commentary is. Few things are funnier than a room full of film experts watching footage of an unidentified travelogue from Verona, Italy that consists entirely of long sustained shots in which absolutely nothing moves.

"I think I can see the ivy growing!" shouts accompanist Phil Carli, part of a chorus of increasingly irate comments.

Speaking of which: nearly all the fragments are from the silent era, meaning the festival's three accompanists were kept busy. Carli was joined at the keyboard by Ben Model and Andrew Simpson, who took turns, swapping out for each film. They're among the best in the field, and one of the delights of the festival is hearing them create accompaniment for fragments of film they've never seen before, sometimes while also shouting out their own suggestions.

Phil, it seems, has an encyclopedic knowledge of vintage autos, which comes in handy. Absent other clues, the shape of a car's running board can sometimes pinpoint when a film was (or was not) produced.

If someone has a lot to say about something on-screen, the person is handed one of the wireless microphones and allowed to talk freely. That happened to me during another travelogue, which came to us identified only as scenes from Switzerland.

When the footage screened, I was surprised to recognize scenes of the Landwasser Viaduct, a landmark structure on the mountain railway that links Chur with St. Moritz high in the Alps. Just last year, I had ridden on and photographed this line, and immediately knew what it was.

The iconic stone viaduct soars over a deep gorge before plunging into a tunnel in the side of a vertiginous cliff face. The line as a whole is famous because of how it loops around and on top of itself several times to gain altitude as it climbs up the narrow valley. It looks a model railroad layout, but in real life! 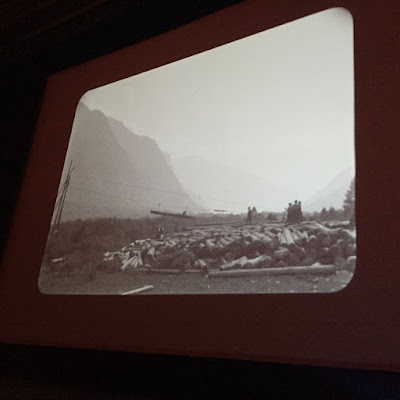 Accompanist Ben Model snapped this pic of the Swiss travelogue during Mostly Lost.

So I started spouting off—and the next thing I know, I'm holding one of the wireless microphones and I'm narrating a vintage travelogue about Switzerland, drawing upon my arcane fixation with railroads as well as my half-assed knowledge of the mountain culture of my wife's people.

And when that failed me, I resorted to stand-up, even though I was sitting down.

"Here we see scenes of an Alpine logging operation," I remarked. "If this had been a sound film, right now you would undoubtedly be hearing plenty of yodeling."

Accompanist Phil Carli immediately obliged by shifting the music into a bumptious folk idiom, topping it off with a scrap of melody from the well-known theme song to the "Swedish Chef" of Muppets fame, for which he apologized even before he'd finished playing the phrase. Wow! 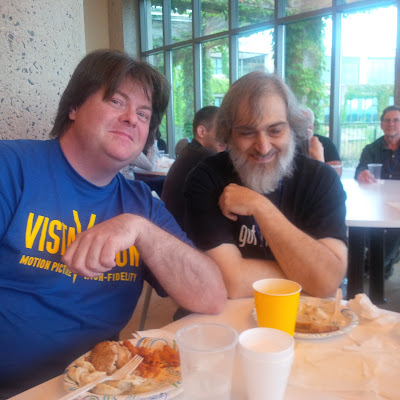 'Mostly Lost' is a chance to catch up with folks such as film experts Bruce Lawton and Eric Grayson, seen here enjoying mostly lunch.

As the day progressed, I expected to get a little antsy as the grind of fragments wore on. But that never happened. Instead, time flew, with each piece of film bringing the possibly of discovering something special or unknown.

The atmosphere was buoyed, I think, by the energy of all that film nerd power in one place, and all focused on a single shared task. Think of it: Some of these people had been preparing 40 years or more for this moment!

Plus, special presentations throughout the event broke things up. The day I was there, film buff Jim Kerkoff presented "Visiting Roach Royalty," a delightful account of his efforts to track down living ex-employees of Hal Roach studios during visits to the Los Angeles area back in the 1980s.

Things were taken up a notch for public events in the evenings, for which "Mostly Lost" moved from the Packard to the marvelous State Theatre in downtown Culpeper.

The night I was there saw the U.S. East Coast premiere of the newly discovered and restored 'Sherlock Holmes' feature film from 1916. 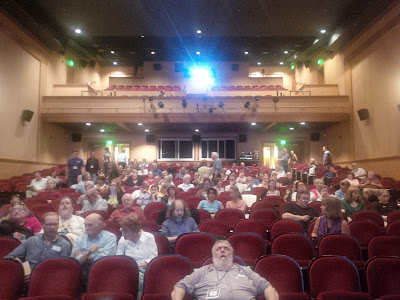 The audience gathers prior to the 'Sherlock' screening.

Restoration lead Robert Byrne (president of the San Francisco Silent Film Festival) delivered a well-illustrated presentation of what it took to rehab the single print discovered last year in the archives of the Cinémathèque Française.

Then the lights went down, and we watched the film, with great live piano accompaniment from Phil Carli. 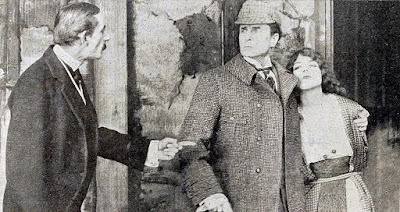 A scene from the long-lost 1916 feature film 'Sherlock Holmes,' in which actor William Gillette played the role he made famous on the stage.

And as it played out on the screen before us, I found myself marveling at how fortunate we were to be able to see a film considered lost for nearly a century. And yet here it was, with nary a scene missing and looking pretty darn good for a 1916 Essanay feature.

So if I had to comment on anything, it might be the festival's name. With so much footage being identified, and with marquee attractions such as the newly restored 'Sherlock,' maybe it should really be called something else: 'Mostly FOUND.'