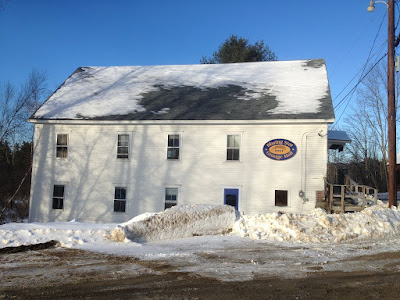 The Blazing Star Grange Hall in Danbury, N.H.—in a photo from last year, when we had a bit more snow.

Who needs a time machine to visit the past?

Just come on up to Danbury, N.H., where the entertainment this Saturday night is a Harold Lloyd silent film program shown in a real-life New Hampshire Grange Hall.

Like silent film, the Grange had its heyday in another era. At a time when most people earned their living directly from the land, the Grange was an important institution that encouraged responsible land stewardship, good animal husbandry, sound agricultural practices, and strong communities.

The Grange is still active in communities here and there, including the "Blazing Star" chapter in Danbury, N.H., which continues to operate now well into the 21st century.

But how thing have changed! Instead of encouraging good animal husbandry, they're now doing dissolute activities such as showing Harold Lloyd films on a Saturday night. For shame!

Actually, the Blazing Star Grangers are all wonderful people who are careful stewards of a wonderful vintage hall where meetings still take place.

Last year, a Buster Keaton program we did was a big success. That, coupled with all the effort that went into creating a movie screen to fill the hall's proscenium stage, led to this weekend's follow-up program of Harold Lloyd films.

We're starting with 'Never Weaken,' one of Lloyd's shorter "thrill" comedies. Then the main attraction is 'Grandma's Boy' (1922), the picture that launched Lloyd into feature-length films. 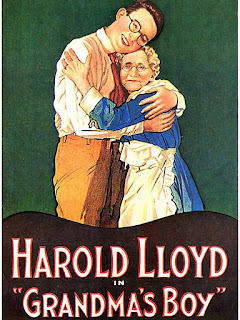 'Grandma's Boy' is a good one for the Grange because it's set in just the kind of community where the group would have flourished at the time.

And think about it: Almost all films from the silent era now carry at least some historical interest, in that they're accidental records of how people dressed, acted, and lived in past times.

Even a low-budget contemporary romance shows life as it was lived about 100 years ago, and is interesting just for that alone, I think.

But 'Grandma's Boy' is especially rich in this respect, in that it's full of scenes that show how everyday life was changing in so many ways in the 1920s. America was moving from the country to the city, and 'Grandma's Boy' captures this transition quite naturally.

It's filled with things that were once a part of daily life, but which we no longer do on a regular basis.

A good example (SPOILER ALERT!) is the film's opening gag: we see Harold working up a sweat turning a crank, and we assume he's starting a stubborn car. But a pullback shot reveals he's actually involved in the much-less manly activity of turning a hand-cranked ice cream machine.

How many audience members today have any real life experience with either activity? And yet people still always laugh at the gag.

Another example is gasoline. If I get a chance to introduce 'Grandma's Boy,' I always remind people that at the time, gasoline was regarded as a cleaning agent or a disinfectant as much as it was a fuel for the new-fangled automobiles.

Absent this knowledge, a sequence involving gasoline would puzzle modern viewers, or at least be enough of a head-scratcher to take viewers out of the moment.

(It's the same with the "goat glands" gag in Buster Keaton's short comedy 'Cops.' But that a whole other story.)

So come take a trip to the past this Saturday night at the Blazing Star Grange. More info in the press release below: 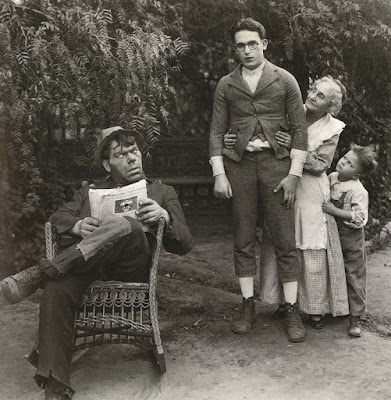 Harold Lloyd prepares to confront a tramp. Hey, how'd that kid get in there?

Showtime is Saturday, March 19 at 7 p.m. at the historic Grange Hall, 15 North Road in Danbury. The show is open to the public with suggested $5 donation.

Audiences loved 'Grandma's Boy' when it was first released, and the picture helped establish Lloyd as a major star for the rest of the silent film era. 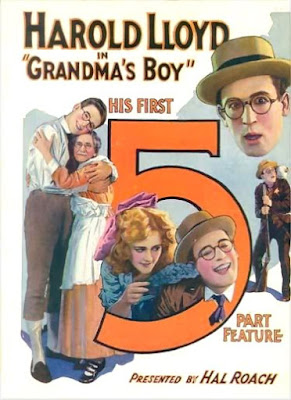 The Danbury Blazing Star Grange silent film program will open with 'Never Weaken' (1921), a Harold Lloyd short comedy released before he made the jump to feature-length movies.

With the release of Lloyd's films on DVD, audiences are rediscovering his timeless genius. The reissue sparked a demand for screenings in theaters, where the Lloyd films continue to cast their spell on audiences.

Shown in a theater with live music, Lloyd's features maintain their power to delight movie-goers.

"Times have changed, but people haven't," Rapsis said. "The Lloyd films were designed to be shown in a theater with an audience, and to appeal to a worldwide audience, and their universal themes haven't lost any relevance," said Rapsis, who has performed music for silent films in venues ranging the Donnell Library in New York City to the Kansas Silent Film Festival.

Using original themes, Rapsis improvises the music live as the films are shown.

"When the score gets made up on the spot, it creates a special energy that's an important part of the silent film experience," said Rapsis, who uses a digital synthesizer to recreate the texture of a full orchestra for the accompanimemt.

‘Grandma's Boy’ (1922), a classic silent comedy starring Harold Lloyd, will be shown on Saturday, March 19 at 7 p.m. at the Blazing Star Grange Hall, 15 North Road, Danbury, N.H. The program is open to the public. Suggested donation $5. For more info, visit www.blazingstargrange.org; for more info on the music, visit www.jeffrapsis.com.effrapsis.com.