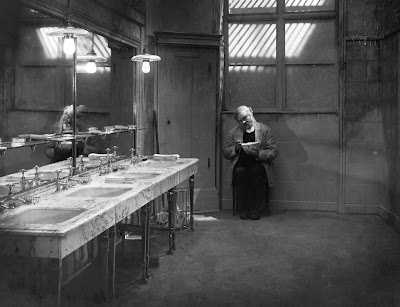 Tonight brings the chance to do music for one of my personal silent film favorites: 'The Last Laugh' (1924).

The screening is tonight (Friday, March 18) at 7 p.m. at Red River Theatres in Concord, N.H. Admission is $10 per person; for more details, see the press release below.

Many reasons for liking it: the overall concept, the way the story is told visually (with almost no intertitles!), the amazing performance of Emil Jannings in the lead role; the quality of the photography; the way director F.W. Murnau used the then-new medium of cinema so creatively.

But to me, the most important thing about this film is the reaction it inspires. I've accompanied it several times, and each screening provokes a very strong response from an audience. There's something about how Murnau presents the plight of his main character that works on a group of people.

So it's another case of silent film needing its natural environment — live music, and a live audience — to really be experienced as it was intended, I think.

I invite you to come join us tonight in Concord, N.H. and see for yourself! 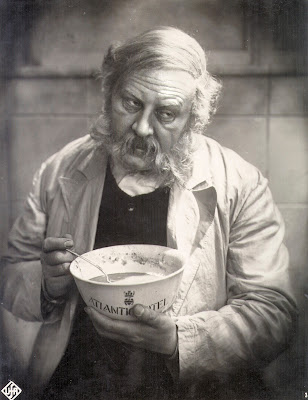 In 'The Last Laugh,' regarded as one of German director F.W. Murnau's best pictures, the story is told entirely in visual terms, without the use of title cards.

The film, a character study that chronicles the mental breakdown of an aging man who loses his position of authority, is also noted for its revolutionary use of camera movement.

Playing the lead role is Swiss/German actor Emil Jannings, widely recognized as one of the most versatile actors of early cinema.

Jannings would later move to Hollywood, where he earned the first-ever Best Actor Oscar at the inaugural Academy Awards for his towering performances in 'The Last Command' (1928) and 'The Patriot' (1928).

Critics and film writers regard 'The Last Laugh' as a landmark of early cinema.

" 'The Last Laugh' is a masterpiece of psychological study, perhaps the best ever portrayal of what goes through one man's mind under varying situations ... It is absolutely mind-boggling to see Emil Jannings age at least 10 or 15 years right in front of our eyes in the course of a couple of minutes," wrote author Robert K. Klepner in 'Silent Films' (2005).

Critic David Kehr of the Chicago Reader described 'The Last Laugh' as "the 1924 film in which F.W. Murnau freed his camera from its stationary tripod and took it on a flight of imagination and expression that changed the way movies were made."

The film's director of photography, Karl Freund, set new standards of cinematography in 'The Last Laugh,' setting up the camera to move through corridors and "see" action through a character's eye-view.

Freund's long career later included work in television in the 1950s in Hollywood, when he developed the "three camera" system for the "I Love Lucy" show, which became the standard format for shooting situation comedies.

'The Last Laugh' will be accompanied by live music by Jeff Rapsis, a New Hampshire-based silent film accompanist who performs at venues across the region and beyond.

"Films such as 'The Last Laugh' were created to be shown on the big screen and in a theater as a communal experience," Rapsis said. "With an audience and live music, they still come to life in the way their makers intended them to.

'The Last Laugh' is the latest in an monthly series of great silent films with live music at Red River. Upcoming programs include:

• Friday, May 13: 'The Golem' (1920), a pioneering German fantasy in which a rabbi brings a statue to life protect the Jews of 16th century Prague from persecution.

• Friday, June 10: 'The General' (1927), Buster Keaton's classic comic adventure epic of an Southern engineer and his locomotive during the U.S. Civil War.