Celebrate St. Patrick's Day with silent comedy
on 3/17 at the Flying Monkey in Plymouth, N.H. 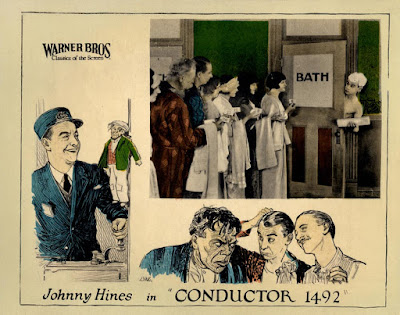 Since last posting anything, I've gone through a busy period that included a half-dozen screenings at the Harvard Film Archive, the Kansas Silent Film Festival, and many other events crowding the schedule.

I'm still in recovery mode, and will round up accounts of those adventures very soon.

But as I'm one-quarter Irish, I can't let St. Patrick's Day go by without blowing off me big dord (an ancient bronze horn native to Ireland) about a program that's sure'n to be coming up tomorrow night.

As part of our monthly series at the Monkey, we're running 'Conductor 1492' (1924), a breezy Irish-themed comedy starring Johnny Hines. Showtime is Thursday, March 17 at 6:30 p.m. Details in the press release pasted in below.

Hines may be totally forgotten, but the film really holds up well as an ethnic comedy of its time, poking gentle fun at the Irish experience in America.

As a warm-up, we're also screening one of Buster Keaton's short comedies. So it'll be a fun-filled evening of silent film with live music, and I hope you'll be joining us, arrh to be sure. (All right, enough!) 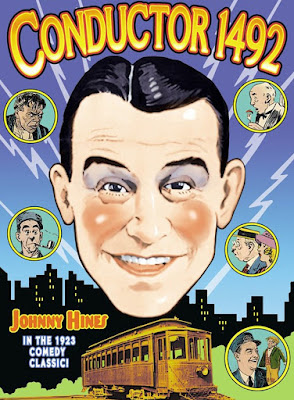 Johnny Hines in 'Conductor 1492' to be screened with live music at Flying Monkey on Thursday, March 17

'Conductor 1492,' a 1924 movie starring Johnny Hines, will by shown with live music at the Flying Monkey Moviehouse and Performance Center on Thursday, March 17 at 6:30 p.m.

Live music will be provided by Jeff Rapsis, a New Hampshire-based silent film musician who frequently accompanies programs at the Flying Monkey.

The program will also include Buster Keaton's short comedy 'My Wife's Relations' (1922), in which Keaton accidentally marries into an Irish family.

Admission to the program, which is part of the Flying Monkey's monthly silent film series, is $10 per person.

'Conductor 1492' follows the exploits of Terry O'Toole (Johnny Hines), a young man who leaves Ireland to make his fortune in 1920s America.

After arriving, he gets a job as a conductor on a streetcar and fights off an attempt by crooks to take over the company, all the while pursuing the boss' beautiful daughter.

The film, released in 1924 by Warner Brothers, takes a light-hearted look at the immigrant experience in America at the time, as seen through Irish eyes.

In his films, Hines often portrayed energetic young men eager to get ahead in business and find success—a popular theme in the booming years of the 1920s.

Although his movies were well-received, Hines never rivaled comic mega-stars of the era such as Charlie Chaplin or Buster Keaton.

Described by one historian as the "Jack Lemmon of the silents," Hines had a likeably extroverted screen personality, starring in about 50 motion pictures, most of which are lost and unavailable today.

'Conductor 1492' is considered one of Hines' better surviving titles. Directed by his brother Charles Hines, the picture contains several highly comic sequences and is frequently run at revival events.

The film is classified as an "ethnic comedy" that satirizes the Irish experience in America.

Irish immigrants had been a significant presence in the United States beginning in the 1840s. By the 1920s, the Irish had become well-established enough to be the focus of good-hearted satire, of which 'Conductor 1492' abounds.

Another surviving Hines feature, 'The Crackerjack' (1925), will be screened to round out the Flying Monkey program.

With the advent of sound in the motion picture industry, Hines' career went into decline. During the 1930s, he would appear in only six films, all in smaller, supporting roles.

In 1938 he would have his last significant role, that of Parsons in 'Too Hot to Handle,' which starred Clark Gable and Myrna Loy.

• Thursday, April 14, 2016, 6:30 p.m.: "The Thief of Bagdad" (1924). Eye-popping spectacle starring swashbuckling star Douglas Fairbanks Sr. in top form as Arabian adventurer who must complete a series of epic tasks to save his beloved.

All movies in Flying Monkey's silent film series are rarely screened in a way that allows them to be seen at their best. To revive them, organizers aim to show the films as they were intended—in top quality restored prints, on a large screen, with live music, and with an audience.

For more info, call the box office at 603-536-2551 or visit www.flyingmonkeynh.com. For more info on the music, visit www.jeffrapsis.com.