Turning Mount Kilimanjaro into music—
with help from the N.H. Philharmonic 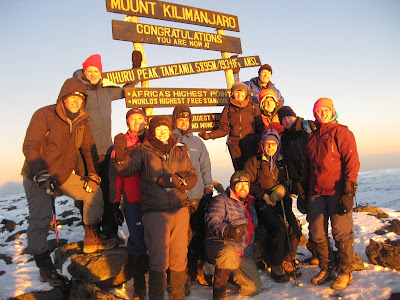 Our team greets the sunrise on the summit of Mount Kilimanjaro on January 10, 2015. I'm kneeling in front, mostly due to exhaustion.

Heading into a quiet stretch for silent film accompaniment: no shows until a four-day stretch in late June that includes a return gig at the wonderful Revue Cinema in Toronto, Canada.

But I'm thankful for the break because it'll give me a chance to make progress on another musical project I'm pursuing: an orchestral piece about Mount Kilimanjaro.

I got a chance to climb Mount Kilimanjaro last year as part of a group of 12 people. Our nine-day trek, climaxed by an overnight slog to reach the summit at sunrise, was an awesome experience.

It was also an unexpectedly musical experience. Singing of all types takes place on the slopes of Africa's highest mountain: folk songs, spirituals, hymns, and so much more.

And I found the snow-capped mountain makes its own kind of music, too.

So now I find myself pulling together an orchestral score that captures something, I hope, of the Kilimanjaro experience. 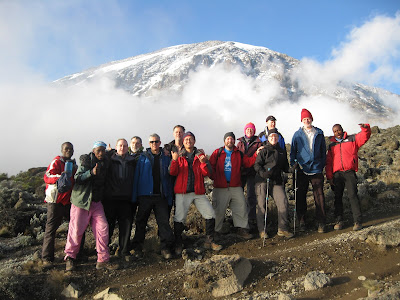 Our team and some of our guides on the way up. Still a ways to go!

And just as Kilimanjaro looms over the countryside, a read-through of my score-in-progress looms over my own day-to-day activities. Sometime this fall, members of the New Hampshire Philharmonic expect to play through it in preparation for a performance during their 2016-17 season.

I'm very excited by this opportunity, and grateful to music director Mark Latham and the orchestra for their willingness to encourage new music.

How did this happen? It's one of those "it was meant to be" series of events, I guess.

Prior to departing for Africa, I was contacted by the Philharmonic to be involved with a program of film music they were planning.

Alas, I couldn't join in because the concert date was when I would be on Kilimanjaro. (Now there's an excuse you don't get to use very often.) 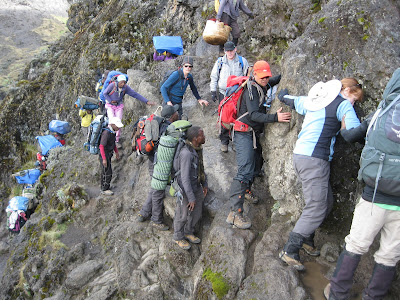 After leaving Barranco Camp, our team negotiates the "Breakfast Wall" on Day 6.

Well, it turned out that music director Latham has extensive family ties to the legendary mountain, which is Africa's highest and also the tallest free-standing mountain in the world.

Mark comes from a family of medical officers who were among the first British officials to settle in Tanzania after Germany ceded control of its African territories following World War I.

So Mark's immediate ancestors were among the first English settlers to explore the slopes and summit of Kilimanjaro. Mark's grandfather was actually the first Englishmen to summit the mountain, back in 1926. (Germans had been on the peak before that, but prior to European settlement, there's no record of anyone venturing to the top.)

Today, several features on the mountain carry the name of Latham family members. For example: a spot we passed on the summit rim, Stella Point, is named in honor of Mark's great aunt, the first woman to reach the summit.

And Mark's grandfather was the guy who came across (and photographed) the leopard carcass high on the peak, which inspired Ernest Hemingway's 'The Snows of Kilimanjaro.'

I learned all this because prior to our trip, Mark graciously sat down and showed some of us his Kilimanjaro photo album and other priceless heirlooms from the family's days in what was then British East Africa.

He also shared his own experiences of climbing the mountain with his father back in 1976, on the 50th anniversary of his grandfather's first ascent.

We were stunned and grateful to get this insider's perspective on Kilimanjaro prior to departing. (Mark was actually born in Tanzania.) Imagine climbing a world-famous peak with a number of features named after family members of someone you had dinner with!

There's even a book about the family's experiences. It's called Kilimanjaro Tales: The Saga of a Medical Family in Africa.

After we scaled the peak in January of last year, Mark and I talked about the mountain, and he was willing to take a chance on Kilimanjaro made into music.

So I've been sketching out some notions in the hopes of capturing some of the experience in score.

As I understand it, the Phil (as it's called by its close friends) plans to include it in a concert that features visual elements: in this case, images of Kilimanjaro projected on a screen while the music gets played.

Me, I'm thrilled at the opportunity to work on music that's getting written down.

Most of my silent film work is improv-based, which is the best way for me to work in that field. For quite some time now, I've been developing my own musical idiom, such as it is.

But I'm at a point where I have a sense of what kind of music I want to write down, and to try to get performed. 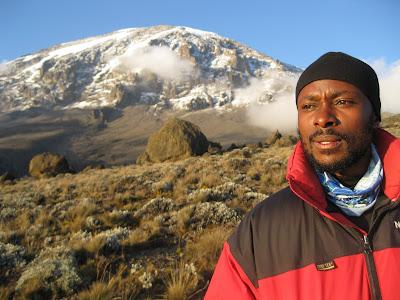 Our guide Elly Anase, who got us all to the summit safely, with the help of a lot of Diamox.

So I've been refining some ideas and also recently updated my Finale scoring software. Last time I used it was in creating the score for 'Dangerous Crosswinds' (2005), a feature-length drama directed by New Hampshire filmmaker Bill Millios.

And in another coincidence, back then the film's cues were played by members of...The New Hampshire Philharmonic. So we go way back, this orchestra and me. :)

So I have a stretch of time coming up to push ahead with the Kilimanjaro score. And I think going public with it will help me stay focused and ensure that I'm motivated to get it done, rather than keep thinking I'll get to it when I have that most elusive object, "more time."

For me, getting anything done is very similar to how we got to the top of Kilimanjaro: one step at a time.