Great movie, unfortunate title: 'The Winning
of Barbara Worth' on Thursday, June 9 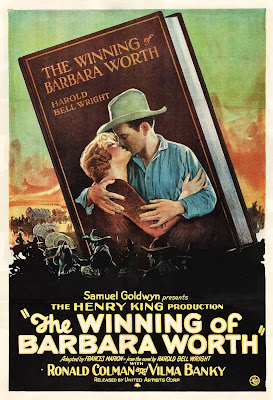 When I first heard the title of the movie 'The Winning of Barbara Worth,' I thought it must be something about auctioning off women to the highest bidder.

And when I learned it was actually a drama that centered on irrigation, it moved further down my list of "must-see" films.

Well, yes, it's a terrible title. And yes, it is about irrigation.

But all that disguises a terrific silent film with a whole lot going for it:

• Direction by Henry King at the height of his powers.

• A spectacular flood sequence that never fails to mesmerize an audience.

I first saw parts of this film thanks to Kevin Brownlow, who included sequence from it in his "Hollywood" documentary series about the silent film era.

Brownlow, the legendary British film preservationist and advocate, included the material in a presentation he gave a few years ago at the University of Arkansas, for which I was privileged to supply musical accompaniment.

I was amazed at the flooding sequence, and so sought out the whole picture.

'The Winning of Barbara Worth' (1926) turned out to be one of the many forgotten gems from the silent era—pictures never get included in the list of timeless classics or studied in film class, but which nevertheless achieve excellence on their own terms and hold up very well when screened today.

Well, you have a chance to discover this great flick this week. I'll be accompanying a screening of it on Thursday, June 9 at the Flying Monkey Moviehouse and Performance Center in Plymouth, N.H.

Showtime is 6:30 p.m. More details about the film and the screening are in the press release below this.

After that, it's two "unforgotten" gems. 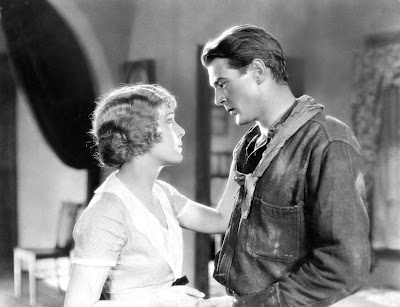 Rip-roaring epic silent Western to be shown at Flying Monkey on Thursday, June 9

'The Winning of Barbara Worth,' starring Ronald Colman and Gary Cooper, to be screened with live music in Plymouth, N.H.

PLYMOUTH, N.H.—A film that helped set the stage for Hollywood's love affair with the American West will be shown next month at The Flying Monkey Moviehouse and Performance Center.

Will the local ranch-hand prevail over the city slicker engineer? Can citizens of the parched region prevail over nature and transform their lands into an agricultural paradise? Will rumors of shortcuts taken in constructing a massive dam lead to disaster?

"What I try to do," Rapsis said, "is create a score that bridges the gap between a film that might be 80 or 90 years old, and the musical expectations of today's audiences."

'The Winning of Barbara Worth' is the latest in a monthly series of silent films presented with live music at the Flying Monkey. The series provides local audiences the opportunity to experience silent film as it was intended to be shown: on the big screen, in good-looking prints, with live music, and with an audience.

"If you can put pieces of the experience back together again, it's surprising how these films snap back to life," Rapsis said. "By showing the films under the right conditions, you can get a sense of why people first fell in love with the movies."

'The Winning of Barbara Worth' (1926) will be screened with live music on Thursday, June 9 at 6:30 p.m. at the Flying Monkey Moviehouse and Performance Center, 39 South Main St., Plymouth, N.H. Admission is $10 per person. For more info, call (603) 536-2551 or visit www.flyingmonkeynh.com. For more info on the music, visit www.jeffrapsis.com.