Next up: 'Flesh and the Devil' in 35mm
on Sunday, June 5 at Somerville Theatre 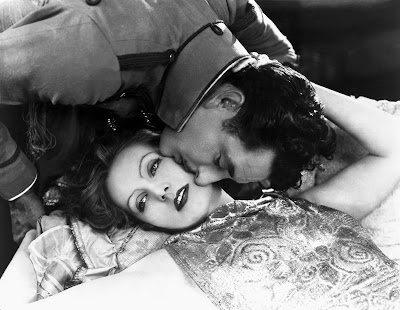 Greta Garbo and John Gilbert get close in 'Flesh and the Devil.'

But first: this morning (Friday, June 3) saw one of my favorite events on the calendar.

Each year about this time, I haul myself out to the Antrim (N.H.) Town Hall and do a silent film program for maybe 80 kids from Great Brook Middle School.

It's set up as a "reward" for the good work that students do year round.

So on movie day, they march down the hill from the school and then climb up the bell tower stairs and into the second-floor auditorium.

This morning it was Buster Keaton: the short 'One Week' and then the full-length 'The Cameraman.' 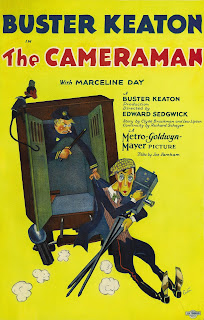 Why Buster? In the five or six years I've been doing this, we've tried other comedians. But for some reason the Great Brook Middle Schoolers have bonded with Buster.

About half the students on hand had attended in earlier years, and Mrs. Cullinan said it was pretty much unanimous: More Buster!

And the good news is that Buster can hold the attention of a room full of middle school students before 9 a.m. on a warm June morning.

Wow! I've taught middle school, and so let me tell you how impressive and amazing that is. Congrats, Buster!

What's more, they always come up with interested comments and questions.

This morning, before the screening I forgot to mention that there's footage of famous aviator Charles Lindbergh in 'The Cameraman,' just in case they didn't recognize him.

So afterwards, we asked: can anyone name who the guy in the parade waving to the crowd?

Not a bad guess—after all, it was a younger guy waving from a limo in old film footage.

Thanks to Maryanne Cullinan and the other faculty and staff from Great Brook for keeping this program going. You're the best!

And the kids—always a great audience. Thanks for the opportunity to get together each year and bring Buster's films to life.

Okay, and now for completely different.

No, not Monty Python. It's Greta Garbo and John Gilbert in 'Flesh and the Devil' (1926), which I'm accompanying on Sunday, June 5 at 2 p.m. at the Somerville Theatre. 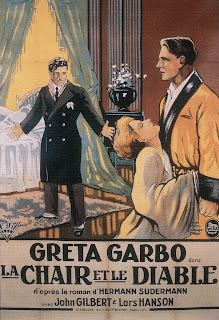 But I'm told the 35mm print is complete and looks pretty good. Also, in case anyone's wondering, it has the "traditional" ending, not the "happy" ending that MGM allegedly filmed to make the film more commercial.

I've never seen the alternate ending, but I asked to have the print looked at just to be prepared in case it had it.

Well, it doesn't. But it has everything else you'd want in this kind of picture: exotic settings, some light comedy, great atmosphere, and acres and acres of Garbo and Gilbert in close-up.

See you there! Bring tissues! 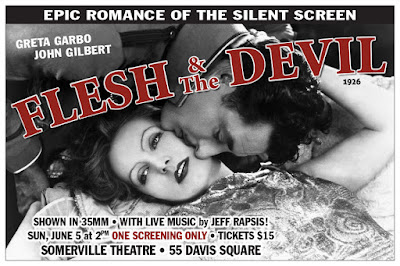 Garbo, Gilbert heat up the big screen in 'Flesh and the Devil' at Somerville Theatre

Celebrity couple fell passionately in love during filming of legendary silent classic, to be shown in 35mm and with live music on Sunday, June 5

SOMERVILLE, Mass. - Rediscover the passionate romance between early superstars Greta Garbo and John Gilbert in 'Flesh and the Devil' (1926), the classic MGM silent melodrama that first brought the legendary Hollywood couple together.

'Flesh and the Devil' will be shown on Sunday, June 5 at 2 p.m. at the Somerville Theatre, 55 Davis Square, Somerville, Mass. Admission is $15 per person or $12 seniors/students.

The film will be shown using a 35mm print. Live music will be provided by Jeff Rapsis, a New Hampshire-based silent film accompanist.

Set in Germany, 'Flesh and the Devil' tells the story of a love triangle between two boyhood friends (Gilbert and Lars Hansen) and the amoral seductress (Garbo) who comes between them.

The two men are eventually forced into a violent struggle over the woman, who marries one but carries on an affair with the other. 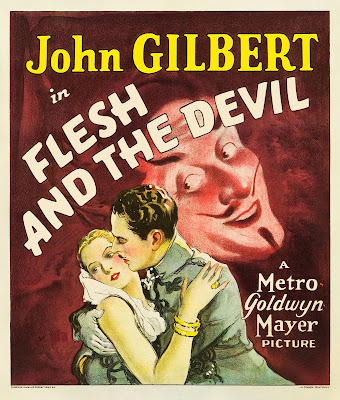 During the shooting, Garbo and Gilbert developed their own highly charged off-screen romantic affair, the passion of which director Clarence Brown delighted in capturing on camera.

Though Garbo and Gilbert eventually went their separate ways, 'Flesh and the Devil' marked the very public beginning of of one of the legendary romances of early Hollywood. 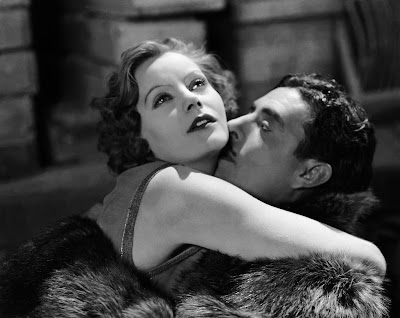 'Flesh and the Devil' is the latest installment of 'Silents, Please!'. a monthly series silent film screenings at the Somerville Theatre. The series aims to recreate the lost magic of early cinema by bringing crucial elements needed for silent film to work: classic films in best available 35mm prints; projection on the big screen; live musical accompaniment; and a live audience.

"These films are still moving and intense experiences if you can show them as they were designed to be screened," said Jeff Rapsis, who provides musical accompaniment for the screenings. "There's a reason people first fell in love with the movies. At their best, they were communal experiences in which the presence of a large audience intensifies everyone's reactions."

The appeal of 'Flesh and the Devil' has withstood the test of time. In 2006, the film was selected for preservation in the United States National Film Registry by the Library of Congress as being "culturally, historically, or aesthetically significant."

Reviewers have continued to praise the picture's many good qualities, often singling out Garbo's performance as particularly memorable.

Upcoming screenings in the Somerville Theatre's 'Silents Please!' series include:

• Sunday, Aug. 14: 'Stella Maris' (1924) starring Mary Pickford. A beautiful but disabled girl, cared for by a rich family that shields her from the world's harsh realities falls in love with a married man.

'Flesh and the Devil' will be shown in 35mm and with live music on Sunday, June 5 at 2 p.m. at the Somerville Theatre, 55 Davis Square, Somerville, Mass. Admission to the screening is $15 or $12 seniors/students. For more info, call (617) 625-5700 or visit www.somervilletheatreonline.com. For more info on the music, visit www.jeffrapsis.com.