Set sail for a sea of laughter with Harold Lloyd
on Thursday, July 7 at the Leavitt Theatre 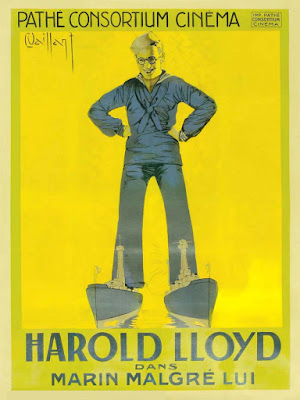 A French poster for Harold Lloyd's famous comedy...well, 'Despite Her Sailor,' according to Google translate.

With the Atlantic Ocean just a short stroll from the theater, what better venue to show Harold Lloyd's fun 1921 comedy 'A Sailor-Made Man'?

So that's just what we'll do. On Thursday, July 7, please join me for a silent film comedy program at the Leavitt Theatre in Ogunquit, Maine that features Lloyd's sea-faring comedy.

Several surprise short subjects will round out the bill, with live music by yours truly.

The weather today is just too nice to keep typing, so hope you don't mind if I hit 'Publish' without going any further.

I will, however, paste in the text of the press release that went out for this screening. Hope to see you there! 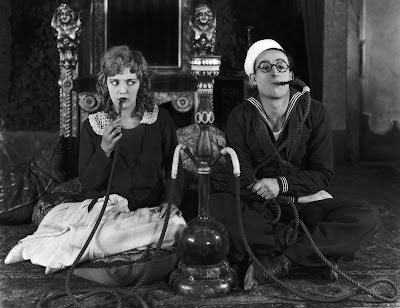 Lloyd and spouse-to-be Mildred Davis smoke up some comedy in 'A Sailor-Made Man.'

'A Sailor-Made Man' (1921), other vintage classics to be screened with live music at historic Ogunquit venue

OGUNQUIT, Me.—He was the boy next door who yearned to make good, but instead had a knack for getting into spectacular trouble.

He was Harold Lloyd, whose upbeat and fast-paced comedies never failed to convulse audiences, making him the most popular movie star of Hollywood's silent film era.

See for yourself why Lloyd was the top box office attraction of the 1920s in a program featuring some of his best comedies, including 'A Sailor-Made Man' (1921), all shown with live music.

A program of Silent Comedy with Harold Lloyd will be shown on Thursday, July 7 at 8 p.m. at the historic Leavitt Theatre, 259 Main St. in downtown Ogunquit.

Admission is $10 per person, general admission.

Live music will be provided by accompanist Jeff Rapsis, a New England-based composer who specializes in creating music for silent film presentations.

"There's nothing like silent film comedy shown on the big screen with a live audience," said Rapsis, who regularly accompanies silent film screenings around the region.

Lloyd's optimistic go-getter character was extremely popular throughout the 1920s, as audiences eagerly followed him from one adventure to the next. His pictures mixed comedy, sentiment, and thrills in a winning combination that has stood the test of time. 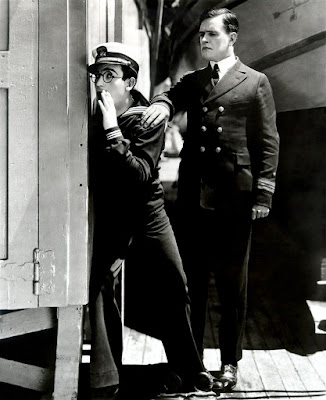 In 'A Sailor-Made Man,' Harold plays a wealthy young man who signs up for the U.S. Navy to prove himself worthy of the girl he loves. The Navy proves less than a picnic, until Harold gets an opportunity to save his girl when she gets kidnapped. Harold races to the rescue in classic silent comedy style!

The evening-long program at the Leavitt will be rounded out with other Harold Lloyd titles.

The Harold Lloyd program continues another season of silent films presented with live music at the Leavitt. The series provides local audiences the opportunity to experience silent film as it was intended to be shown: on the big screen, in good-looking prints, with live music, and with an audience.

Comedy programs have been especially popular with audiences at the Leavitt. In addition to Lloyd, other silent film comedians highlighted in this season's series are Charlie Chaplin and Harry Langdon.

• Saturday, Oct. 29 at 8 p.m.: 'The Man Who Laughs' (1928); celebrate Halloween with this creepy but riveting historical tale about a man forced to go through life with a maniacal grin.