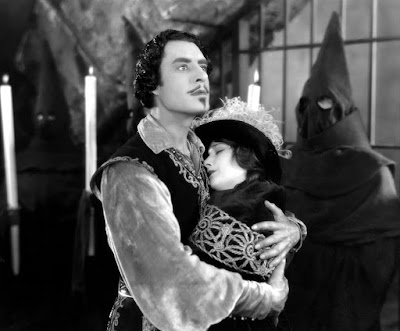 John Gilbert and Eleanor Boardman in the formerly lost film 'Bardelys the Magnificent' (1926). No, the candle is not part of Boardman's hat.

About 11,000 feature films were produced in the U.S. during the silent era. Of those, about 8,500 are now lost, meaning no copies are known to exist anywhere.

Wow! But the good news is that films thought to be lost are still being found, even at this late date.

We'll be running one of the most prominent "unlost" films, the MGM historical romance 'Bardelys the Magnificent' (1926), on Friday, July 15 at Red River Theatres in Concord, N.H.

Showtime is 7 p.m. and there's more info in the attached press release.

Set in the France of King Louis XIII, it's a big-budget swashbuckling adventure film with an impressive pedigree: directed by King Vidor, and starring John Gilbert (MGM's top star at the time) and Eleanor Boardman, an actress who was Vidor's wife.

And in this case, it really shouldn't have been lost, because MGM generally took care of its back catalog of prints.

While other studios routinely junked release prints to recover the silver content, or just neglected films that had finished their theatrical runs, MGM from the beginning made an effort to maintain its "vault."

So what happened? In the case of 'Bardelys,' the film was based on a novel by Rafael Sabatini. When MGM's licensing deal with Sabatini expired in 1936, the studio opted not to renew.

As part of the deal, it was obligated to destroy the film's negative as well as all positive prints, which it did.

And that was that! Business is business.

Later, when people got interested in silent cinema, no copies of 'Bardelys' could be found anywhere. 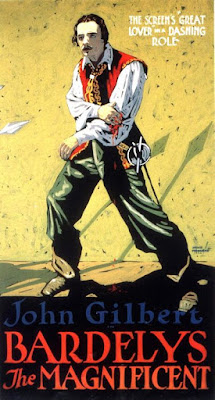 So for decades, it was considered a lost film. All we had was the film's 'Coming Attractions' trailer, as well as a brief but tantalizing sequence that was used in a later MGM film directed by Vidor, 'Show People' (1928). And posters like the one at left.

But then, as sometimes happens, a nearly complete copy of the European version of 'Bardelys' was found in France in 2006. It had French intertitles and was missing most of Reel 3, but otherwise was intact and in pretty good shape.

Using MGM records, the original English titles were recreated, and the missing footage of Reel 3 was recreated using material from the trailer as well as still photographs and explanatory titles.

And behold: 'Bardelys the Magnificent' was "unlost," and able to be seen for the first time since its original 1926 release.

I first encountered the film at the Kansas Silent Film Festival a few years ago, with live music by the wonderful Mont Alto Motion Picture Orchestra.

It plays very well, and is an important missing link in the silent film catalog.

And it's also a perfect summertime escapist film, which is why we're running it at Red River—a day after Bastille Day, I might add.

But no lost silent film is truly "unlost" unless it's screened as intended: in a theater, with live music, and with an audience.

And that's where you come in. Hope you can join us and help conjure up the excitement and adventure of early Hollywood as we screen 'Bardelys the Magnificent' at Red River Theatres! 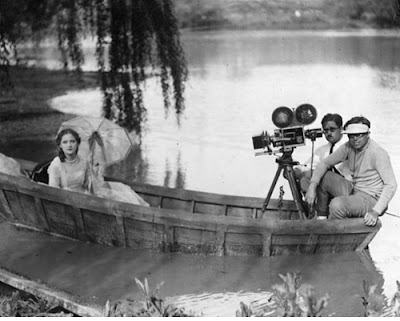 Before it got lost, it had to get made: shooting 'Bardelys the Magnificent' with Eleanor Boardman, cameraman William Daniels, and director King Vidor.

'Bardelys the Magnificent' (1926), epic long thought lost until a copy was found in Europe, to be screened with live music

CONCORD, N.H.—A major Hollywood feature—a film lost for decades until a copy surfaced in France in 2006—will soon get its local big screen "re-premier."

Based on a novel by prolific Italian/English author Rafael Sabatini, 'Bardelys the Magnificent' is an epic tale of love, honor, and derring-do set during the reign of King Louis XIII of France.

The story follows the adventures of French nobleman Bardelys, who assumes the identity of a dead man to be close to the woman he loves. The ruse backfires, however, when it turns out the dead man is wanted for treason against the King.

This propels Bardelys into a series of swashbuckling adventures as he must avoid being caught and executed, all the while pursuing his beloved.

The title role is played by legendary leading man John Gilbert, then at the height of his 1920s stardom. Gilbert was popular for his good looks, magnetic personality, and athletic stunts. Actress Eleanor Boardman plays Roxalanne, his love interest; the huge cast includes many silent film-era stars and supporting players.

The picture was a solid hit in its original release, enhancing the reputations of everyone involved. Later, MGM's rights to the Sabatini novel expired in 1936, and the studio destroyed all copies per the licensing agreement. It was only later that archivists released that no other copies of the film were known to have survived anywhere.

For six decades, the only footage of 'Bardelys the Magnificent' known to exist was a brief clip included in a movie theater scene in 'Show People,' another Vidor picture. 'Bardelys' was regarded as a major lost feature film from the silent era.

Then, in 2006, researchers in France discovered an almost complete copy of 'Bardelys the Magnificent' in a private collection. The print was missing about 10 minutes of footage, but was otherwise intact and in excellent condition.

The missing footage is replaced with still photos taken on the set, written descriptions, and by scenes recovered from a 'Coming attractions' trailer for the film. The story is now easily followed.

Restoration was completed in 2008; the film was subsequently released on DVD, and has since been screened at several festivals around the country—but not not in Concord until now.

"With it being the day after Bastille Day, we thought it would be a great time to screen this historical romance set in France," Rapsis said. 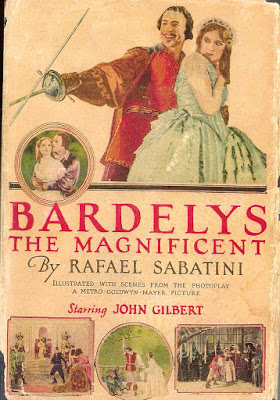 ...and before it got made into a "photoplay" (meaning movie), it was a novel by Rafael Sabatini.

Silent films were produced until 1929, when talkies arrived. About 75 percent of all movies made during the silent era are now lost due to decomposition, carelessness, fire, or neglect. But copies of "missing" films still occasionally turn up in archives and collections around the world, so researchers and archivists continue to make discoveries.

'Bardelys the Magnificent' is the latest in a monthly series of silent films presented with live music at Red River Theatres. The series provides local audiences the opportunity to experience silent film as it was intended to be shown: on the big screen, in good-looking prints, with live music, and with an audience.

"If you can put Humpty Dumpty back together again, it's surprising how these films jump back to life," Rapsis said. "By showing the films under the right conditions, you can really get a sense of why people first fell in love with the movies."

• Friday, Oct. 14: 'The Cat and the Canary' (1927). Creepy haunted house thriller set the stage for great Universal classics such as 'Dracula' and 'The Mummy.'