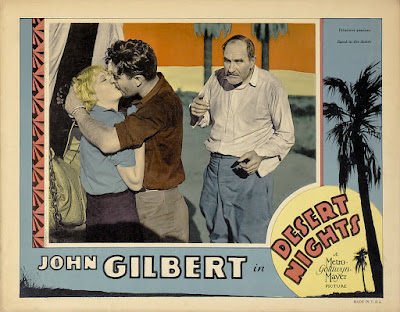 I've seen it happen again and again: a silent film that I've looked at by myself at home comes across as a real yawner, a tiresome dud.

But the same film, when screened in a theater, with live music and with an audience, snaps back to life and commands the screen!

I've found this occurs not just with well-known classics, but with obscure films that just never get shown.

Exhibit them as intended, and the whole experience comes together. The film somehow works.

This isn't always the case, of course. Truth is, you never know what kind of reaction an older film will inspire.

The only real way to know for sure is to get the film up on a screen and give it a chance with live music and with an audience.

That's what we've been doing at the Manchester (N.H.) City Library once a month for some years now.

Each month, I run an obscure film, usually one I've never accompanied before. Could be a drama, comedy, western, adventure—anything.

And together, we collaborate to find out if the film really has anything going for it.

It's kind of a laboratory for testing how much power remains in the batteries of these old flicks.

And there are a lot of films that survive. For every well-known silent such as 'Metropolis' or 'The General,' there are literally hundreds of other lesser-known flicks.

Overall, it's estimated that about 11,000 feature-length films were produced in the U.S. during the silent era.

Of those about 70 percent have been completely lost due to neglect, decay, and so on.

But that leaves something like 3,000 films out there, each potentially full of great artistic or cultural and entertainment value. Sometimes all three!

Over the years, our efforts have produced some surprise discoveries. Films that never get shown can still spring right back to life if shown as intended.

We're on break this month, but we pick things up in August, and I hope you'll join us.

Together, we give forgotten films a chance to do what they were designed to do so long ago: to transport us, to entertain us, to inspire us.

Can they? Will they? Only one way to find out.

Below is a press release announcing the titles from now through the end of the year. See you at the library!

Yes, I know we misspelled "Desert" in this promotional ad for the silent film series at the Manchester (N.H.) City Library.

MANCHESTER, N.H. — The films may be silent. But the experience of seeing them is anything but.

That's because live music is always part of the show at the Manchester City Library's ongoing silent film series. And so is audience reaction.

The silent film programs are free and take place in the basement auditorium of the Manchester City Library, which is located at 405 Pine St. in downtown Manchester.

The schedule for the rest of 2016, just released, includes a ground-breaking drama from acclaimed German director F.W. Murnau, a rarely-screened Lon Chaney feature, and action flicks featuring firemen, the U.S. Coast Guard, and a woman who transforms herself into a leopard.

Each month, the library runs a classic film from the time before movies came with synchronized sound and dialogue.

Instead, filmmakers told their stories visually, with live music creating a unique atmosphere when the movie is shown in a theater.

"These are the films that caused people to first fall in love with the movies," said Jeff Rapsis, a New Hampshire-based silent film accompanist who creates and performs live music for the library's series.

"At the time they were new, nobody thought of them as silent," Rapsis said. "They were pictures that moved, a brand new art form. And the stories they told had a universal appeal that captured the public's imagination all over the globe."

The films are popular with audiences of all ages, from children to senior citizens.

All screenings in the series take place in Carpenter Auditorium, located on the lower level of the historic Manchester City Library building.

Shows in the series are free and open to the public. Screenings take place on Tuesday nights and begin at 6 p.m.

• Tuesday, Aug. 9 at 6 p.m.: "Desert Nights" (1929) starring John Gilbert, Ernest Torrence. A thieving couple victimize a diamond mine and kidnap its manager, but he gains the upper hand (and falls in love with the woman) when they flee into the hostile desert. Superstar Gilbert's final silent film, climaxed by an immense sandstorm.

• Tuesday, Sept. 6 at 6 p.m.: "The Last Laugh" (1924) starring Emil Jannings, directed by F.W. Murnau. Engrossing character study of what happens when the head doorman at a posh Berlin hotel is ordered to give up his uniform due to encroaching old age. German film full of iconic images that stretched the expressive power of cinema.

• Tuesday, Oct. 4 at 6 p.m.: "The Leopard Woman" (1920). Battle-of-wits jungle drama about an British explorer and a female spy from a rival goverment ordered to foil his mission. The fun begins when rather than killing the explorer, she falls in love with him―and then he goes blind!

• Tuesday, Nov. 1 at 6 p.m.: "The Third Alarm" (1922) and "The Coast Patrol" (1925). Fire and water mix in a double bill of classic low-budget melodramas, one about a firefighter forced to retire when the department switches from horses to motorized vehicles, and another about smugglers who threaten a lighthouse keeper's peaceful post.

In addition to telling good stories and having entertainment value, these films are also of interest for what they show about daily life in the time they were made.

"Over the years, films from the silent era have picked up additional interest as a record of a way of life that's quite different from today," Rapsis said.

"Doing the music live is a bit of a high-wire act," Rapsis said. "But I find it's the best way to create music that reflects what's happening on screen and helps an audience connect and stay with a film."

The program takes place in the Carpenter Auditorium, lower level of Manchester City Library, 405 Pine St., downtown Manchester. Admission is free and the program is open to the public.

For more about the music, visit www.jeffrapsis.com.