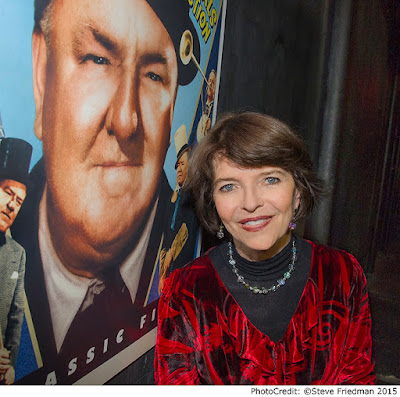 One of the perks of doing silent film music is that you occasionally get to rub elbows with descendants of the on-screen luminaries.

Yes, the stars themselves may be gone, but their families are with us—living links of a sort to the vanished era of movies without soundtracks.

Many take an active role in tending the legacy of their famous fore-bearers, the family of W.C. Fields being one of the best examples.

The four Fields grandchildren collectively manage W.C. Fields Productions, Inc., and they continue to cultivate interest in their grandfather's long and storied career.

Part of that legacy was the substantial amount of work Field did during the silent film era. Few people realize it today because his later "talkie" appearances are what ensured his immortality.

But the silent films hold up well, and I'm pleased to say they'll be front and center of a program we're running at the Somerville Theatre on Sunday, July 10.

And I'm ever more pleased to say our special guest will be Dr. Harriet Fields, the only granddaughter of W.C., who will be on hand to speak of her granddad's achievements and answer questions.

The program is highlighted by pristine 35mm prints (from the Library of Congress) of two of the best Fields silents: 'So's Your Old Man' and 'It's the Old Army Game,' both from 1926.

But, courtesy the detective work of master projectionist David Kornfeld, we also have prints of Fields' first-ever movie appearance in 'Pool Sharks' (1915) as well as other goodies.

It promises to be a memorable program. And the lousy weekend forecast (rainy and damp) in these parts bodes well for attendance.

So I hope you can join the Field-centric fun, which starts at 2 p.m. on Sunday, July 10 at the Somerville Theatre. More info in the press release below. 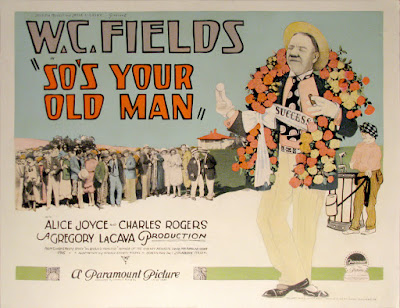 • Program on Sunday, July 10 hosted by Dr. Harriet Fields, comedian's granddaughter and advocate for his work

SOMERVILLE, Mass.—He was a performer who could be recognized by just the nasal twang of his voice.

But prior to reaching iconic fame in talking pictures, W.C. Fields starred successfully in a popular series of silent feature films for Paramount Pictures and other studios in the 1920s.

Both films will be screened using 35mm prints from the U.S. Library of Congress. General admission to the double feature is $15 per person.

Special guest for the event will be Dr. Harriet A. Fields, granddaughter of W.C. Fields. Dr. Fields, a longtime advocate of her grandfather's work, will share stories of her family and answer questions about W.C. Fields, his achievements, and his films.

Live musical scoring for the movies will be provided by silent film accompanist Jeff Rapsis.

W.C. Fields remains famous today for his comic persona as a misanthropic and hard-drinking egotist with a snarling contempt for dogs, children and women.

Although Fields achieved lasting fame as a movie star in talking pictures of the 1930s, his long career encompassed decades on the vaudeville stage as well as a series of silent film roles in the 1920s. 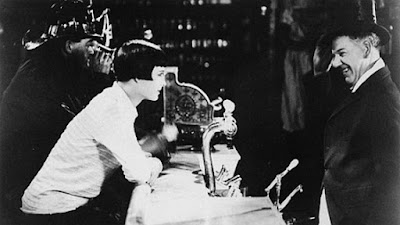 W.C. Fields co-starred with a young Louise Brooks in 'It's the Old Army Game.'

"People find it hard to think of W.C. Fields in silent films, but he was actually quite successful," Rapsis said. "As a vaudeville performer and juggler, Fields cultivated a form of visual comedy and pantomime that transferred well to the silent screen.

"Also, as a middle-aged man during the silent film era, he was able to play a family father figure—the kind of role that wasn't open to younger comic stars such as Charlie Chaplin or Buster Keaton," Rapsis said.

In all, Fields starred in 10 silent features in the mid-1920s. Several are lost; in those that survive, Fields sports a thick mustache, part of his vaudeville costume as a "vagabond juggler" which he dropped in later years.

The Fields double feature is the latest installment of the Somerville Theatre's monthly "Silents, Please!" series, designed to showcase the silent era's best feature films the way they were intended to be shown—using actual 35mm film prints projected on the big screen, with live music, and with an audience.

"If you can put all these elements together, the films come to life in a way that's surprising to modern audiences," said Ian Judge, the Somerville's general manager. "Our silent film series has been very successful at attracting an audience, we're thrilled to continue it on a monthly basis."

In 'So's Your Old Man' (1926), Fields plays Sam Bisbee, inventor of a new shatter-proof windshield glass and regarded as a crackpot by the townsfolk. After a demonstration of his glass to auto executives goes awry, he faces ridicule and shame. On the way home, Bisbee encounters a woman he thinks is trying to commit suicide, and so prevents her.

The woman is really Princess Lescaboura, member of a family of European royalty, who later arrives in Bisbee's home town to thank him, upending Bisbee's life and setting the small town aflame with gossip. The film includes a version of Fields' famous "golf" routine. 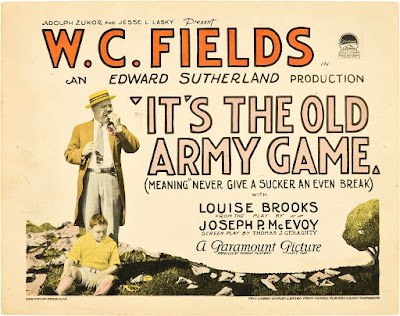 A lobby card for 'It's the Old Army Game.'

In 'It's The Old Army Game' (1926), Fields portrays Elmer Prettywillie, a small-town pharmacist beset with large-scale frustrations—his nagging sister and her brat of a kid; annoying customers; self-centered, middle-aged women; and uncooperative inanimate objects of all kinds.

Prettywillie’s lovely shop assistant (legendary silent beauty Louise Brooks) gets the harried shopkeeper even further over his head, when she encourages him to take part in a land-selling scheme being promoted by a slick salesman (George Parker).

The druggist helps the salesman make a heap of cash, selling his parcels of land; but when a detective hauls the salesman out of town, it’s Elmer who is left holding the bag.

The result is a timeless domestic farce that foreshadows Fields' later talking films and continues to delight audiences when screened as intended: in a theater, with live music and an audience.

Both features were made not in Hollywood, but at the Paramount studios in Astoria, Queens, a popular production facility for New York-based stage performers who also appeared in film.

Fields appears as an even younger man in 'Pool Sharks' (1915), a short comedy also on the program. The film marks the first appearance of Fields on screen, and will be included as a bonus extra in the Somerville's program.

The program will also include rare 35mm prints of several Fields short subjects with synchronized sound. 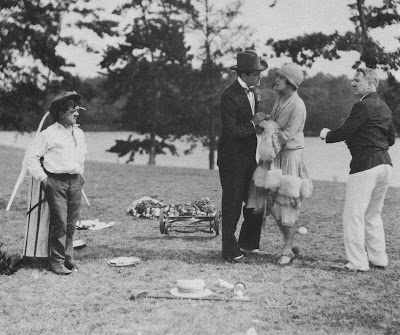 Fields (at left) during the golf routine that concludes 'So's Your Old Man.'

For the silent films, Rapsis improvises the music in real time, while the film is running, using a synthesizer that allow him to recreate the "movie score" texture of a full orchestra.

"Improvising a score live is a bit of a high-wire act, but it allows me to follow and support the film a lot more effectively than if I was buried in sheet music," Rapsis said. "Instead, I'm free to follow the film right in the moment. Each time it's different, which lends a certain energy and immediacy and excitement to the experience."

A W.C. Fields silent double feature, with special guest Dr. Harriet A. Fields, will be screened in 35mm with live music on Sunday, July 10 at 2 p.m. at the Somerville Theater, 55 Davis Square, Somerville, Mass. Admission is $15 adults, $12 students/seniors; general admission seating. For more information, call (617) 625-5700 or visit http://www.somervilletheatreonline.com. For more info on the music, visit www.jeffrapsis.com.