Today: Music for 'Zorro' in 35mm at the
Somerville—but how much of this is Batman? 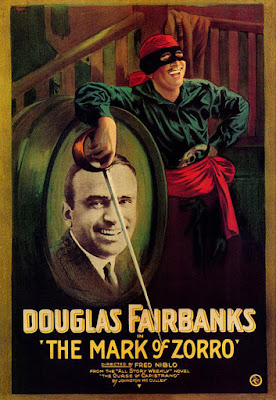 Today at 2 p.m., I'll be accompanying a screening of 'The Mark of Zorro' (1920) at the Somerville Theatre in Davis Square, Somerville, Mass.

It's a terrific movie, highlighted by the visible on-screen joy of Douglas Fairbanks Sr. discovering the swashbuckling formula that would carry him through epic adventures for the rest of the silent era.

And the film is actual film, in the form of a great 35mm print from the Museum of Modern Art. It's a rainy Sunday, so hope you can join us!

For all the details, check out the press release I've pasted in below.

But there's one aspect of 'Zorro' that I would like to know more about. Perhaps you can help.

Do you know the back story of 'Batman'?

I know it includes a Bruce Wayne as a very young boy vowing to become a crime-fighter after witnessing the murder of his parents outside a Gotham City movie theater.

And somewhere along the line, I read where the movie the family was attending that night was 'The Mask of Zorro.'

It made sense because that's how Wayne would have gotten the idea for the masked fighter of crime, and so many other Batman elements that are similar to Zorro.

It also made sense in terms of the timing: Bruce Wayne was born in 1915, which would make him just old enough to be present at 'Zorro,' and also to fuse the trauma of the murder with what he saw in the movie.

But I've just gone to look for more specifics about this, and couldn't find anything online. Well, except for this page from "Batman 459" 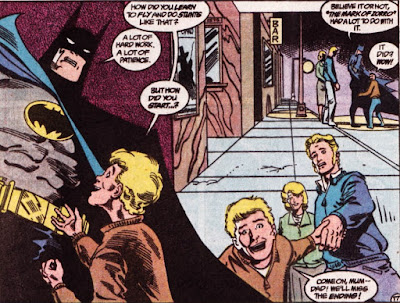 Maybe it's just because there's so much material out there about Batman, this part of the story has just been buried under the avalanche of pop culture.

It seems that whatever the Batman backstory was, it was filled in much later.

And if Bruce Wayne was inspired by Zorro, there's some confusion over whether the 'Zorro' connection is between the silent version or with the 1940 remake starring Tyrone Power.

So if anyone knows anything about this backstory, such as when it appeared or even if it's true or not true, that would be great!

For a long time now, I've pointed to the 'Zorro' and 'Batman' connection as a great example about how the DNA of early cinema is part of today's visually oriented culture.

Well, if I'm going keep making the case in this way, it's about time I knew what I was talking about, right?

So if any Batman experts are out there, let me know what the real story is. Send me a note at jeffrapsis@gmail.com.

For now, I hope you'll be able to join us for Douglas Fairbanks Sr. in 'Zorro,' who I still think of as the original Batman.

Here's the press release with all the details! 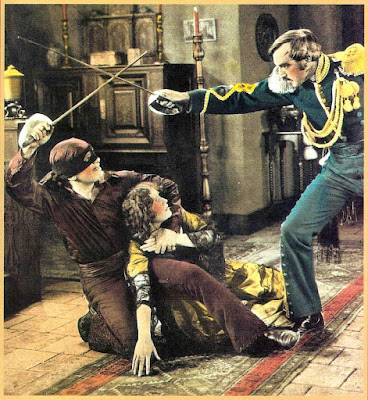 Original 'Zorro' to screen in 35mm at Somerville Theatre on Sunday, Oct. 2

Prepare to buckle your swash: Silent adventure epic starring Douglas Fairbanks Sr. to be shown on the big screen with live music

'The Mark of Zorro' (1920) will once again fill the silver screen, accompanied by live music on Sunday, Oct. 2 at 2 p.m. at the Somerville Theater, 55 Davis Square, Somerville.

The film will be screened using a 35mm print. General admission to the program is $15 per person/$12 student and seniors.

The screening, the latest in the Somerville's "Silents, Please!" series, will feature live accompaniment by Jeff Rapsis, a New Hampshire-based composer who specializes in creating scores for silent films. Admission is free and open to the public.

'The Mark of Zorro,' a major hit when first released, tells the story of young Don Diego Vega, the son of a wealthy ranch owner in Spanish California of the early 19th century.

The film stars Douglas Fairbanks Sr., who until 'Zorro' had focused on playing traditional all-American leading roles in romantic comedies. 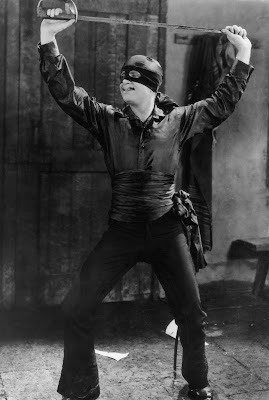 The original 'Zorro' film was so popular it inspired one of Hollywood's first big-budget sequels, 'Don Q, Son of Zorro' (1925), also starring Fairbanks.

Fairbanks, one of the silent screen's most popular leading men, was the inspiration of the character George Valentin in 'The Artist,' the recent Oscar-winning Best Picture.

Critics have praised 'The Mark of Zorro' for its tight story, fast pace, and exciting action sequences, which include many stunts performed by Fairbanks himself. Steven D. Greydanus of the Decent Films Guide wrote that the silent Zorro "...contains some of the most jaw-dropping stunts I’ve ever seen this side of Jackie Chan."

This genre-defining swashbuckler was the first movie version of the Zorro legend. The story has since been remade and adapted many times, most recently in 1998 as 'The Mask of Zorro' starring Anthony Hopkins and Antonio Banderas.

'The Mark of Zorro' was the first film released by the newly formed United Artists studio, formed in 1920 by Fairbanks with fellow silent film superstars Mary Pickford, Charlie Chaplin, and director D.W. Griffith.

The silent version of 'Zorro' also played a key role in the formation of the DC Comics Batman character; in the original 1939 story, a young Bruce Wayne sees 'Zorro' on the same night that his parents are later murdered, which leads him to adopt Zorro's mask and cape as a basis for his own transformation into 'Batman.'

The screening will be accompanied by improvisation-based musical score created live by New Hampshire silent film accompanist Jeff Rapsis. Rapsis achieves a traditional "movie score" sound for silent film screenings by using a digital synthesizer to reproduce the texture of the full orchestra.

'The Mark of Zorro' will be screened in 35mm with live music on Sunday, Oct 2 at 2 p.m. at the Somerville Theater, 55 Davis Square, Somerville, Mass. Admission is $15 adults, $12 students/seniors; general admission seating. For more information, call (617) 625-5700 or visit www.somervilletheatre.com. For more info on the music, visit www.jeffrapsis.com.