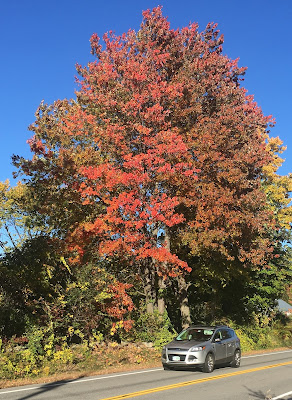 From today: Good color coming in this year across the road from our house.

And it's peak foliage right now in northern New England: a little late due to lack of rain this summer, but coming in nicely nonetheless.

I had to drive through rural Brookline and Hollis, N.H. on Thursday, and even on a cloudy day the colors are amazing.

So it's a great weekend to go bombing around the New England countryside on a mini-tour that takes me to an evening show in Brandon, Vt. on Saturday; a Sunday afternoon show in Charlestown, N.H., and then an evening performance down in Boston at the Somerville Theatre.

Because of the distance involved, I get to stay overnight in Rutland, Vt. I tell ya, this showbiz thing is just endless glam.

In Brandon, it's 'Chiller Theatre,' so dubbed because when we started showing films as late as October, the Town Hall did not have central heating.

It now does, but they've kept the name. The film is 'The Man Who Laughs' (1928), the amazing Paul Leni film starring Conrad Veidt in the title role. 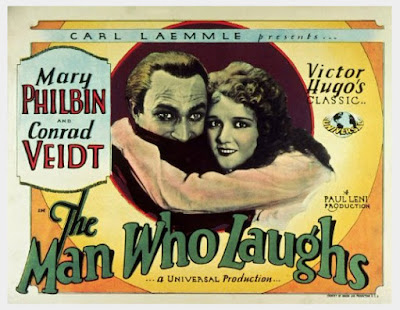 Original promotional art for 'The Man Who Laughs.'

It's our final screening of the season in Brandon, where turnout has been strong all year. We've had some good publicity in local press, so here's hoping for a really big crowd for our last hurrah.

More details of the screening are in the press release posted below.

Sunday afternoon takes me to Charlestown, N.H., where the local historical society is screening a Lon Chaney double feature: 'The Unknown' (1927) followed by 'The Phantom of the Opera' (1925).

Showtime is 2 p.m. at the "Old Town Hall," a building whose many functions over the years have included a stint as the town movie theatre.

I always enjoy visiting Charlestown, as I covered the town for a time as a reporter for the Eagle-Times daily newspaper, based up the Connecticut River in Claremont, N.H.

To me, it was a sort of Granite State version of Lake Wobegon. The local grocery store was (and still is) actually named Ralph's, just as in Garrison Keillor's fictional town.

And the place was (and yes, still is) filled with memorable characters.

North Charlestown in home to the St. Pierre clan, an enormous family that runs a huge sand and gravel business. I got to know some of the brothers well enough to be invited to the annual family picnic, where one of the traditions was for everyone to gather on a flatbed and then have it hauled onto the truck scale to get the collective family weight!

When I'm done in Charlestown, then I bomb down to the big city, Boston, where I'm accompanying Chaney again in 'The Unknown,' but this time it's a 35mm print.

The 8 p.m. screening is the finale of the theater's annual multi-day "Terrorthon" festival. It's always a highlight to accompany films at this grand old theater, which has been showing movies since 1914 and where they still take the trouble to show vintage film on actual film.

More details about the Sunday screenings can be found by clicking the "Upcoming Silent Film Screenings" link at the top right of this page.

A lull follows Sunday, but things pick up again next weekend and then I have screenings virtually every day through Halloween. Be prepared to get scared!

And of course, if the usual run-up to Halloween isn't scary enough, just turn on the news! Boo! 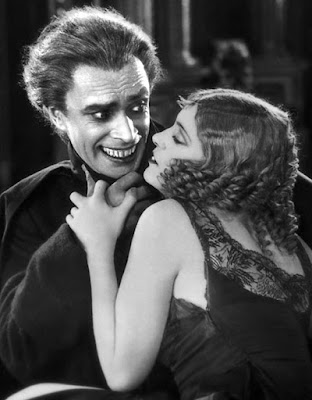 BRANDON, Vt.—'The Man Who Laughs' (1928), a silent drama featuring a disfigured man forced to wear an insane grin all his life, will be screened with live music on Saturday, Oct. 15 at 7 p.m. at Brandon Town Hall.

The film will be accompanied live by silent film musician Jeff Rapsis.

The screening is free and open to the public. Donations are accepted to help support the town hall's ongoing renovation and restoration. The screening is sponsored by Omya, Inc.

'The Man Who Laughs,' directed by Paul Leni and starring Conrad Veidt, was a popular silent film adaptation of a sprawling Victor Hugo novel set in 17th century England.

The pair are then adopted and put to work by a travelling impresario, who makes use of Gwynplaine's startling face in his theatrical productions.

'The Man Who Laughs' will be be screened with live music on Saturday, Oct. 15 at 7 p.m. at Brandon Town Hall and Community Center, Route 7, in Brandon, Vt.

Admission is free; free will donations are encouraged, with proceeds to support ongoing renovation of the town hall. For more information, visit www.brandontownhall.org. For more about the music, visit www.jeffrapsis.com.