Wrapping up a silent film Halloween...
...or are the scariest days yet to come? 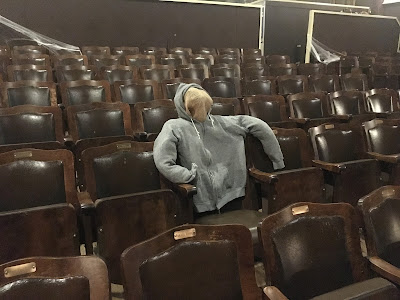 A pseudo-audience member awaits 'The Man Who Laughs' at the Leavitt Theatre.

For each of these shows, the music fell together a very satisfying way. I felt I was able to come up with suitably dramatic and/or spooky music when needed, but also stuff that allowed the humor in each film to come out.

Put another way: each of the films was able to breathe. 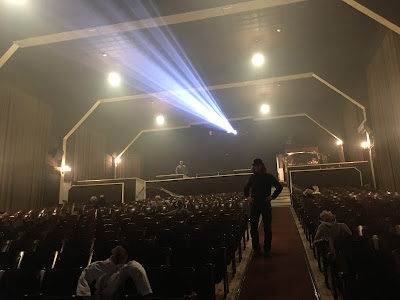 Pre-show prep at the Leavitt Theatre, with fog and fake attendees.

For 'Nosferatu,' it was the only time this year I played for this film, so it had a freshness and excitement that's sometimes difficult to manage when you've already accompanied a title, say, three times in two weeks.

I know the movie well enough, so I didn't even preview it prior to the screening, which drew a huge crowd to the Regent.

I actually did remember one thing about 'Nosferatu': that I need a musical signature for the images of a rooster crowing, which form an important part of the film's climax.

This time I remembered, and it all worked very effectively. But on the other hand, I muffed one of the two scenes where the clock is striking midnight.

The first time, it's pretty easy: the camera cuts to a clock, which is when I start the chimes: in my case, a small bellhop bell tapped steadily 12 time, if I count right.

But the second time (on the next night), the character of Hutter hears the chimes sounding, and reacts to them, before the scene cuts to the same clock, with the ringing in progress.

On Friday night, poor Hutter reacted quite visibly to chimes that couldn't be heard until the camera cut to them. Ooops!

The perils of trying to time sound effects to on-screen action. But afterwards, a guy said he thought I totally nailed it. So go figure!

The next night, the screening of 'The Man Who Laughs' up at the Leavitt Theatre in Ogunquit, Maine was memorable as much for the atmosphere as for the music. 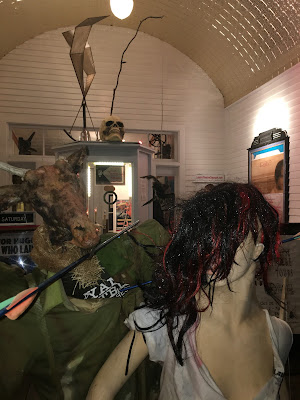 Patrons of the Leavitt Theatre had to negotiate this display outside the lobby.

As a gay-friendly seaside resort, Ogunquit doesn't hold back at Halloween. The costumes of people bar-hopping downtown are amazing: I saw several men dressed as Las Vegas chorus girls tottering

And at the Leavitt Theatre, the Clayton family had transformed their vintage building (opened in 1923), into a "haunted theater," filling the interior with cobwebs and stage fog.

During the day, visitors brave enough to enter were taken inside, where mannequins sat motionless in the chairs and spirits were liable to pop out from anywhere!

The tours continued past 7 p.m., and all the decorations were left in place, so the theater just sort of morphed into a movie theater at some point prior to our show, with me using a pipe organ patch to play spooky funeral parlor music on my keyboard. 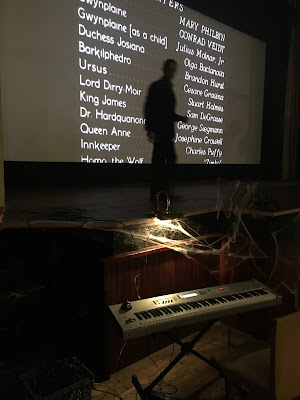 Ian Clayton of the Leavitt on stage above my cob-webby keyboard in the pit.

That night's screening of 'The Man Who Laughs' was the last of four I'd accompanied in the past two weeks. (Strangely, all four were in different stages: Maine, New Hampshire, Vermont, and Massachusetts!)

I had accumulated some good material, I thought, and so was able work it up into something pretty effective for Saturday's final go-round. Very gratifying to help this great film come to life and connect with audiences.

For 'Phantom of the Opera' on Sunday, I was able to once more use the opening line that I developed for this season's screenings: "Nothing is more appropriate for Halloween than a silent film because EVERYONE in this picture is DEAD!"

It produces laughs. What can I say?

Well, in Wilton, I said that until very recently, everyone in 'Phantom' was NOT dead. Carla Laemmle, niece of Universal Studios boss Carl Laemmle, danced in 'Phantom' as a teenager. And by God if she still wasn't with us all the way up until 2014, when she died at age 104.

This earned Carla a spontaneous round of applause! 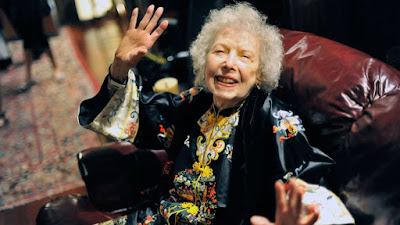 I also tried out the "audience participation" approach I've developed with Phantom screenings.

The Wilton crowd, one of the largest we've ever hosted, was into it: they applauded lustily during the on-screen opera house ovations, and shrieked pretty convincingly when the chandelier dropped and you-know-who got unmasked.

But not right away. Tomorrow night, I have a "fire and water" double feature at the Manchester (N.H.) City Library. The two flicks on the program are firefighting drama 'The Third Alarm' (1922) and Coast Guard adventure 'Coast Patrol' (1925).

And then I take a deep breath before tackling 'Wings' on Friday night for the Aviation Museum of N.H., which is screening the film as a benefit in their hanger on the grounds of Manchester-Boston Regional Airport. More on that in a follow-up post.

And then the next morning, I return to the same airport to fly out on my way to San Francisco, where that night I'm accompanying William S. Hart's very first film, 'The Bargain' (1914) at the wonderful Niles Essanay Silent Film Museum. 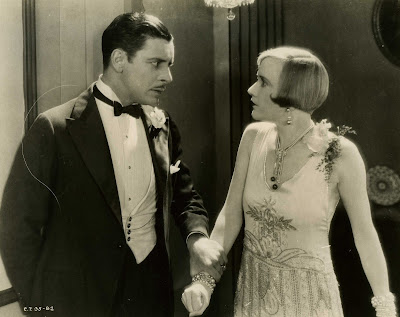 Ronald Colman matches wits with Constance Talmadge in 'Her Sister From Paris' (1925).

And then I'm doing 'Her Sister From Paris' (1925) on Thursday, Nov. 10 at the Flying Monkey Moviehouse and Performance Center in Plymouth, N.H. And then...

So what was I saying about slowing down?

Maybe I was mistaken. Maybe Halloween isn't really over yet.

After all, with the Presidential election just eight days away, perhaps the scariest times are yet to come!