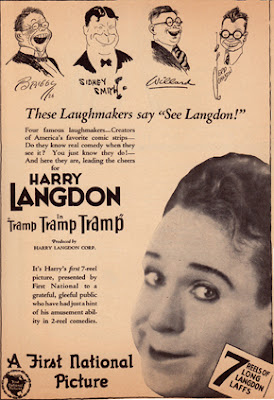 We enjoyed a big turnout at the Wilton (N.H.) Town Hall Theatre for the venue's final silent film show this year: Harry Langdon in 'Tramp, Tramp, Tramp' (1926) on Christmas afternoon.

It was also my last show for the year, too. People responded strongly to the program, which also included Laurel & Hardy's classic short 'Big Business' (1929). So it was nice to go out on a high note.

And perhaps appropriate, as the new year brings with it several musical milestones for me:

• In the first part of January, I'm scheduled to record scores for Gloria Swanson's 'Zaza,' which is being issued on Blu-ray by Kino Lorber, and for 'Homecoming' (1928), a silent German drama being reissued by Mark Roth of ReelClassicsDVD. com.

• On Sunday, Jan. 22, the New Hampshire Philharmonic will perform the world premiere of a piece for orchestra about Mount Kilimanjaro that I've written. (Lots more on that later!)

• On Sunday, Jan. 31, I'm guest for the day of the music department at Phillips Exeter Academy in Exeter, N.H., where I'll lead workshops in improvisation and accompany a screening that evening.

• On Wednesday, Feb. 8, I make my debut "across the pond" at the Kennington Bioscope, a well-known film theatre in London, England which runs occasional silent film programs—er, programmes.

• On Sunday, Feb. 19, I'm manning the mighty Wurlitzer organ at the Orpheum Theatre in Sioux City, Iowa for a program of silent comedies, part of this year's prestigious Sioux Falls International Film Festival. I'm eager to do more theater organ, and this is a big break for me!

• On Friday, Feb. 24 and Saturday, Feb. 25, it's the 21st Annual Kansas Silent Film Festival, where I'll collaborate with Marvin Faulwell and Ben Model to accompany a wide range of shorts and features.

• On Thursday, March 2, it's a Chaplin program at the Carnegie, an art museum in Covington, Kentucky (just across the Ohio River from downtown Cincinnati), where I've appeared before and where it's always a pleasure to return.

• And on Friday, March 3 and Saturday, March 4, I'll be in Cleveland, where John Ewing, director of the Cleveland Cinematheque, has invited me to accompany screenings at the Cleveland Museum of Art as well as his theater.

I'm very grateful for the opportunity to make music in so many venues, and to work and collaborate with so many talented people.

In the years since I've returned to making music a large and regular part of my life, I've learned a lot.

I've also developed, little by little, my own sense of the musical language that works for me. And with that, I'm eager to devote more time to fully written-out pieces, either for film scoring or other opportunities, such as the N.H. Philharmonic concert next month.

So it's an exciting time. I've been telling people that in terms of music, I feel I'm finally where I hoped to be at about age 18.

For now, let me just wish everyone a great New Year's holiday.

Thank you for your interest in silent film and your support of the music that I do for it.

Hope to see everyone often in the coming year!