Two recording projects in the works:
'Homecoming' (1928) for ReelClassicsDVD,
and 'Zaza' (1923) for Kino-Lorber 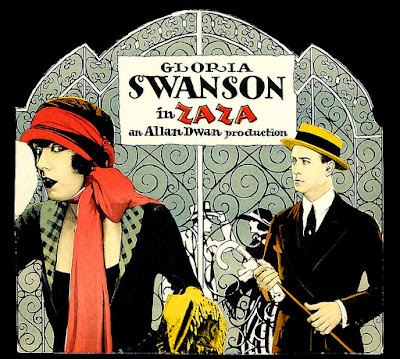 Excited about something unusual for me: not one but two separate silent film score recording projects coming up.

Tomorrow (Saturday, Jan. 14), I'll record music for a re-release of 'Homecoming' (1928), a German drama about World War II that will soon be re-issued on DVD by ReelClassicdvd.com.

And then next Saturday (Jan. 21), I'll lay down tracks for 'Zaza' (1923), the Gloria Swanson film being re-issued this spring in Blu-Ray by Kino-Lorber.

In both cases, I'll be recording the music in the recital hall of the Manchester Community Music School in Manchester, N.H. Many thanks to Judy Teehan, Valerie Gentilehomme, and the entire staff of the music school for making the space (and the nice grand piano!) available.

Also, I need to thank N.H. filmmaker Bill Millios in advance for helping me engineer the recording. I'm in the process of putting together my own set-up to record and edit music files, but I'm not quite there yet, and Bill is willing to help bridge the gap.

All this is unusual for me because until now, I've generally resisted having my film score work recorded.

Why? I don't know if this is something people can understand, but let me try to explain anyway.

I've found when I create live music in the moment, largely through improvising while a film is playing, it takes about 10 minutes or so to get into what I call the "silent film accompaniment zone."

What I mean by that is that it takes about 10 minutes for me to settle into the mental place where the music seems to flow naturally and freely from wherever it comes from.

This is the time needed for all the self-editing and self-consciousness and critical judgmental functions to fade away, at least for me. After that, the music seems to come easily.

In other words, I get to a place where my critical faculties are minimized and I stop second-guessing myself. And that's when the magic starts.

Really. The presence of a live microphone really makes my self-conscious. And it never seems to subside, and so it's much tougher to reach that "silent film accompaniment zone" where everything comes so easily.

If one thing goes wrong, I overreact. I overthink. I question myself all the more. And so on.

So rather than record anything, I've gotten along for quite awhile now thinking of myself as a "live performance" artist only: one whose work exists only in the moment, in one place, and in one way before a certain audience. To get it, you had to be there.

So what's with this sudden spurt of recording projects?

Well, a couple of things. For one, I think I've been doing silent film accompaniment long enough to have a good sense of my own style and how to use it effectively. At the risk of sounding too full of myself, I have something to contribute, however minor.

But also, I'm at a point where I sense it would be good to stretch myself—to push into areas that I've shied away from, if only for the satisfaction of making an attempt.

Writing down music (as in my Kilimanjaro Suite) is one way.

And recording it is another.

I was having these thoughts last fall when Mark Roth from ReelClassics contacted me about doing music for 'Homecoming' (1928) and a companion short, 'France and the Great War.'

So it seemed like fate or chance or whatever was in agreement that I should try to get more comfortable with recording.

After agreeing to score 'Homecoming,' I was contacted by Bret Wood at Kino-Lorber at doing music for 'Zaza' (1923), which I had accompanied earlier in 2016 at the Packard Theatre at the Library of Congress campus in Culpeper, Va.

'Zaza' was pretty big news because it's a Gloria Swanson picture that's never been reissued in modern times. So I need to thank Rob Stone at the Packard Center for bringing me in to accompany the film last year, and then for recommending me to Bret.

But Bret upped the ante by asking that I create a score using as much as possible music from an original cue sheet for the film that he'd found at the George Eastman House.

As an accompanist who specializes in creating my own music to score silent pictures, I've found that having to pieces from other people, no matter how good, is another barrier to me being able to reach that "silent film accompaniment" zone.

Even if I memorize music so that I could play it while reciting the alphabet backwards, the scoring of a film just doesn't happen naturally for me when it's someone else's stuff.

But Kino-Lorber had a vision for this, and had already paid for the cue sheet. So I gave it a look and found that every single melody in it (just the opening phrase, and no supporting chords) was something I'd never heard of in my life!

Ouch! Undaunted, I contacted the one person in the silent film world I thought would know where I could find at least a few of these pieces: Rodney Sauer, the founder and pianist of the famed Mont Alto Motion Picture Orchestra, based in Boulder, Colo.

And I'll be darned if Rodney didn't reply almost instantly with word that he had sheet music for about a dozen of the cues, accompanied by his own cheeky observation that some of them "are actually good music."

So Rodney sent what he had to me—a mix of obscure tunes, sentimental ballads, and "photoplay music" written specifically for silent film musicians to use. And for the past week, I've been reading through it and trying to "make it my own" as much as possible in advance of the recording session a week from tomorrow.

Well, wish me luck on these two recording projects. I would like to do more, but that will only happen if I can get through these without completely screwing them up.

And the trick to doing that, I think, is to somehow forget that I'm being recorded at all, and hope that the music flows naturally.

Can I do it? We'll find out soon enough!