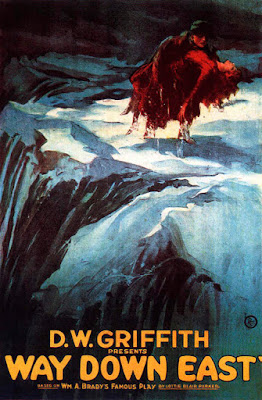 Up next: 'Way Down East' (1920), the classic D.W. Griffith melodrama that finds Lillian Gish as an unwed mother cast out of her rural community, only to wind up on an ice floe rushing toward a giant waterfall and certain doom!

Phew! Just writing that one sentence leaves me breathless!

Showtime is Sunday, Jan. 29 at 4:30 p.m. at the Wilton (N.H.) Town Hall Theatre. More about this great flick in the press release below.

Now, a few notes from the present.

Wednesday night saw an enthusiastic crowd on hand for 'The Winning of Barbara Worth' (1926) at the Rogers Center for the Arts at Merrimack College in North Andover, Mass.

We don't get many students at the Rogers screenings, but attendance has been steadily building among film buffs in the area. I think we had maybe 75 people.

And Wednesday night's audience seemed especially willing to boo the 'Jefferson Worth' character, a contractor who imperils a pioneer settlement by failing to reinforce a dam.

And for some reason, the score fell together quite effectively. More than once, I felt I came up with just the right music for important moments. Nice!

I'm not sure what things sometimes just work out, but it may be the law of averages.

Do something often enough (and I accompany about 100 live screenings a year), some will inevitably come up short, but others will surpass all expectations.

Or, to quote Groucho Marx: "They can't all be gems, folks."

In general, though, I think doing a lot of films has helped me develop my own musical language and voice that I'm now starting to use in written-down compositions.

The best example of this was my 'Kilimanjaro Suite,' a 30-minute long score for orchestra that was premiered last Sunday by the N.H. Philharmonic under music director Mark Latham. 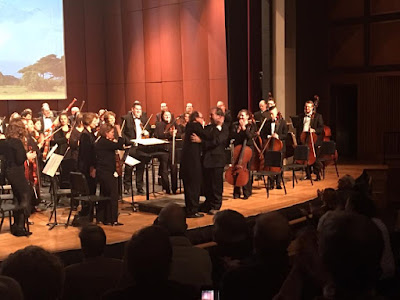 Mark Latham, at left, and me on stage after the performance of my 'Kilimajaro Suite' for orchestra.

Although this had nothing to do with silent film, I don't think I could have done it without all the accompaniment I've been doing in recent years.

(I still need to post a write-up of the whole 'Kilimanjaro Suite' experience. Coming soon to a blog near you!)

Before this Sunday's screening of 'Way Down East,' I haul myself out to Schagticoke, N.Y. (north of Albany, in the 518 area code) for one of my favorite annual gigs.

Taking place in the farm's function room, the event brings together about 100 people who now seem like old friends.

This all started when Cynthia's parents were the winning bidders of my services ("Silent Film Screening with Live Music) at a charity auction about eight years ago.

They asked if I wouldn't mind driving out to New York. I said "No problem," and the rest is history."

We usually show comedies, but this year we're taking a different approach with a "Halloween in January" approach. 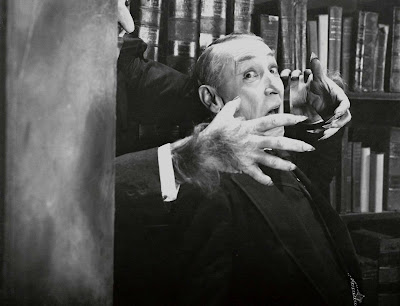 And in-between is one of the best pot luck suppers served north of the Mason-Dixon line, or any other line you can name.

Interested? Anyone's welcome to attend, as long as you bring a dish for the pot luck or make a donation to the big glass jar to help defray expenses.

(More details in the 'Upcoming Screenings' page at upper right.)

Okay, about 'Way Down East.' I did music for this some years ago at the Wilton Town Hall Theatre, and it was one of the most memorable screenings ever.

Why? Because I had prepared for the film, and didn't think it would go over too well—other than the undeniably exciting ending with Gish on those ice floes, it was too old and creaky. How could anyone take this seriously?

But Griffith, a former stage director, knew in his bones how to get a crowd excited. And so it was quite surprising to me to find the audience reacting strongly to 'Way Down East' right from the beginning.

This engagement continued throughout the picture. And when it came time for Gish to wind up on the ice floes, the place just went crazty!

So in seeing this film as it was intended—with live music and a live audience—you can still get a sense of why 'Way Down East' was one of the top-grossing films of the silent era.

You can also see what a different it makes when the original conditions of early cinema are in place: a lot of people, a big screen, live music. You get a real sense of why people fell for the movies, and fell hard. There's nothing like it! 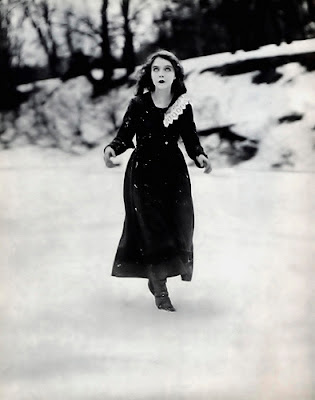 The classic shot of Lillian Gish on the ice floes.

WILTON, N.H. — The iconic image of actress Lillian Gish trapped on an ice floe and headed straight for a waterfall will once again fill the big screen when 'Way Down East' (1920) is revived on Sunday, Jan. 29 at 4:30 p.m. at the Town Hall Theatre, 40 Main St., Wilton, N.H.

Admission is free; a donation of $5 per person is suggested to help defray expenses.

The movie, a blockbuster melodrama directed by cinematic pioneer D.W. Griffith, is set in old-time rural New England, and was partly filmed on location in New Hampshire and Vermont. It stars Gish in an acclaimed performance as a wronged woman trying to make her way in an unforgiving world. Can she find love and redemption, or will she ride to her doom on the raging river's ice floes?

'Way Down East' will be screened with live music by Jeff Rapsis, a New Hampshire-based silent film accompanist.

In 'Way Down East,' Gish stars as a poor New England country girl who travels to Boston to visit her rich relatives in the hopes of getting financial help. While there, she's dazzled by upper class society and romanced by a rich womanizer (Lowell Sherman) who takes advantage of her innocence by tricking her into bed with a fake marriage ceremony.

Convinced she's found the husband of her dreams, Gish returns home to the country, only to be abandoned. She informs her faux husband she's pregnant; he orders her to get an abortion. Instead, Gish goes into exile to have the baby, finds herself persecuted for giving birth out of wedlock, and flees even further into the country to seek refuge. The film was noteworthy in its time for addressing such topics as abortion and women's rights.

Modern critics hail 'Way Down East' for Gish's performance, which continues to mesmerize audiences nearly a century after the film's release. "Gish provides an abject lesson in screen acting and brings home the importance and effectiveness of seeing a film in a theater with a crowd," wrote Paul Brenner on www.filmcritic.com in 2007. "If you are not moved at the scene of Gish baptizing her dead baby, then you should check the obituaries of your local paper to see if you are listed."

The film also stars silent era heartthrob Richard Barthelmess. In the film's climax, Barthelmess must dash to rescue Gish from being carried away on the ice floes. 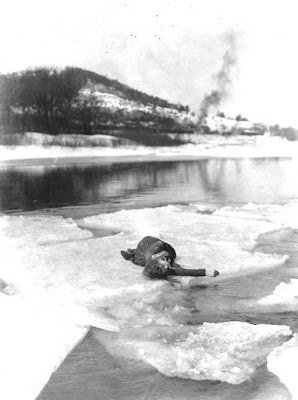 Much of the acclaimed ice floe sequence was filmed in March 1920 on location on the Connecticut River in New Hampshire and the White River in Vermont, as the winter pack ice was breaking up. No process shots or post-production special effects were available to filmmakers at the time, so Griffith and his crew had no choice but to stage and shoot it all on a real river, with the players out on the ice. To get the floes to break up and float down the river, Griffith's crew dynamited pack ice upstream.

Gish later said that she suffered frostbite by following director Griffith's command to always keep one hand in the water during the shooting.

Despite such hardships, 'Way Down East' cemented Gish's reputation as one of the silent era's major stars. Gish would continue to work in films and, later, television, until the 1980s. She died in 1993 at age 99. 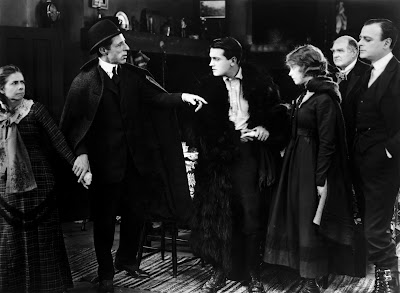 "Films such as 'Way Down East' were created to be shown on the big screen to large audiences as a communal experience," Rapsis said. "With an audience and live music, silent films come to life in the way their makers intended. Not only are they entertaining, but they give today's audiences a chance to understand what caused people to first fall in love with the movies."

'Way Down East' was based on a popular stage drama, for which director Griffith paid the then-astounding sum of $175,000 to turn into a movie. The picture proved to a be a huge moneymaker, taking in $4.5 million, making it the fourth-highest grossing movie of the silent film era. 'Way Down East' would be the last of Griffith's great blockbusters; tastes changed as the 1920s rolled on and Griffith's Victorian style fell out of favor. Receipts from 'Way Down East' kept Griffith's studio afloat during a subsequent series of box office flops.

"This picture was a monster hit when it was released," Rapsis said, "and it still holds up well today. As a melodrama, it's a great film for an audience to cheer on the good folks and boo and hiss the bad guys. But there's an additional level of interest now because the film captured a way of life that's long since disappeared."