'Jekyll & Hyde' at Leavitt on Saturday, 10/28: highlighted by Barrymore's transformation 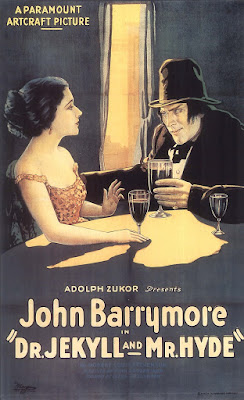 The moveable Halloween silent film marathon continues with shows through this weekend in Maine, New Hampshire, and Massachusetts.

A big one, I think, will be the annual "Chiller Theatre" show on Saturday at the Leavitt Theatre in Ogunquit, Maine.

It's called "Chiller Theatre" because Ogunquit being a seaside resort, the summer-only moviehouse lacks central heating.

But that doesn't stop us from programming a silent film show for the Saturday before Halloween, and this year is no exception.

Complete details in the press release below.

I love going out to Ogunquit for our annual "Chiller Theatre" show because although it's the off-season, Ogunquit's small downtown is usually rocking with Halloween parties.

And as Ogunquit is a gay-friendly community and home to a regional theater, more effort than usual is put into costumes that can often be utterly amazing.

So I go out early to get dinner and just enjoy the show, which even on the sidewalks can be spectacular as people parade about in their Halloween finest.

I recall one year watching a very tall man in a spectacular drag outfit, tottering along in what had to be six-inch heels and getting his wig caught in storefront awnings.

But back to 'Dr. Jekyll and Mr. Hyde,' which is highlighted by a different kind of transformation.

Let me say here that 'Jekyll' is my choice for this year's "under-appreciated creepy silent film that should get more play at Halloween."

The reason for this is even with dozens of great silents that would work well for Halloween, the same two films get shown over and over again: 'Nosferatu' (1922) and 'Phantom of the Opera' (1925).

Nothing wrong with those, but it's like anything. Too much of a good thing can be...well, not exactly wonderful, despite what Mae West once said.

So each season, I try to bring something different to the Halloween circuit: a film worthy of the occasion but not really shown very often.

Previous selections have included Alfred Hitchcock's thriller 'The Lodger' (1927) and Paul Leni's haunted house comedy/drama 'The Cat and the Canary' (1927).

This year, I felt it was time to dust off the 'Jekyll' film, which is highlighted by Barrymore's on-screen full-body transformation from the austere Dr. Jekyll into the depraved Mr. Hyde.

In presenting it, I remind people that Barrymore's performance pre-dated any kind of sophisticated special effects, so his on-screen transformation is all the more remarkable for how much of it is accomplished just using his body and facial expressions.

Also, audiences at the time would have been conditioned by decades of touring stage productions, in which whomever played the title role would have no choice but to make the transformation right there in front of everyone.

Unlike today, no one in a movie audience assumed special effects would do the heavy lifting. Although a few primitive cross-fades/dissolves are used in the movie, at the time there was an expectation that an actor would do most of the work.

And on that score, Barrymore comes through big time. As a stage actor, he knew how to deliver the goods. Here's a nice analysis of the transformation scene that gets into detail and provides a lot of context.

Enjoy! And hope you and all your personalities can join us this Saturday night at the Leavitt for 'Dr. Jekyll and Mr. Hyde.' One admission price for all your identities! 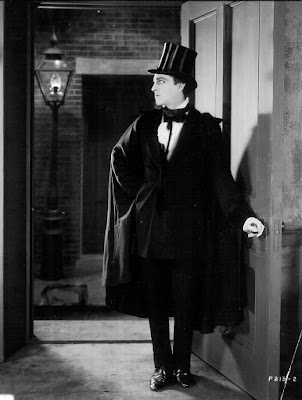 OGUNQUIT, Me.—It was first a best-selling novel, then an immensely popular stage play. So it was just a matter of time before the movies tackled 'Dr. Jekyll & Mr. Hyde,' Robert Louis Stevenson's classic tale of a man tortured by two personalities—one thoroughly good and the other completely evil.

Dr. Jekyll, a London physician and philanthropist, becomes fascinated with the dual nature of man after the profligate Sir George Carew exposes him to temptation. When Jekyll invents a potion that separates the good from the evil in a person, he decides to live both roles and names the evil persona Mr. Hyde.

Jekyll is in love with Millicent, the daughter of Sir George; meanwhile, Hyde prowls the poorer districts of London, debases and discards Theresa, a dance hall performer. Jekyll's control over Hyde weakens gradually to the point where his alter ego resorts to murder, forcing Hyde into a showdown to save his loved ones and reign in the evil he himself has spawned.

The film put Barrymore, a noted stage actor, on the cinematic map. Following 'Dr. Jekyll & Mr. Hyde,' Barrymore would go on to be one of the biggest stars of early cinema. His handsome visage, dubbed "the great profile," was instantly recognizable to movie-goers of the time, who flocked to see Barrymore in later films such as 'Sherlock Holmes' (1922), 'Don Juan' (1926), and 'The Beloved Rogue' (1927).

In screening the original 'Dr. Jekyll & Mr. Hyde,' the Brandon Town Hall aims to recreate all essential elements of silent film experience: high quality prints shown on a large screen, with live music and an audience.

For more about the music, visit www.jeffrapsis.com.
Posted by Jeff Rapsis at 12:09 PM