'Der Golem' (1920): a terrifying film today, but not for the reasons its makers intended 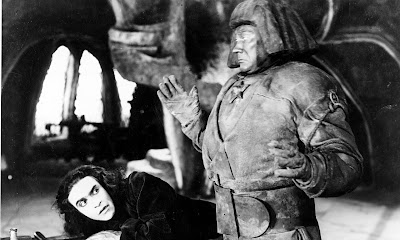 Put this one in the category of "aging ungracefully."

I'm doing music for 'Der Golem' later this week, at a screening on Thursday, Oct. 19 at 8 p.m. at the Capitol Theatre in Arlington, Mass. (More info in the press release below.)

And it's prompted some thoughts about how the film is indeed scary—but not for the reasons you might think.

Widely regarded as ancestor to the big screen version of 'Frankenstein' (1931), the silent 'Golem' enjoys a reputation as a pioneering horror film.

For those not up on Jewish folklore of 16th century Prague: the film tells the story of a local Rabbi who protects his people from persecution by create a large soldier-like figure out of clay.

The Rabbi then uses sorcery to bring the figure to life—but then things go wrong. Like the monster in Mary Shelley's 'Frankenstein' tale, unexpected consequences ensue.

'Der Golem' features weird expressionist visual designs, so it's always been a good movie for this time of year. It looks like a Halloween film.

But the big reason the film is truly chilling, I think, is how German filmmakers characterized Jews on screen in the decade leading up to Hitler's rise to power in 1933.

Consider: right at the start, the film's prologue repeats the anti-Semitic claim about how Jews were responsible for Christ's suffering and death on the cross.

And in the story, rabbis are depicted as wizards who wear pointy sorcerer hats who traffic in astrological superstition, concoct magic potions, and have dealings with the underworld.

It's true that in 'Der Golem,' non-Jews don't come off much better: in one scene, crowds of Gentiles openly laugh at the story of Moses leading the Hebrews out of Egypt, which brings down immediate physical wrath.

But it's stunning to see how a film made in Germany at that time could depict Jews essentially as cartoon characters—not quite sub-human, but certainly "different" from the rest of us "normal" people.

And to me, it's our knowledge of what would soon happen that makes 'Der Golem' really, really frightening. Watching it, and seeing the wild caricatures baked so casually into it, provides an unintentional first-hand look at attitudes that would fuel the coming Holocaust.

I realize 'Der Golem' was not intended as a propaganda film. its agenda is not to dehumanize Jews. But that's exactly what makes it so frightening today—knowing what we know now, we see things that are far more telling that anything the filmmakers intended.

And it's really frightening: a vision of evil that shows how real it can be, and also how commonplace.

This is one of the great values of older cinema, I think: its ability to show us first-hand attitudes and ideas of a bygone era.

And one more point: although some may find the characterization of Judaism offense in 'Der Golem,' that doesn't mean it shouldn't be shown.

On the contrary: nearly a century after its release, 'Der Golem' can help us understand past prejudices, and also help us examine our own times.

Just as the Rabbi breathes life into his clay figure, 'Der Golem' can breathe life into the commonplace nature of prejudice.

With our knowledge of history, we can see how it unknowingly depicts the circumstances and attitudes that would soon lead to one of humanity's worst episodes.

Having said all that, it's still a well-made film and worth catching, especially if you need to jump start your Halloween season.

I'd welcome your own thoughts and comments, either here or in person if you attend our screening this week. Details in the press release below: 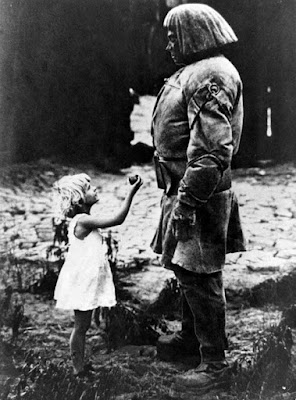 Prepare for Halloween with drama about man of clay brought to life; film was forerunner of 'Frankenstein'

ARLINGTON, Mass.—'The Golem' (1920), a German film about a man made of clay and brought to life, will be screened with live music on Thursday, Oct. 19 at 8 p.m. at the Capitol Theatre, 204 Massachusetts Ave., Arlington, Mass.

The film will be accompanied live by silent film musician Jeff Rapsis. Admission is $12 adults, $10 kids and seniors.

In 'The Golem,' set in 16th century Prague, a Rabbi creates a giant human-like figure from clay, called the Golem.

Using sorcery, the Rabbi brings the creature to life in order to protect local Jews from persecution.

But the experiment gets out of hand, with the Golem imperiling the very community he was created to protect.

"Taking in a film such as 'The Golem' is a good way to get in the mood for Halloween," Rapsis said.

'The Golem,' directed by Paul Wegener, uses surrealistic sets and lighting to create an eerie mood. The story is taken from a medieval Jewish legend.

In addition to directing, Wegener appears in the film as 'The Golem' when the clay creature is brought to life.

'The Golem' was sensational upon its release and has left a lasting legacy within the movie industry, alongside another early German expressionist horror film, 'The Cabinet Of Dr. Caligari' (1920).

Architect Hans Poelzig designed the sets, a reproduction of the medieval Jewish ghetto of Prague. He created them specifically for the movie camera, using highly expressionist imagery. The cinematography of Karl Freund, in collaboration with Poelzig and Wegener, is cited as one of the most outstanding examples of German Expressionism of Weimar period cinema.

'The Golem' will be accompanied by live music by Jeff Rapsis, a New Hampshire-based silent film accompanist who performs at venues across the region and beyond.

"Films such as 'The Golem' were created to be shown on the big screen and in a theater as a shared experience," Rapsis said. "With an audience and live music, they still come to life in the way their makers intended them to.

"So the Capitol Theatre's silent film screenings are a great chance for people to experience films that caused people to first fall in love with the movies," he said.

'The Golem' is the latest in an monthly series of great silent films with live music at the Capitol Theatre. The series provides local audiences the opportunity to experience silent film as it was intended to be shown: on the big screen, in good-looking prints, with live music, and with an audience.

The film will be accompanied live by silent film musician Jeff Rapsis. Admission is $12 adults, $10 kids and seniors.
Posted by Jeff Rapsis at 12:13 PM