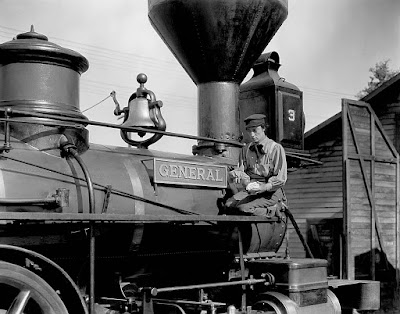 The recent 50th anniversary of the assassination of Martin Luther King Jr. (on Wednesday, April 4) got me thinking about race as it relates to Buster Keaton's 'The General' (1926).

I'm doing live music for a screening of 'The General' on Thursday, April 12 at the Capitol Theatre in Arlington, Mass., so I've been thinking about the film anyway.

Of course any film set during the U.S. Civil War is a potential powder keg when it comes to racism in cinema.

But in the case of 'The General,' I'd like to focus on one particular element that I never quite understood.

Late in his life, Buster would often reminisce about how he and his team went about making pictures during the 1920s.

And one thing he said about 'The General' was something I didn't understand for a long time.

For their Civil War story, Buster and co-director Clyde Bruckman adapted the true-life "Andrews Raid" tale of a Northern railroad engineer whose locomotive was stolen by Southern spies.

But for the film, they turned the tale around: they made the hero a Confederate railroad engineer, while the spies were from the Union.

As Buster later flat-out stated, "You can always make villains out of the Northerners, but you cannot make a villain out of the South."

Okay, but why? Does this notion, which Buster stated so matter-of-factly, reflect some kind of story-telling wisdom that I just didn't understand?

Buster was raised as a child star on the vaudeville stage, so his instincts were pretty solid regarding how an audience would react to a narrative.

Not being a child star myself, I just assumed this was some kind of hard-won story-telling knowledge that Buster just knew, although it didn't make any logical sense to me.

I mean, 'The General' wasn't some kind of 'Gone With the Wind' situation, where the fact that the South lost was an integral part of the story. (And in 'The General,' the South is triumphant, at least for the moment.)

Well, much later, I began learning about the extent of segregation in movie theaters throughout the U.S., and especially in the southern states. 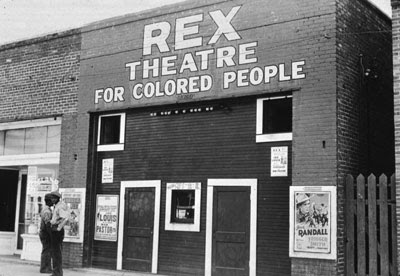 As a white kid growing up in New Hampshire, I had no idea theaters such as this were once commonplace in parts of the nation.

I think this reality, coupled with the fact that the Civil War was within living memory of many people in the 1920s, was what Buster was getting at when he said you can't make a villain out of the South.

If you're going to tell a story, why structure it in a way likely to alienate a large portion of your potential audience?

After all, the North won. So it wasn't such a big deal for them to play the bad guys in a story from the period.

But in the South in the 1920s, portraying the Confederacy as villains would amount to box office poison.

This was especially true in an era when races had their own separate theaters and programming, meaning that below the Mason-Dixon line, 'The General' would be playing to all-white audiences.

So Keaton's "cannot make a villain out of the South" comment was actually more about knowing his audience than anything else, at least as I see it.

It would be interesting to study stage dramas about the Civil War that toured in the late 19th century, to see if the same pattern held. Anyone?

Back in Keaton's world, I believe the same thinking was behind the "A scratch is nothing to a Southern gentleman" motif in a later Keaton film, 'Spite Marriage' (1929). Even the corny stage play within the movie portrays the North as bullying aggressors and the south as innocent victims.

It was a practical decision. To do otherwise might mean bad box office in a big area of the country.

Does this mean Keaton was complicit in the systematic racism that prevailed during the Jim Crow era? 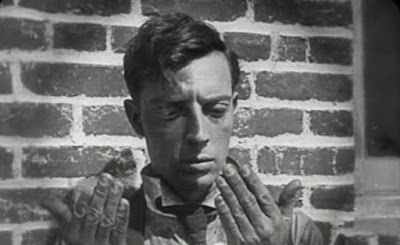 Buster examines the racial divide in the short comedy 'Neighbors.'

I think that's reading too much into the situation. From what I understand, Keaton was no more racist than most other people at the time.

That's reflected in his films, which are largely free of the truly blatant and degrading racism that often shows up in movies of the era.

But every now and then with Keaton, you do get something that's now somewhat cringe-worthy.

One example often cited is the "colored restaurant" sequence in 'College' (1927), in which Keaton makes up in absurdly unconvincing blackface to get work. 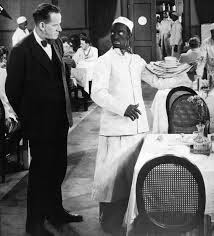 But that's not racism on Keaton's part—he's merely using a common institution of the time to get laughs, which is the only thing he always claimed he was trying to do.

I think it falls into the category of "ethnic humor," something a lot more common in that era than today.

A more troubling example mars 'Seven Chances' (1925), when Keaton's desperate search for a bride prompts him to follow a woman from behind as she walks down a street.

When Keaton catches up to her, the view switches so we can see...she's black! Keaton immediately withdraws, a sour expression on his face.

Meant as comedy, it betrays an attitude that a person should be judged by skin color, which I think does cross the line into racism.

Again, I don't hold this against Keaton, who was just going for a laugh in a way that audiences at the time would have accepted.

But is it wrong?

On that question, I must say I was heartened by the response to this sequence when I screened 'Seven Chances' for an audience of middle schoolers awhile back.

They loved the film and right from the start responded strongly to all of Buster's antics.

But when the "black woman" gag came up, instead of laughing, they began hissing. Actual hissing, with some booing mixed in.

Clearly, these kids recognized racism when they saw it, and their rejection of it was spontaneous and genuine.

Curiously, it didn't spoil the experience. After this brief episode, they went right back to laughing at 'Seven Chances.'

So I take heart in the ability of at least one group of middle schoolers to recognize racism, but also demonstrate some understanding of context in which it took place.

There's hope for us after all.

And I hope that would please Dr. King.