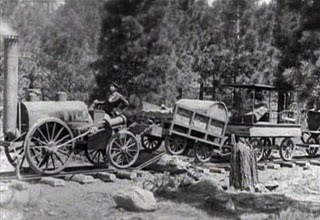 The replica of Stephenson's 'Rocket' locomotive, piloted by his Buster's father Joe Keaton in 'Our Hospitality.'

It must have been a kick for Keaton and his team to recreate this engine for their 1830s story. Keaton recalled they chose the "Rocket" because of all the early railroad locomotives, the "Rocket" looked the funniest.

It says something about Keaton's understanding of cinema that he took the trouble of totally recreating a functioning mechanical part of the past for his story—not just for comedy purposes but also to lend authenticity to his story.

The effort paid off in a unique sequence that remains a highlight of 'Our Hospitality' nearly a hundred years after it was made.

See for yourself on Saturday, April 14 at 6:30 p.m., when I'll accompany a screening of 'Our Hospitality' at the Antrim (N.H.) Grange. The screening is a fundraiser for the Granite Building Restoration Fund; there's more info in the press release below.

But when 'Our Hospitality' wrapped, what happened to the Rocket?

This made sense, as the comedy was directed by his St. John's uncle, Roscoe 'Fatty' Arbuckle, the by-then-disgraced comedy star who had earlier been Buster's movie-making mentor. Hey, what's a railroad engine replica among friends?

And after that—well, who knows? I thought I read somewhere that Keaton's replica wound up in the Smithsonian Institution. But a quick check on the always-reliable Internet indicated that's not the case.

Of Keaton's 'Rocket' after 'The Iron Mule,' Wikipedia has this to say:

"The subsequent whereabouts of the replica are unknown. There are, however, at least two other replicas of Rocket in the USA, both built by Robert Stephenson and Hawthorns in 1929; one is at the Henry Ford Museum in the Metro Detroit suburb of Dearborn, Michigan, the other at the Museum of Science and Industry, Chicago.

Well, a working railroad locomotive doesn't just evaporate. So if anyone knows the fate of the 'Rocket' used in 'Our Hospitality' and 'The Iron Mule,' let me know.

Okay, below is the press release with info about 'Our Hospitality' on Saturday, April 14. Hope to see you there! 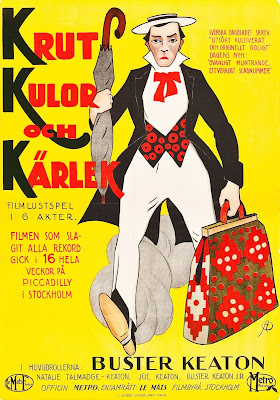 Buster Keaton stars in 'Our Hospitality' on Saturday, April 14 at Antrim Grange

ANTRIM, N.H.—Silent film star Buster Keaton returns to the big screen for a showing of his classic comedy 'Our Hospitality' (1923) with live music on Saturday, April 14 at the Antrim Grange #98, 253 Clinton Road, Antrim.

The show, a fundraiser for the Grange's building restoration, starts at 6:30 p.m. The family-friendly program is open to all.

Admission is a suggested donation of $5 per person, with all proceeds going to support the Grange's building restoration fund.

Live music for the program will be provided by Jeff Rapsis, regarded as one of the nation's foremost silent film accompanists. 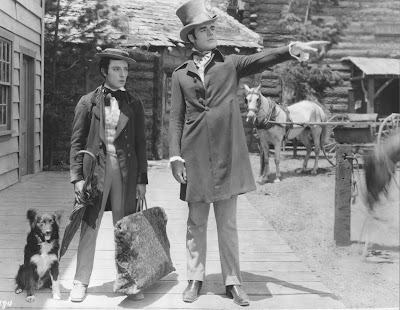 Buster gets directions in 'Our Hospitality.'

Highlights of the picture include Keaton's extended journey on a vintage train of the era, as well as a dramatic river rescue scene that climaxes the film.

Keaton, along with Charlie Chaplin and Harold Lloyd, stands today as one of the silent screen's three great clowns. Some critics regard him as the best of all; Roger Ebert wrote in 2002 that "in an extraordinary period from 1920 to 1929, (Keaton) worked without interruption on a series of films that make him, arguably, the greatest actor-director in the history of the movies."

While making films, Keaton didn't think he was an artist, but merely an entertainer trying to use the then-new art of motion pictures to tell stories and create laughter. 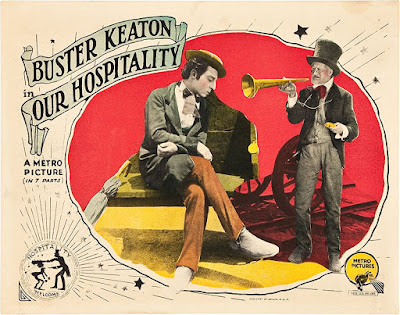 An entirely intuitive performer, Keaton entered films in 1917 and was quickly fascinated with them. After apprenticing with popular comedian Roscoe "Fatty" Arbuckle, Keaton went on to set up his own studio in 1920, making short comedies that established him as a one of the era's leading talents.

A remarkable pantomime artist, Keaton naturally used his whole body to communicate emotions from sadness to surprise. And in an era with no special effects, Keaton's acrobatic talents meant he performed all his own stunts.

In 1923, Keaton made the leap into full-length films with 'Our Hospitality,' which proved popular enough for him to continue making features for the rest of the silent era.

Although not all of Keaton's films were box office successes, critics later expressed astonishment at the sudden leap Keaton made from short comedies to the complex story and technical demands required for full-length features.

‘Our Hospitality’ will be shown on Saturday, April 14 at 6:30 p.m. at the Antrim Grange #98, 253 Clinton Road, Antrim. Admission is free, with a suggested donation of $5 person to help the Grange's building restoration fund.
Posted by Jeff Rapsis at 7:23 AM