'Who's supposed to be the hero?' and other questions about Fritz Lang's Nibelungen films 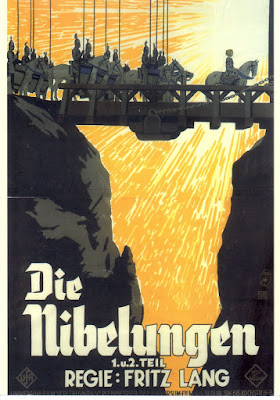 All is not sunny in the lands of the Nibelungen.

After the grim ending of 'Kriemheld's Revenge' (1924), maybe we were all in need of a chuckle.

During the audience Q & A following the film, a young fan got a loud laugh with this simple question.

"Just who is supposed to be the hero in this film?"

I had to say: beats me! With so much treachery, the Nibelungen tales as realized by Fritz Lang in his two-part silent extravaganza don't lend themselves to easy answers.

Probably the best response came later: a guy came up to me afterwards and suggested that perhaps the story's true hero was the dragon, who gets sacrificed in the first 10 minutes of the five-hour saga. 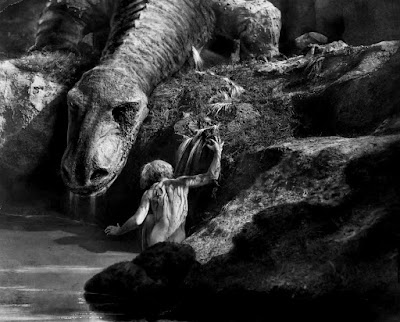 Siegfried bathes in the blood of the just-slain dragon.

Maybe. He's just about the only creature, human or otherwise, who doesn't do anything bad to anyone in the story. He's just there minding his own dragon business, but of course he has to be slain. He's a dragon, after all.

Such were the conversations following this weekend's screening of both parts of Lang's Nibelungen epic: 'Siegfried' (1924) on Saturday, April 28 and 'Kriemheld's Revenge' (1924) on Sunday, April 29.

Both screenings took place at the Town Hall Theatre in Wilton, N.H., which I consider my home field and where we run a monthly series of silent films with live music.

This was quite a challenge to take on. But it would not have happened at all without the support of long-time theater owner/operator Dennis Markaverich. Thanks, Dennis!

Dennis, a life-long film fanatic, is the reason the Town Hall Theater often shows up on lists of New England's best places to see a movie.

Creating music for these two films, which really do add up to about five hours of running time, was a really satisfying experience.

Musically, I tend to go for the big gesture, and the Nibelungen legends and Lang's approach both lend themselves to this approach. There's a reason Wagner turned to the same material for his four-opera Ring cycle!

So for me, the films were a chance to take a set of themes and really work with them over a long narrative arc. 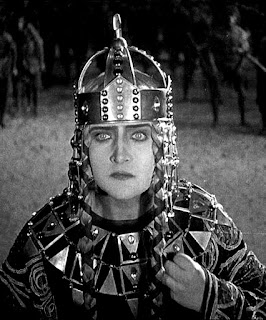 As an example: I came up with a melody associated with Kriemheld that underwent quite a transformation as the story progressed.

In the first film, she's the woman of Siegfried's dreams. In the second film, she's pissed and out for revenge.

So her theme at first was a classic eight-bar "love" melody in the style of Tchaikovsky or Andrew Lloyd Weber.

But later, as things turned dark, the melody turned sour, and then got chopped up and became something of a war cry.

It was still Kriemheld's tune, however, and I think that helped everything hold together.

Overall, I enjoyed the two-part challenge, and received a lot of good comments afterwards. So if Dennis is up for it, we might try some others at the Town Hall Theatre. 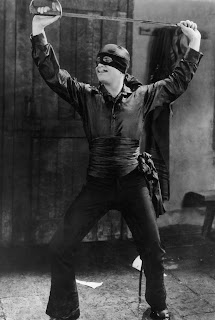 In both cases, the first film is a little creaky, while the second is much more polished, which shows how far film technique had come in such a short time.

And if it's more Fritz Lang you want, how about running his also-five-hours-long film 'Dr. Mabuse, the Gambler' (1922) in two parts over two days?

Looking ahead: next performance for me will be piano accompaniment for 'The Phantom Bullet' (1926), a Universal Western starring Hoot Gibson.

It's screening on Saturday, May 4 at the Niles Essanay Silent Film Museum in Fremont, Calif., so redeem those frequent flyer miles and join me!

After that, May has a crowded calendar of shows back home here in New England. The schedule is heavy with comedies and Westerns, so hope to see you at an upcoming screening.
Posted by Jeff Rapsis at 7:58 AM