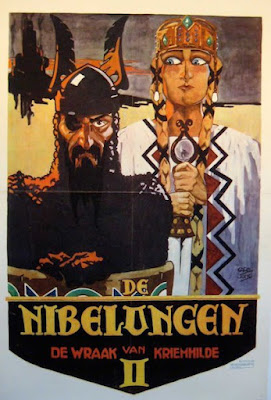 A vintage poster for 'Kriemhild's Revenge.'

Fritz Lang's 'Nibelungen' films are packed with magic. But the real miracle today was the audience.

On a beautiful Saturday afternoon—one of the first this spring—about 50 people turned up for our screening of 'Siegfried' (1924), the first of Lang's two-part epic. 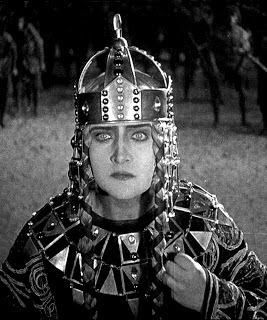 Taken together, the films add up to almost five hours in length. So we're showing them over two days, somewhat like the 'Harry Potter' plays running in London and now New York.

I thought the music for 'Siegfried' came together well. It took me awhile to get into "the zone," but one there it all flowed pretty effectively.

For 'Siegfried,' I borrowed the "leitmotif" technique from composer Richard Wagner, who developed signature melodies for main characters in his 'Ring' operas.

Something like that happened this afternoon. Each character had a tune, or at least a fragment, that helped tell the story as it unfolded on the screen.

Most of the "tunes" were actually short phrases that could be reshaped in many different ways depending on what was going on.

Siegfried, for example, had a simple two-part "call and answer" phrase that was proved really flexible as the movie progressed.

It could communicate triumph, despair, determination, and so much else. It appeared high in the treble, deep in the bass, and sometimes as an inner voice when other things were happening.

The only character to get a full eight-bar melody was Kriemhild, who was represented by a tune that starts out like "My White Night" from 'The Music Man' but quickly goes in other directions.

That same tune will be transformed quite a bit in 'Kriemhild's Revenge,' in which the title character takes her frustrations out on a large scale.

What does that mean? Come to the screening and find out!
Posted by Jeff Rapsis at 11:12 PM