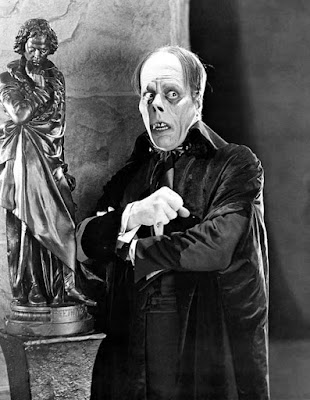 Lon Chaney as the Phantom: A face worth reacting to.

It's a movie-going experience worth screaming about.

Really! It's the original silent version of 'The Phantom of the Opera' (1925), which we're running on Halloween night (Wednesday, Oct. 31) at the Colonial Theatre in Keene, N.H.

Details in the press release below. But what about that screaming?

For the first third of the picture, the title character (played by Lon Chaney) sports a smooth mask that conceals his face.

Why? Well, we find out when the mask suddenly gets removed, revealing his true visage.

The mask-removal scene is an early masterpiece of timing and suspense, I think. The way it's edited, and of course Chaney's hideous make-up job, led Universal to warn theaters that doctors should be stationed at all screening to attend to those prone to fainting.

What an experience that must have been to early movie-goers! And it's hard for us to appreciate these days, nearly a century later, because—well, we've just seen it all.

But there IS a way to recapture some of that early shock that 'Phantom' gave audiences. And it's to employ the audience itself.

When I accompany 'Phantom' screenings around Halloween, I tell the crowd that they have a role to play.

When the Phantom is unmasked, their job is to scream. Loud!

And they do—sometimes for quite awhile. And the screaming, with the music rising up underneath and Lon Chaney glowering at the camera, creates a kind of emotional tidal wave that I think captures a something of the magic that early cinema offered its audiences.

I wouldn't do this at any other time of the year. (But then does 'Phantom' ever get shown other than at Halloween?) But around Halloween, it seems to help the film connect with people, many of whom are unfamiliar with silent film.

Plus it's pretty cool to actually hear a lot of people scream all at once. How often do you get a chance to experience that?

So think asking people to purposefully scream at the unmasking isn't turning the 'Phantom' into a gimmicky novelty or diminishing the film's impact.

I look at it like the sequence in 'Peter Pan' (1924) in which the audience is encouraged to applaud to restore Tinkerbell to life. It can really add to the experience, and encourage people to explore what else vintage cinema has to offer.

Trick or treat! And if you're anywhere near Keene, N.H., lend your voice to our chorus of screams by attending 'The Phantom of the Opera' on Wednesday, Oct. 31 at 7 p.m. Details below. 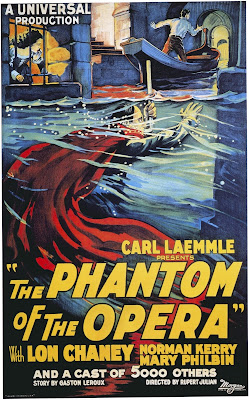 'Phantom of the Opera' with live music at Colonial Theatre on Wednesday, Oct. 31

KEENE, N.H.—Get into the Halloween spirit with a spooky silent horror film!

'The Phantom of the Opera' (1925), the silent big screen adaptation of the classic thriller, will be shown with live music on Wednesday, Oct. 31 at 7 p.m. at the Colonial Theatre, 95 Main St., Keene, N.H.

Live music will be performed by silent film accompanist Jeff Rapsis. Admission is $6.50 per person.

It's an atmosphere that silent film accompanist Jeff Rapsis will try to enhance in improvising live music on the spot for the screening.

"The original 'Phantom' is a film that seems to get creepier as more time passes," said Rapsis, who is based in New Hampshire and frequently accompanies films throughout the state. "It's a great way to celebrate Halloween, and also the power of silent film to transport audiences to strange and unusual places."