Taking a different approach to Halloween:
this year, no plan or pattern whatsoever!

Let's see. Tomorrow it's Frankenstein. Friday it's Houdini. On Saturday, it's Satan. And Sunday, a Hunchback.

With an appointment calendar like that, Halloween can't be far off. And sure enough, the big day itself arrives Wednesday next week, when I have a date with the Phantom of the Opera. 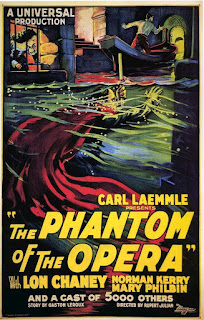 It's the busiest time of the year for silent film accompaniment. The calendar is packed with screenings for boys and ghouls in search of an other-worldly experience.

Hence I'm keeping appointments with everyone from the Vampire Nosferatu to Mephistopheles, a.k.a. Satan.

This variety is a change for me. For previous Halloweens, I've generally picked one film to concentrate on accompanying, and then taken it around to all the various venues looking for a silent film spook fix.

By concentrating on one film for Halloween and taking it on tour, so to speak, I could really get to know the picture, and so burnish the improv-based accompaniment to a high gloss.

Well, not this year. This time around, it's a different title for nearly every screening. The only repeats: two Phantoms and two Hunchbacks. Otherwise, it's one-offs throughout the season.

Which I don't mind. It's a different kind of challenge to create music for a variety of films, one after another. And I've always felt that for me, the key to doing it well was doing it a lot. 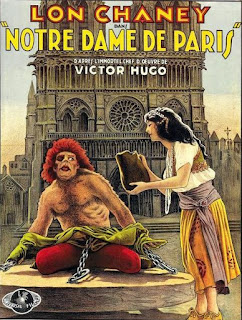 That's what happened last week, which included a four-day stretch of shows in three different states. On Thursday in Massachusetts, it was 'Hunchback of Notre Dame,' followed by 'Wings' (a non-Halloween title!) on Friday up in Maine. Then on Saturday, it was the German thriller 'Der Golem' (1921) over in Vermont then on Sunday 'The Phantom of the Opera' down in Massachusetts again.

And I have to say, but by the time I sat down at the keyboard on Sunday night at the Aeronaut Brewing Co. in Somerville, Mass., I felt I was playing with a fluency and ease that simply wasn't present when I started the four-day run.

So doing it a lot, and mixing up the titles to challenge myself, really seems to work for me.

Does it work for you? Find out by attending one of the upcoming Halloween screenings on my calendar:

• Sunday, Oct. 28, 2018, 4:30 p.m.: "Hunchback of Notre Dame" (1923) starring Lon Chaney; Wilton Town Hall Theatre, Main Street, Wilton, N.H.; (603) 654-3456; www.wiltontownhalltheatre.com. Just in time for Halloween! Lon Chaney stars in the original screen adaptation of Victor Hugo's classic novel about a deformed bellringer in medieval Paris. A moving and timeless drama filled with classic scenes and capped with a thrilling climax! Monthly series of silent films with live music at a theater where movies have been shown since 1912! Admission free, donations of $5 per person encouraged.