That's what the last half of October feels like to a silent film accompanist.

Simply put, it's the busiest time of the year. And as you work your way through a calendar booked solid with screenings of 'The Hunchback of Notre Dame' and 'Phantom of the Opera,' the days (and nights) begin to blur. 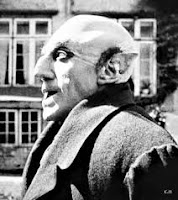 By the time Halloween itself rolls around, you begin to feel the way Max Schreck looks in 'Nosferatu.'

Speaking of which, that's the next one up: on Sunday, Oct. 14, I'll accompany the original vampire movie at The Center for the Arts in the Natick, Mass.

The fun (meaning "fun" as in "funeral") begins at 4 p.m. Better to run film before sundown in case any real vampires are lurking about.

The one tricky thing about doing music for 'Nosferatu' is a clock that strikes 12 to signal midnight's arrival. It happens twice, so I guess it's actually two tricky things.

It's a small clock, and has an external striking mechanism (a skeleton hitting a gong) that's clearly visible when the clock appears on camera.

However, in both cases, the clock begins striking 12 before it's seen by the audience. Rather, the characters on screen hear it first, before we in the audience get to see it.

So in both cases, you have to know when to start the chiming. And you have to pace it to match the slow, deliberate pace of striking depicted in the movie.

And in order to fit in exactly 12, you have to continue for a couple of strokes after the camera cuts away.

For this sound, I use what I call a "dingy bell," which is one of those small rounded bells mounted to hotel desks or store counters. Hit the button on the top, and it delivers a nice crisp 'Ding!'

If it all works out, and you actually do fit in exactly 12 dings, steadily and as the sense of terror grows around it, the effect is truly ominous.

So can I manage to start in time so that all 12 strokes fit in naturally? Only one way to find out!

For more info and details about 'Nosferatu,' please check out the press release below.

And don't blink, because then it'll be Nov. 1, and you'll have missed it. 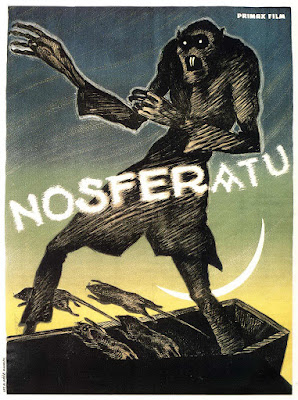 NATICK, Masss.—Get into the Halloween spirit with a classic silent horror film!

The program will feature live music for the movie by silent film accompanist Jeff Rapsis. Admission is $10 per person for members; $12 for non-members. Tickets are available online at www.natickarts.org or at the door. 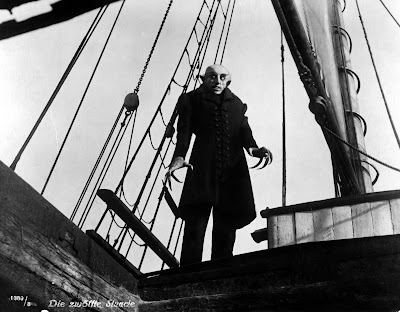 It's an atmosphere that silent film accompanist Jeff Rapsis will enhance in improvising live music on the spot for the Red River screening. 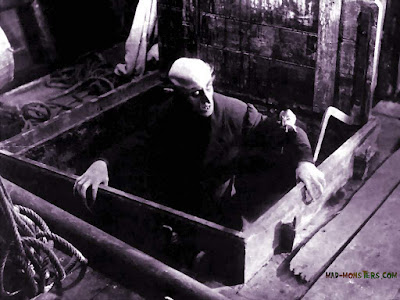 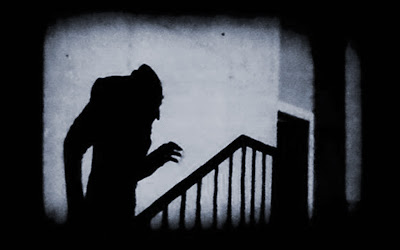 ‘Nosferatu’ will be shown on Sunday, Oct. 14 at 4 p.m. at the TCAN Center for the Arts, 14 Summer St., Natick, Mass. Admission is $10 per person for members; $12 for non-members. Tickets are available online at www.natickarts.org or at the door.